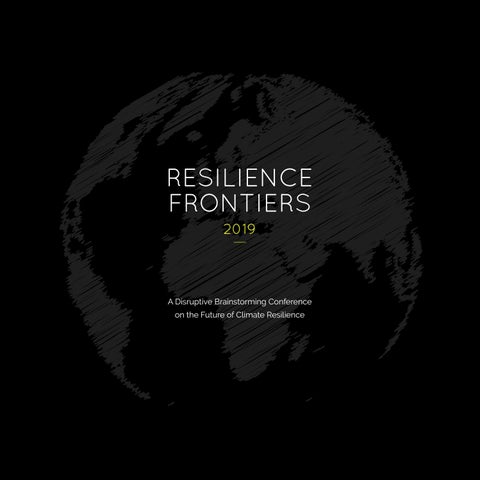 A Disruptive Brainstorming Conference on the Future of Climate Resilience

Governments, organizations and individuals require a long-term outlook and a comprehensive approach to build resilience to the adverse effects of climate change. In practice, this raises numerous questions: how can we think long term without envisioning the

challenges and opportunities associated with the fourth industrial revolution, including the evolution of frontier technologies and their ethical, social, political, and environmental implications? What will be the possible evolution of emerging social trends powered by a sustainability ethos, such as local and organic production and consumption practices, or the growing recognition of indigenous knowledge systems and practices? Can we merge climate change impacts scenarios with various scenarios of socially and economically transformed versions of todayâ&#x20AC;&#x2122;s world so as to inform climate change adaptation plans? Can we go beyond the extrapolation of current trends so as to best mitigate and/or preempt risks that could increase the vulnerability of various population groups to climate change? Can we consider that frontier technologies and emerging social trends will play a major part in enhancing climate-resilience, if this is what society values, aims for, and undertakes? The Resilience Frontiers brainstorming conference utilized strategic foresight methods, and mobilized innovative collective intelligence processes to bring answers to those questions. Imagining the multiplicity of possible future scenarios opened up a space to co-create visions of a desirable climate-resilient future, as well as discuss the underlying changes in values, institutions and complex support systems. Numerous risks that we need to address today could also be reduced by a change in trajectory towards a world economic system that would be regenerative by design instead of degenerative by default. Co-creating engaging visions of the future is thus critical to both designing ambitious, transformative and policy-relevant pathways towards climate-resilience, and to catalyzing action to foster their emergence.

b. The action pledge

It contributes to fostering innovation and furthering the exploration of frontier issues launched by the United Nations Chief Executives Board for Coordination. Resilience Frontiers strives to identify pathways that would enable the implementation of transformative approaches to climate-resilience and contribute to regenerating the global ecosystem. The design of pathways is supported by the definition of policy-relevant roadmaps for the next decade. This ‘roadmapping exercise’ will be spearheaded by intergovernmental organizations and other relevant entities. In parallel, a nexus of supporting experts, organizations and initiatives has been set up. The outcomes of the roadmapping exercise and of parallel activities undertaken by the nexus will feed into the work on enhancing ambition and implementation in relation to adaptation to climate change both within the UN system as well as in other institutions engaged in resilience.

With this approach we are helping participants to play with different scenarios of the future, not just to think outside of the box but to imagine there is no box. Loes Damhof

whom do not work directly on the issue of climateresilience. Participants were given the opportunity to enhance their understanding of the implications of future climate change impacts, as well as to build partnerships to address those impacts collaboratively.

b. Co-design in practice The foresight methodology applied at Resilience Frontiers 2019 was co-designed by the UNFCCC secretariat, UNESCO, the foresight consultancy futur/io, as well as other advisory partners including, 4CF, the gannaca global think tank group, Exponential Minds, and the Hanze University of Applied Sciences. The methodology was tailored to this brainstorming conference, with the objectives of building on participantsâ&#x20AC;&#x2122; complementary expertise, and of maximizing collective capacity for strategic foresight, in order to:

Ensure that the evolution of existing and upcoming frontier technologies (i.e. artificial intelligence, including autonomous systems, blockchain, the Internet of things; biotechnology; satellite technology), and their potential environmental, socio-political and ethical opportunities and risks, are addressed in envisioning long-term global resilience; Enable foresight-centred collective thinking among experts in those frontier technologies, purveyors and practitioners of the emerging sustainability ethos (including indigenous peoples)

and experts who specialize in ‘basic needs’ (i.e. water, food, health, nature and human security); Deliberate on the most effective institutional setups to foster an optimal enabling environment for transformative and regenerative climate resilience beyond 2030, by addressing the necessary shifts, retooling and transformation of finance, education, international law and governance, human habitats, as well as values.

“ breakthrough technology. The resulting Moonshot projects support visionary leadership by creating a bold vision of the future for a community built around common values. Besides, in order to boost the ‘out-of-the-box’ or ‘no-box’ thinking of participants, as well as build a community, innovative features were introduced to produce a unique human experience. Inspired by the gannaca global think tank group’s experiential formats, those features included evolving room set ups, singular aesthetics in communication products, facilitating online networking, enabling the participation of artists, projecting artwork in the conference room, and organizing guided mindfulness sessions and Zen meditation.

We have a window of opportunity in the next few years to do some transformative change in order to prevent the world from entering into a period where we cannot handle the impacts of climate change. This has to be done from now!. Youssef Nassef

Elements of the UNESCO’s well-established Futures Literacy Laboratory (FLL) action-learning framework and of future/io’s Moonshot approach were combined to co-design a strategic foresight methodology that facilitated the expression of collective intelligence. The UNESCO’s FLL action-learning framework is based on anticipatory systems theory. The framework enables participants to discover and specify, by moving from tacit to explicit and from conventional to newly invented, the anticipatory assumptions and related narratives used to perceive and plan for the future. Since we live in a complex universe, we need to respond to phenomena that pop into our existence to usher in new possibilities that were previously unimaginable. The FLL actionlearning framework helps build anticipatory systems to embrace this complexity, and to better ‘use-thefuture’ in planning for it. The futur/io’s Moonshot approach uses different exercises and canvases to help participants define individual or collective long-term projects that will generate massive financial value, create positive social and environmental impacts aligned with the underlying objectives of the Sustainable Development Goals for millions of people, and mobilize emerging drivers of change, including

To enable transdisciplinary dialogue, each participant exhibited professional experience in at least two clusters of expertise. Participants were identified with the support of our advisory partners, and with recommendations from other partner organizations, which also provided valuable support for their attendance. Experienced facilitators, as well as researchers from United Nations University (UNU), the International Centre for Climate Change and Development (ICCCAD) and Stratsearch Foundation, who took detailed notes of the deliberations, volunteered to support the event. The full list of partner organizations and volunteers is available below in the acknowledgements section.

Visualizing probable futures under the impact of the fourth industrial revolution: Working groups envisioned the evolution and implications of emerging soft and hard technologies, as well as new social trends powered by a sustainability ethos, as drivers shaping our future by 2030 in a climate-changed world.

Envisioning desirable futures in a climate-resilient world: Through individual Moonshot exercises, working groups visualized and discussed desirable futures in a post-2030 climate-resilient world, which was defined as meeting the basic needs of the world population in a way that would strengthen the resilience to climate change of individuals, societies, economies and ecosystems. For that purpose, working groups deep-dived into the opportunities and challenges arising from the preceding discussions on drivers of change, insofar as they relate to meeting the basic needs of the world population beyond 2030 in a climate-resilient way. This step also included numerous exercises to disrupt general assumptions and biases about the future, in order to be more creative in generating â&#x20AC;&#x2DC;visions of desirable futures in

Refining visions, and formulating underlying questions: Working groups refined their visions and raised underlying questions that would serve as a basis in the definition of crosscutting objectives and possible pathways to be investigated through the roadmapping exercise.

b. Keynotes, facilitation and documentation of the results The event consisted of a succession of brainstorming sessions and plenary discussions, interspersed with keynote contributions given by foresight experts. Further information on the keynote speakers is available the Resilience Frontiers website. During the brainstorming sessions, the participants were broken down in groups of 7 to 9 experts each, so as to facilitate discussion and collective brainstorming. Group discussions were facilitated by experienced facilitators trained in

UNESCOâ&#x20AC;&#x2122;s FLL methodological approach and in futur/ioâ&#x20AC;&#x2122;s Moonshot approach. For each 7-to-9-person working group, a content integrator took detailed notes of the deliberations, to ensure traceability of the outcomes of the brainstorming conference process. Lastly, each working group shot short videos to present their last collective Moonshot ideas to the wider group, which contributed to further documenting the results of the deliberations.

a. Highlights of the visions The 2030 visions for future resilience co-created at Resilience Frontiers 2019 break away from traditional approaches to adaptation to climate change, by introducing a transformative and regenerative approach to climate resilience. In those visions, a global change in consciousness towards a â&#x20AC;&#x2DC;nature-firstâ&#x20AC;&#x2122; culture fosters a (re-)connection to the global ecosystem, which drives individuals and societies to assume their responsibility in the stewardship of nature. The health of ecosystems, including all living beings, is understood as both a central condition and core criterion for human resilience to climate change, and thus for human security worldwide. A global system change translating into new forms of habitats, as well as social and economic practices enables the

continuous regeneration of societies, economies and ecosystems. This takes place against the backdrop of a wide application of frontier technologies and of a retooled financial system. Equitable access to data becomes a global public good and fosters inclusive public dialogues.

Building on local and indigenous practices and knowledge, as well as inclusive public dialogues, to foster a ‘nature-first’ global culture

Ensuring universal equitable coverage of, and open-access to, (big) data and information relevant to climate resilience

Facilitating conservation, restoration and equitable management of natural resources, particularly in regard to water resources and biodiversity

6. CONCLUDING WITH THE NEXT STEPS

b. Parallel actions and initiatives undertaken by partners and participants In parallel, participants in Resilience Frontiers 2019 and other relevant experts who are part of the Resilience Frontiers nexus are welcome to undertake complementary actions to achieve the articulated visions, within the purview of their respective entities. Such actions are indicated and monitored on an online platform that facilitates ongoing engagement. Open communication on those actions, and on their

contribution to the objectives of Resilience Frontiers, is also encouraged. Insofar as those complementary actions relate to knowledge production for resilience, organizations are encouraged to register them as â&#x20AC;&#x153;action pledgesâ&#x20AC;? under the UNFCCC Nairobi Work Programme on Impacts, Vulnerability and Adaptation to Climate Change, and share the outcomes of their work via the Adaptation Knowledge Portal.

Resilience Frontiers 2020, the next edition of the brainstorming conference, will contribute to the iterative process of the roadmapping exercise by providing a live platform to discuss progress. It will also enable to take stock and review the outcomes of complementary actions implemented by experts and organizations from the nexus.

All actions count to achieve the cross cutting objectives towards a climate-resilient world defined on page 11. Besides, if your expertise spans across two of the clusters of expertise mentioned on page 6, and you who would like to be part of the Resilience Frontiers nexus, please contact the UNFCCC secretariat via the Resilience Frontiers website.

Acknowledgements and thanks Youssef Nassef, Laureline Krichewsky, David Oehmen and Alexandra Kriegsheim, from the organizing team at the UNFCCC secretariat, would like to acknowledge the priceless contributions of organizations and experts who volunteered their support, and made this event possible. Our heartfelt thanks go to:

benefited from the interventions of Suwon Lee, Gaston Meskens, Lorena Medina, Maxime Simon and Silke Van Cleuvenbergen. Maxime Simon also produced 3 drawings to illustrate the brainstorming process, which can be seen on the Resilience Frontiers website. 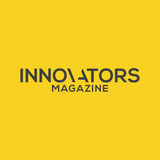 The Resilience Frontiers Initiative is a Nairobi work programme joint-action pledge under the UNFCCC, and an interagency effort coordinated...

The Resilience Frontiers Initiative is a Nairobi work programme joint-action pledge under the UNFCCC, and an interagency effort coordinated...