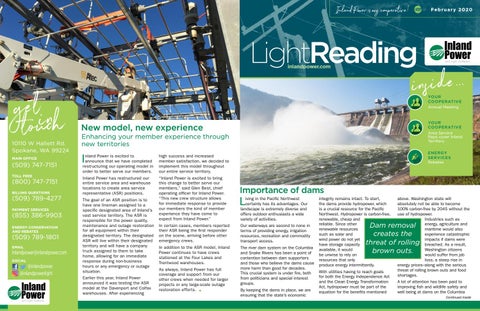 Inland Power is my cooperative!

inside... YOUR COOPERATIVE Annual Meeting

Enhancing your member experience through new territories nland Power is excited to announce that we have completed restructuring our operating model in order to better serve our members.

high success and increased member satisfaction, we decided to implement this model throughout our entire service territory.

“Inland Power is excited to bring this change to better serve our members,” said Glen Best, chief operating officer for Inland Power. “This new crew structure allows for immediate response to provide our members the kind of member experience they have come to expect from Inland Power.”

The goal of an ASR position is to have one lineman assigned to a specific designated area of Inland’s vast service territory. The ASR is responsible for the power quality, maintenance and outage restoration for all equipment within their designated territory. The designated ASR will live within their designated territory and will have a company truck assigned to them to take home, allowing for an immediate response during non-business hours or any emergency or outage situation. Earlier this year, Inland Power announced it was testing the ASR model at the Davenport and Colfax warehouses. After experiencing

iving in the Pacific Northwest certainly has its advantages. Our landscape is extremely diverse and offers outdoor enthusiasts a wide variety of activities.

In certain cases, members reported their ASR being the first responder on the scene, arriving before other emergency crews.

Our waterways are second to none in terms of providing energy, irrigation resources, recreation and commodity transport access.

In addition to the ASR model, Inland Power continues to have crews stationed at the Four Lakes and Trentwood warehouses.

The river dam system on the Columbia and Snake Rivers has been a point of contention between dam supporters and those who believe the dams cause more harm than good for decades. This crucial system is under fire, both from politicians and special interest groups.

As always, Inland Power has full coverage and support from our other crews when needed for larger projects or any large-scale outage restoration efforts.

By keeping the dams in place, we are ensuring that the state’s economic

integrity remains intact. To start, the dams provide hydropower, which is a crucial resource for the Pacific Northwest. Hydropower is carbon-free, renewable, cheap and reliable. Since other renewable resources such as solar and wind power do not yet have storage capacity available, it would be unwise to rely on resources that only produce energy intermittently.

above. Washington state will absolutely not be able to become 100% carbon-free by 2045 without the use of hydropower. Industries such as energy, agriculture and maritime would also experience catastrophic impacts if dams were breached. As a result, Washington citizens would suffer from job loss, a steep rise in energy prices–along with the serious threat of rolling brown outs and food shortages.

With utilities having to reach goals for both the Energy Independence Act and the Clean Energy Transformation Act, hydropower must be part of the equation for the benefits mentioned

and Snake Rivers. We should continue to focus our efforts on furthering those improvements as they have been proven to be successful. When looking at fish population numbers, it is crucial to focus on all data contributors. A great deal of attention is directed to fish return numbers and dam passage,

while other highly impactful factors that come into play regarding fish population are ignored. Harvest numbers, nonnative predators such as sea lions and effects of increasing water temperatures all play a large role in fish population numbers. Numerous studies show that a high rate of fish pass through the

dams each year. If the state is really looking to improve fish numbers, it is imperative that we investigate all of the factors that contribute to declining fish numbers. Dams must be considered as the huge asset they are to Washington state and its continued growth and success.

Dams are harmful to the fish population.

Dams are not clean energy producers. Hydropower is not as efficient as wind and solar power.

In 1990, approximately 500 wild Snake River fall Chinook returned to the Columbia River Basin. In 2017, an estimated 16,965 Snake River fall Chinook returned. Passage rates for juvenile migrating fish are at or above survival standards of 96 percent. Hydropower produces no emissions. There are no gases or waste products that contribute to air pollution. Hydropower serves as a “back-up” when wind and solar aren’t producing during calm wind or dark periods. By adjusting the amount of water flowing through the dams, hydropower can be increased or decreased very quickly to meet changes in demand for power. This meets a fundamental requirement of all electric grids, which is that demand must exactly match supply at all times to keep the system stable and your lights on.

Your Co-op Connection | Getting to know who works for you

Glen Best has been with Inland Power since 1997. Prior to joining Inland, he worked for British Columbia Hydro and Power Authority in Golden, B.C., which is a small town of 5,000 people. “I love working for our members,” Glen said. “Being able to interact with so many members on a weekly basis has always been such a delight. I also enjoy working with our amazing team. Inland is like a family so coming to work is fun and no two days are ever the same.” Outside of work, Glen enjoys hunting, fishing, skiing and working on his property. He also enjoys spending time with his wife, five children and seven grandchildren.

Are you planning updates for your home? Inland Power and Light offers rebates for members who buy and install new, energy efficient home upgrades. Before you make major upgrades to your home, such as buying a new appliance or installing new windows, contact Inland Power by emailing conservation@ inlandpower.com or call (509) 789-1801. Your energy experts will help you save money as you apply for rebates and use less electricity each month. Visit inlandpower.com for a complete list of rebates Inland Power offers.

Check out some of our most popular rebates below: Heat Pumps

Home upgrades? Check out our incentives!

Heat pumps are one of the most energy efficient types of heating available today. A properly installed heat pump can deliver 1.5 - 4 times more heat energy to a home than it consumes. This is possible because heat pumps move heat rather than convert it from fuels such as electricity, natural gas, oil or propane. Inland is pleased to offer two heat pump rebate programs; ducted and ductless heat pumps.

Energy Star clothes washers and dryers use less energy and water. Although they cost a little more at time of purchase, the up-front costs are made up with savings on the member’s utility bill in just a few years.

Insulation is a classification of materials that are used to reduce heat transfer from the inside and outside of a building. Most commonly, insulation is used in attics, ceilings, walls, floors and crawl spaces to help maintain more constant, comfortable temperatures in your home.

nland Power’s annual meeting is a time for members to join together to learn about the current happenings at your cooperative as well as elect your board of trustees. This year’s annual meeting will be held Thursday, March 19, 2020 from 5:30 p.m. to 7:30 p.m. at Northern Quest Casino. As a member of Inland Power, you own your cooperative. That ownership comes with benefits including local control and accountability, meaning your choice of co-op leaders. Inland’s board is comprised of nine trustees, seven of which represent a specific geographical district and two represent the cooperative at large. Inland Power trustees serve three-year terms and are typically elected on a rotating basis at each annual meeting. Each active membership is entitled to one vote for each district up for election either by mail, electronically or in person at the annual meeting. Look for voting ballots and materials to be mailed out in mid-February. Election results will be announced at Inland Power’s annual meeting on Thursday, March 19, 2020, Light Reading and online. Aside from voting on your cooperative leadership, members will hear an update on the cooperative’s financial status from Inland treasurer Dick Ziehnert as well as the state of the coop from CEO Chad Jensen. As always, members in attendance will be entered into a drawing for door prizes. Additionally, members who vote online or by mail-in ballot will be entered to win a variety of prizes. For more information regarding this year’s annual meeting, contact your member services department at (509) 789-4277 or visit inlandpower.com. 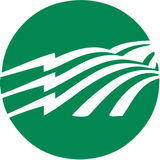