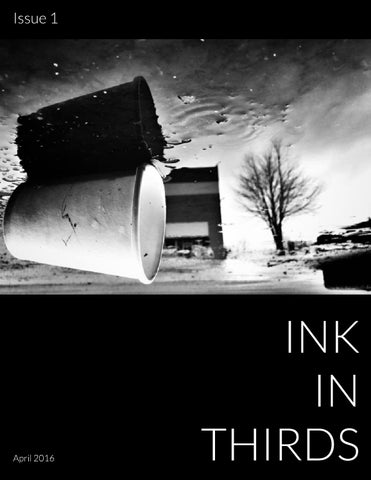 CONTENTS Prose A Salve for the Soul Antibodies Artefact Between the Notes Blue Baby Mr. Lo-Fi Rooted We Were Sisters

Poetry Cassie and the Sun Haiku Melodies Of Oath and Stone Remodel The Abbey on the Cliffs the Moon, the Mirror The Shotgun Queue There Is Comfort in the Sound Three Line Poetry Tinder

All rights reserved. Copyright in the body reproduced herein remains the property of the individual authors / artists and permission to publish acknowledged by the publisher. No part of this publication may be reproduced, or transmitted in any form or by any means, electronic or otherwise, without written permission from the author(s) or artist(s) herein.

Prose We Were Sisters We measured the distance between our house and the store in verse, how many times we could sing ?Red, Red Robin?: three times on the way, four going back (we were never in a hurry to get home). Neither of us knew we were too young to be out in that grim neighborhood by ourselves. Our mother must have known, but she sent us anyway. She needed her pop. I pulled a crumpled food stamp from my pocket to pay for the glass bottle. You insisted on carrying the load, even though you were smaller and younger. You wanted to be big like me. We were on the third round of our song when you jumped over a crack (Don?t wanna break Momma?s back, you said). The pop slipped from your fingers and there was a shattering sound as the bottle smashed into the sidewalk, chunks and slivers of green glass left lying in a puddle of sugar and caffeine. You moved and a piece of glass jabbed your bare foot. I pulled it out while you cried, strands of sun-washed hair clinging to your soft, wet face. I held your hand as you hopped on one foot the rest of the way home. We had no pop and no food stamps, and I took the blame. It was me who dropped the bottle, I said. You were already bleeding.

Antibodies The clouds come in, lower the ceiling of light, and we bump our heads. You flip a coin and decide it is Taco Bell instead of McDonald?s. We drive around in your old Chevy pickup, buy food with quarters. You squeeze a hot sauce sachet around my ring finger while we talk about your childhood, shots, and homework? the reality slipping away, temporarily held by words. We become a family as we grow quiet and brush our hands against each other. Looking at the bare pavement, we contemplate what would we draw if we had chalk. The light changes and it seems the air is blurred with dusk. When you pass the cigarette, I touch your skin a little longer: it is familiar, the expecting skin of another teenager. The world is reduced to our breath and hollow rings of smoke, and the pinch in my soul is brief. Like I&#39;ve had a vaccination. And love circulates in my blood slowly creating antibodies of doubt and fear as if they always exist together.

Our song came on the radio today, except it wasn?t ours; it was my song. I had a song for us, a secret song. You?ve heard it today, many times I&#39;m sure, maybe at the same time? together but far apart. This song and you are synonymous in my mind, but you&#39;re unfazed by its lyrics, undisturbed by its melody. Between the notes is where we?ll remain, my memories of us haunting the moments of silence I fill with noise.

BETWEEN THE NOTES CC Photo

by Jacqueline Frasca Photo by Matt Adamik 3 | Ink In Thirds

THERE IS COMFORT IN THE SOUND

The Shotgun Queue what never changes in the collision of miniature brains and massive egos in the same room whether it happens to be the red necked fuckwit on a trip towards his own slaughter or the back room crook head cocked as if the hinge has stiffened when the last word became stuck in the spit congealed, marooned on the saloon bar wall rust veined and pulsed in the space between his vacuum filled lobes is the nicotine choke of songs born from the remains of railroad blues

what never changes in the collision is the outcome of crap scratching the boards of every west coast this side of every east coast played in the smog of a thousand licks less the trouble of playing chords and a riff stuck to the neck of another Fender failure. Jesus, Dylan your genius has cost us dear the genie is stuck. His fat arse won?t squeeze passed the neck of the bottle. Now he?s the roadie for every would be, won?t be God help us, can?t be new you, Bowie Morrison and the shotgun queue lengthens behind me.

Tinder I am offered many lanterns yet what it is I want to hold . . . all these lanterns float on sills, visible from space, cold. Photo by Matt Adamik

I admire each one briefly

The Abbey on the Cliffs

in my palm and dream of the new expanse? John Wayne cocks a gun, boots in the sand? a galaxy, a small brightness. So, eternity. And prescience. The wind and water name, the calm

of sleeping in on Sundays, skipping the old Westerns. by James Croal Jackson 7 | Ink In Thirds

Rise up abbey wave your celibacy in our passionate faces, splash your seclusion on our immediate and extended families, hurl your nave, your sacristy, your scriptorium, at us from within the stone walls of your hive of cells we&#39;ve got our own nests to go home to. You&#39;re fearful that God doesn&#39;t love you enough. I&#39;m happy enough as a sea-bird. by John Grey

Melodies It was the first time I sang into the night. The kind of melody that breaks a bent will, and the broken twigs rejoiced under my feet? they like to gossip when the sun retires to foreign lands.

A Salve for the Soul Torvin ran down the beach with the fervency of a child pursuing a departing ice-cream truck. His legs slipped in the sand accentuating an already loose running style, his arms flailed beside him flapping the air as if seeking purchase for flight. At the water?s edge, he stuttered to a halt, skipping on his toes as a surge of water washed up further than its predecessor. The heat of the early summer sun was not felt in the water. The sand had been warm, pleasant underfoot, but the water was still icy cold, fed by long months of winter weather. Suddenly the desire to swim in the open water was tempered. He stood, either side of a threshold. From the ankles down the world was cold, almost icy. Above that, the sun was a warm salve, a cloak of rejuvenating vitality. Could he remove it by immersing himself in the ocean? Dare he? The water called him and he stepped forward. One step, two, three. The water edged up his ankles, over his knees. Now was the time for decisions. Commit to the cold, or paddle here for a few minutes before retreating up the beach. He sucked air in, fortifying himself for the shock to come, and dove into an oncoming wave. Coming out the other side he felt free. Doubt and fear had been abandoned. Cowardice had been left behind, sloughed away by a saline wash. Arm over arm he drove forward, the cold water biting through his skin, searing his blood, cauterizing the agony. With each stroke forward he forgot. Eventually, he was able to turn, to swim side on to the shore and strike for the distant jetty. Soon he was free, swimming with a grace unseen in his running.

Cassie and the Sun after the legend of Cassandra and Apollo I was kneeling on the temple floor when you came to me and said, in the voice Reg Presley would lend The Troggs, ?Cassie, babe, I think I love you.&quot; And you touched my face like you meant it, but ? and there?s always a but ? you didn?t. It was poison, bee venom, ghosts of the future. Fuck prophecy. I just needed a power nap, and there you were, trying to take my dress off with the lyre of your slow honey tongue. ?No no no,? I said, but you played the piano of my teeth, all like Franz Liszt, and you freed all the doubt in the world instead of Willy Wonka?s candy. I can still see your naked statue, Apollo Belvedere, frozen like those people of Pompeii will be, or were, or are ? this madness rips the grey blood from my throat. Anyway, I could still see you, and your light bathing Helen as she marched into Troy with Paris and the Eiffel Tower. I could see myself, Agamemnon?s blood-gold trophy ? I could see my death, I could see the fall of Man, the Twin Towers, the Ottoman Empire, and Enron. But I opened my mouth, and all that ever came out was, ?I didn?t want,? and nobody believed me.

CONTRIBUTORS RL Black RL Black is EIC of two online journals and her own writing has been published across the web and in print. When she isn&#39;t reading or writing, she binge watches her DVD collection of LOST. http://rlblackauthor.tumblr.com

F.E. Clark F. E. Clark is based in North East Scotland, where she paints and writes, taking inspiration from the magical landscape around her. She shares her artwork and experiences on her website: www.feclarkart.com, where her blog has a whole section devoted to her ?hat status?.

Taylor Eaton Taylor Eaton is California native who, after traveling across Europe and the US, finally migrated back to her hometown in Southern California. Journaling, blogging, fiction-ing ? she?s always found herself at her happiest when she has a pen, paper, and an hour to kill. Her work has appeared in various literary magazines, but you can find her flash fiction on her site: www.littlewritelies.com

Kyle Hemmings Kyle Hemmings lives and works in New Jersey. He has been published in Elimae, SmokelongQuarterly, ThisZine Will Change Your Life, Blaze Vox, Matchbook, and elsewhere. He loves 50s Sci-Fi movies, manga comics, and pre-punk garage bands of the 60s. http://upatberggasse19.blogspot.com/

James Croal Jackson James Croal Jackson graduated from Baldwin Wallace University with degrees in film and creative writing. Some of his poems have recently appeared in Whale Road Review, Rust+Moth, and Ping-Pong. He moved from Los Angeles to Columbus, OH after a summer spent living in his Ford Fiesta across thirty-seven states. Find more of his work at jimjakk.com.

Nolan Liebert Nolan Liebert hails from the Black Hills where he lives with his wife and children. His proximity to the Sanford Underground Research Facility feeds his obsession with dark matter, as his farmboy roots fed his obsession with herbs and alchemy. His literary experiments appear or are forthcoming in An Alphabet of Embers, Liminality, and elsewhere. You can find him editing Pidgeonholes or on Twitter @nliebert. http://nolanliebert.wordpress.com/

Voima Oy Voima Oy lives on the western rim of Chicago, near the expressway and the Blue Line trains. Her writing can be found in the Flash Dogs anthologies and online at Paragraph Planet, Visual Verse, Microcosms and The Angry Hourglass. Proud FlashDog. http://welcometoveridian.wordpress.com

Santino Prinzi Santino Prinzi is currently an English Literature with Creative Writing student at Bath Spa University and helps with National Flash Fiction Day (UK). He was a recipient of the TSS Young Writers Award for January 2016, and was awarded the 2014/15 Bath Spa University Flash Fiction Prize. His flash fiction and prose poetry has been published, or is forthcoming, in various places including Litro Online, Flash Frontier, CHEAP POP, the 2014 and 2015 National Flash Fiction Day (UK) anthologies, Unbroken Literary Journal, and was selected for The Best of Vine LeavesJournal 2015. His website is https://tinoprinzi.wordpress.com and his Twitter is @tinoprinzi.

"A magazine of poised prose, precarious poetry, and photography that makes us want to pilot our own realms again." 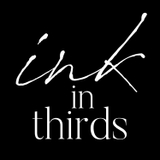 More from Ink In Thirds