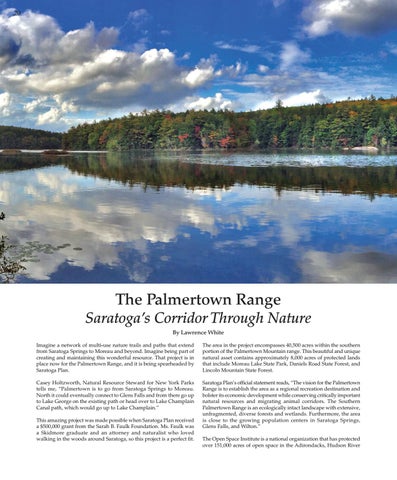 The Palmertown Range Saratoga’s Corridor Through Nature By Lawrence White Imagine a network of multi-use nature trails and paths that extend from Saratoga Springs to Moreau and beyond. Imagine being part of creating and maintaining this wonderful resource. That project is in place now for the Palmertown Range, and it is being spearheaded by Saratoga Plan.

The area in the project encompasses 40,500 acres within the southern portion of the Palmertown Mountain range. This beautiful and unique natural asset contains approximately 8,000 acres of protected lands that include Moreau Lake State Park, Daniels Road State Forest, and Lincoln Mountain State Forest.

Casey Holtzworth, Natural Resource Steward for New York Parks tells me, “Palmertown is to go from Saratoga Springs to Moreau. North it could eventually connect to Glens Falls and from there go up to Lake George on the existing path or head over to Lake Champlain Canal path, which would go up to Lake Champlain.”

Saratoga Plan’s ofﬁcial statement reads, “The vision for the Palmertown Range is to establish the area as a regional recreation destination and bolster its economic development while conserving critically important natural resources and migrating animal corridors. The Southern Palmertown Range is an ecologically intact landscape with extensive, unfragmented, diverse forests and wetlands. Furthermore, the area is close to the growing population centers in Saratoga Springs, Glens Falls, and Wilton.”

This amazing project was made possible when Saratoga Plan received a $500,000 grant from the Sarah B. Faulk Foundation. Ms. Faulk was a Skidmore graduate and an attorney and naturalist who loved walking in the woods around Saratoga, so this project is a perfect ﬁt.

The Open Space Institute is a national organization that has protected over 151,000 acres of open space in the Adirondacks, Hudson River