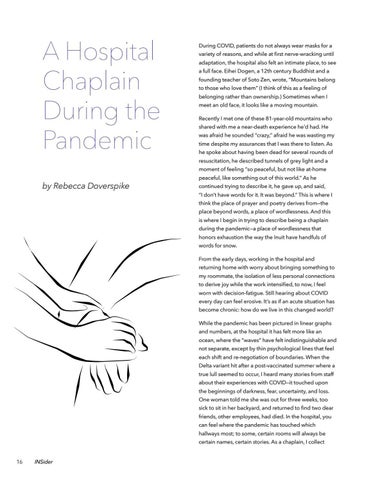 A Hospital Chaplain During the Pandemic

During COVID, patients do not always wear masks for a variety of reasons, and while at first nerve-wracking until adaptation, the hospital also felt an intimate place, to see a full face. Eihei Dogen, a 12th century Buddhist and a founding teacher of Soto Zen, wrote, “Mountains belong to those who love them” (I think of this as a feeling of belonging rather than ownership.) Sometimes when I meet an old face, it looks like a moving mountain. Recently I met one of these 81-year-old mountains who shared with me a near-death experience he’d had. He was afraid he sounded “crazy,” afraid he was wasting my time despite my assurances that I was there to listen. As he spoke about having been dead for several rounds of resuscitation, he described tunnels of grey light and a moment of feeling “so peaceful, but not like at-home

peaceful, like something out of this world.” As he continued trying to describe it, he gave up, and said, “I don’t have words for it. It was beyond.” This is where I think the place of prayer and poetry derives from—the place beyond words, a place of wordlessness. And this is where I begin in trying to describe being a chaplain during the pandemic—a place of wordlessness that honors exhaustion the way the Inuit have handfuls of words for snow. From the early days, working in the hospital and returning home with worry about bringing something to my roommate, the isolation of less personal connections to derive joy while the work intensified, to now, I feel worn with decision-fatigue. Still hearing about COVID every day can feel erosive. It’s as if an acute situation has become chronic: how do we live in this changed world? While the pandemic has been pictured in linear graphs and numbers, at the hospital it has felt more like an ocean, where the “waves” have felt indistinguishable and not separate, except by thin psychological lines that feel each shift and re-negotiation of boundaries. When the Delta variant hit after a post-vaccinated summer where a true lull seemed to occur, I heard many stories from staff about their experiences with COVID—it touched upon the beginnings of darkness, fear, uncertainty, and loss. One woman told me she was out for three weeks, too sick to sit in her backyard, and returned to find two dear friends, other employees, had died. In the hospital, you can feel where the pandemic has touched which hallways most; to some, certain rooms will always be certain names, certain stories. As a chaplain, I collect