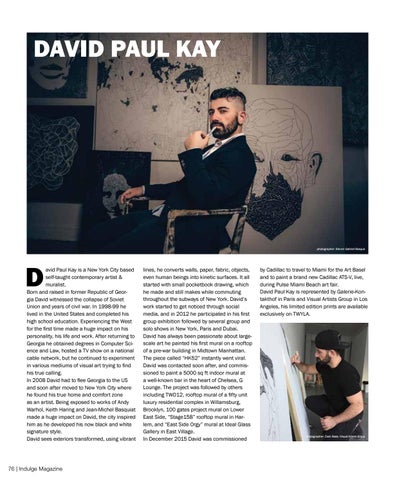 avid Paul Kay is a New York City based self-taught contemporary artist &amp; muralist. Born and raised in former Republic of Georgia David witnessed the collapse of Soviet Union and years of civil war. In 1998-99 he lived in the United States and completed his high school education. Experiencing the West for the first time made a huge impact on his personality, his life and work. After returning to Georgia he obtained degrees in Computer Science and Law, hosted a TV show on a national cable network, but he continued to experiment in various mediums of visual art trying to find his true calling. In 2008 David had to flee Georgia to the US and soon after moved to New York City where he found his true home and comfort zone as an artist. Being exposed to works of Andy Warhol, Keith Haring and Jean-Michel Basquiat made a huge impact on David, the city inspired him as he developed his now black and white signature style. David sees exteriors transformed, using vibrant

lines, he converts walls, paper, fabric, objects, even human beings into kinetic surfaces. It all started with small pocketbook drawing, which he made and still makes while commuting throughout the subways of New York. David’s work started to get noticed through social media, and in 2012 he participated in his first group exhibition followed by several group and solo shows in New York, Paris and Dubai. David has always been passionate about largescale art he painted his first mural on a rooftop of a pre-war building in Midtown Manhattan. The piece called “HK52” instantly went viral. David was contacted soon after, and commissioned to paint a 5000 sq ft indoor mural at a well-known bar in the heart of Chelsea, G Lounge. The project was followed by others including TWO12, rooftop mural of a fifty unit luxury residential complex in Willamsburg, Brooklyn, 100 gates project mural on Lower East Side, “Stage158” rooftop mural in Harlem, and “East Side Orgy” mural at Ideal Glass Gallery in East Village. In December 2015 David was commissioned

by Cadillac to travel to Miami for the Art Basel and to paint a brand new Cadillac ATS-V, live, during Pulse Miami Beach art fair. David Paul Kay is represented by Galerie-Kontakthof in Paris and Visual Artists Group in Los Angeles, his limited edition prints are available exclusively on TWYLA.