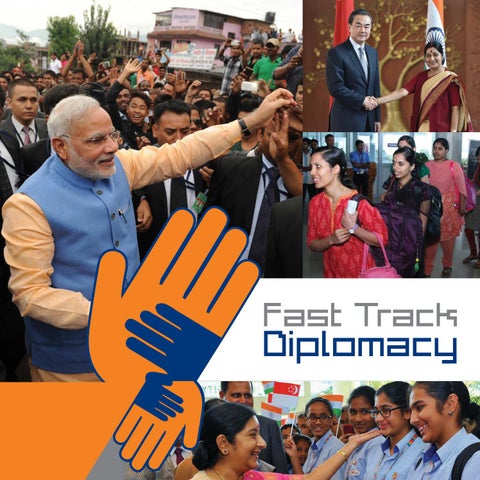 reinforced the importance that these countries attach to enhancing the substantive underpinnings of their strategic ties with India.

• The historic invitation extended to the leaders of eight countries for his swearing-in ceremony set the tone and tenor for a new paradigm in India’s foreign policy. It was a triumph of statesmanship for the new government and was considered by many as a ‘Diplomatic Masterstroke’.

• The BRICS Summit marked Shri Modi’s successful debut on the global stage. The agreement to establish the New Development Bank, and also the decision to have an Indian as its first President marked a major achievement for the new government in the international arena. Meeting with Latin American leaders was also a significant highlight.

• The Prime Minister, along with the External Affairs Minister Smt. Sushma Swaraj, spent the first day at work meeting leaders of the SAARC nations and Mauritius. This signified the priority placed by the new government on strengthening the bonds of friendship and development partnerships in India’s South Asian neighbourhood. • The government’s reassurance to its neighbours, including Afghanistan, Bangladesh, Bhutan, Maldives, Nepal and Sri Lanka that India will continue to value and strengthen its close and enduring relations with them has imparted a renewed vigor in the South Asian region. The invitation to Pakistan’s Prime Minister reflected India’s hope and commitment to build cordial bilateral ties in an environment free of terror and violence. • Oman’s Foreign Minister was the first visitor received by the new government. Foreign Minister of Uganda was the first African leader to visit India after the formation of the new government. • The visits of envoys of P5 countries (China, Russia, France, UK and US) to India in quick succession,

• The visits of the External Affairs Minister Smt. Swaraj to Myanmar, Singapore and Vietnam have taken India’s ties with the East to a new high-speed phase, from ‘Look East’ to ‘Act East’. • The Prime Minister’s visit to Japan, and the elevation of our ties to that of a Special Global Partnership, has ushered a new dawn in Indo–Japan relations. • The government’s full support to help rescue and return of Indians caught in the midst of conflict zones in Iraq, Libya and Ukraine ensured the safe homecoming of nearly 10,000 Indians. • The decision to provide passport services in all states in the North East of India; the elimination of shortage of passport booklets and simplification of procedures to get passports reflects the government’s continuing commitment to streamline and optimise the delivery of citizen-centric services, as does the launch of an online system of tracking the transportation of the mortal remains of Indians abroad.

• Day Zero: Beginning of the diplomatic drive with invitations being sent to the leaders of all SAARC countries and Mauritius for the swearing-in ceremony of the new government. • This unprecedented move creates positive vibes, which experts considered to be a ‘masterstroke’.

• Prime Minister Shri Narendra Modi and the External Affairs Minister Smt. Sushma Swaraj meet the leaders of the SAARC nations and Mauritius. • The meeting signifies that building strong foreign relations and forging development partnerships in our region is a priority for the new government. • The clear message conveyed is that India is all set for a more pro-active role as a regional and global player.

• Prime Minister Shri Narendra Modi visits Bhutan on his first international visit. • Shri Modi addresses the joint sitting of the Parliament in the Gyalyong Tshogkhang. • Shri Modi calls for ‘B4B’ – Bharat for Bhutan and Bhutan for Bharat’, implying that the security concerns for the two nations are intertwined and common, as is the vision of development.

Reaching out to Bangladesh

Friend from Across the strait

Strong Ties of History • The United Kingdom’s Secretary of State for Foreign Affairs and Commonwealth Affairs Mr William Hague visits India along with Chancellor of the Exchequer Mr George Osborne; followed by the visit of Deputy Prime Minister Mr Nick Clegg with a trade mission to India.

• Discusses ways to strengthen cooperation in key areas such as defence, trade and investment with India; expresses interest in setting up industrial bases in India to boost ties.

• UK expresses intention to open up investment opportunities for its firms in India’s defence and infrastructure sector, and also attract Indian investment into Britain; discusses cooperation in security issues, building people-to-people ties and matters relating to restructuring/reform of the UN Security Council.

• Announces France’s initiative towards reworking on a new visa policy that will grant French Visa to Indians within two days.

• Announces quadrupling the budget for Chevening Scholarships in India, and creating over 100 new awards to strengthen the educational ties between the two countries.

• Prime Minister Shri Narendra Modi interacts with several Latin American leaders on sidelines of the BRICS Summit. • Prime Minister says that the ‘Preferential Trade Agreement’ between India and the MERCOSUR trade block, and Chile must be utilised more effectively. • Asks the Latin American leaders to encourage their business leaders to participate in an upcoming investment conclave in India.

Special Gesture • The President of Brazil Ms. Dilma Rousseff hosts Prime Minister Shri Narendra Modi in Brasilia on the sidelines of the Sixth BRICS Summit. • President Rousseff in a special gesture receives the Prime Minister of India with full military honours at the Presidential Palace. • Decision is taken on expanding investment and trade flows, besides propagating collaboration in the fields of defence, renewable energy and cyber security.

• Prime Minister Shri Narendra Modi has detailed talks with President Mr Donald Ramotar of Guyana and President Mr Desi Bouterse of Suriname on the margins of the BRICS Summit. • Shri Modi mentions how the population of Indian origin, in these South American countries – who had migrated centuries ago – continues to act as a strong bridge of friendship between India and the South American countries.

exceeding expectations • Prime Minister Shri Narendra Modi visits Japan – his first bilateral visit outside India’s immediate neighbourhood; underlines the high priority Japan receives in India’s foreign and economic policies. • Shri Modi states, “Japan is the land of the rising sun and India is the land of the shining sun.” • Shri Modi meets Japan’s Prime Minister Mr Shinzo Abe, and Emperor Akihito; elevates the relationship to ‘Special Strategic and Global Partnership’. • Economic ties receive a huge boost with the setting up of the India–Japan Investment Promotion Partnership, and Japan’s intention to realise 3.5 trillion Yen (Rs. 2,10,000 crore) of public and private investment and financing to India over the next five years.

• External Affairs Minister Smt. Sushma Swaraj travels to Vietnam; meets the top leadership. • Discusses India’s plan to ramp up its engagement with Vietnam in the oil sector and deepen defence ties. • Smt. Swaraj inaugurates the Third Round of India-ASEAN Think Tanks at Hanoi.

Bilateral Ties at Multilateral meetings • Smt. Sushma Swaraj visits Nay Pyi Taw, Myanmar for the India-ASEAN Foreign Ministers’ Meeting, EAS Foreign Ministers’ Meeting and ASEAN Regional Forum (ARF) Meeting. • Smt. Swaraj holds bilateral meetings with her counterparts from 11 countries, including Australia, Brunei Darussalam, Canada, China, Indonesia, Japan, Myanmar, New Zealand, South Korea, Thailand and Vietnam. • The EAS meeting focuses on cooperation in the areas of energy, education, disaster management, food security and improvement of connectivity; discussion on issues relating to peace and security in the region at the ARF conference. • Smt. Swaraj emphasises on the need for strong connectivity within ASEAN, and to look at a more ‘functional visa regime’ in the 10-member grouping. • Stresses on the importance of the ‘C’ of connectivity ‘to the five Ts’ that Prime Minister Shri Narendra Modi is pursuing — Tradition, Talent, Tourism, Trade and Technology — for the growth of ASEAN.

• Dr. Kutesa underlines the potential for developmental cooperation between India and Uganda in the fields of investment, ICT, hydropower and capacity-building.

• India invites all Arab League Members to participate in a media conclave.

• Groundwork begins for hosting the largest ever India-Africa Forum Summit towards the end of 2014.

• Smt. Swaraj underlines her government’s unflinching commitment to sustain and expand relations with the Arab World.

• The third meeting between India and the Regional Economic Communities (RECs) of Africa takes place in New Delhi. • Work on harmonisation of standards and rules, and creation of common markets, has an important bearing on the development of India’s trade and investment with African countries.

• All diplomatic channels, in the region and beyond, activated to facilitate the rescue and return of Indian nationals as the crisis deepens. • Government’s efforts lead to the release of the Indians, including 46 nurses caught in the conflict zone. • Efforts continue for the release of 40 Indians who remain in captivity.

• The government facilitates the evacuation of 1,000 Indian nationals, particularly students, in the wake of growing tension in eastern Ukraine. • Indian diplomats also help four Sri Lankan students and 16 Maldives nationals to move out of the east Ukrainian city of Lugansk.

citizen centric • The Ministry of External Affairs decides to set-up new Passport Seva Kendras in the North East of India, including Shillong, Imphal, Itanagar, Agartala, Kohima and Gangtok. • Increase in the annual indent for blank passport booklets for the year 2014–15 to 20 million; to create a strategic reserve of 10 million booklets to meet any future exigency. • Ministry of Overseas Indian Affairs introduces facility for online tracking of the status of return of mortal remains of Indians, who have died abroad; facilitates follow-up with Indian Missions abroad.

• The Foreign Secretary Smt. Sujatha Singh launches e-office in the Ministry, marking the first virtual office by an Indian ministry. The e-office is to be rolled out in a phased manner in the Ministry, and thereafter, in the Indian Missions/Posts abroad. • The e-office is part of the mission mode project under the e-governance plan, and is a move to make offices paperless and more efficient. • The e-office is aimed at increasing transparency at the workplace, making an office paperless, and lowering costs of office processes.

Hola-Namaste : Reaching Hispanic World • Launch of a web-portal in Spanish to engage with the Hispanic community.

Clean Office • Efforts continue to preserve &amp; archive important documents with the assistance of retired Ambassadors. • An out-of-the-box initiative was taken to clean up the surroundings and the environment. • All the officials were in office on a Saturday to contribute ‘shramdaan’ to weed out the unrequired papers, unusable and obsolete furniture, appliances/office equipment, etc. 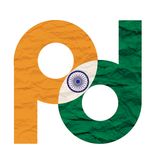