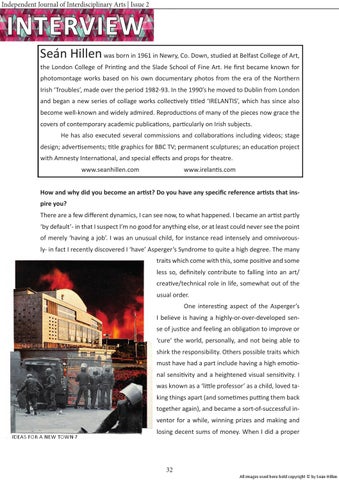 Seán Hillen was born in 1961 in Newry, Co. Down, studied at Belfast College of Art, the London College of Printing and the Slade School of Fine Art. He first became known for photomontage works based on his own documentary photos from the era of the Northern Irish ‘Troubles’, made over the period 1982-93. In the 1990’s he moved to Dublin from London and began a new series of collage works collectively titled ‘IRELANTIS’, which has since also become well-known and widely admired. Reproductions of many of the pieces now grace the covers of contemporary academic publications, particularly on Irish subjects.

He has also executed several commissions and collaborations including videos; stage

How and why did you become an artist? Do you have any specific reference artists that inspire you? There are a few different dynamics, I can see now, to what happened. I became an artist partly ‘by default’- in that I suspect I’m no good for anything else, or at least could never see the point of merely ‘having a job’. I was an unusual child, for instance read intensely and omnivorously- in fact I recently discovered I ‘have’ Asperger’s Syndrome to quite a high degree. The many traits which come with this, some positive and some less so, definitely contribute to falling into an art/ creative/technical role in life, somewhat out of the usual order.

One interesting aspect of the Asperger’s

I believe is having a highly-or-over-developed sense of justice and feeling an obligation to improve or ‘cure’ the world, personally, and not being able to shirk the responsibility. Others possible traits which must have had a part include having a high emotional sensitivity and a heightened visual sensitivity. I was known as a ‘little professor’ as a child, loved taking things apart (and sometimes putting them back together again), and became a sort-of-successful inventor for a while, winning prizes and making and IDEAS FOR A NEW TOWN 7

losing decent sums of money. When I did a proper 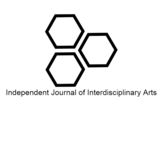