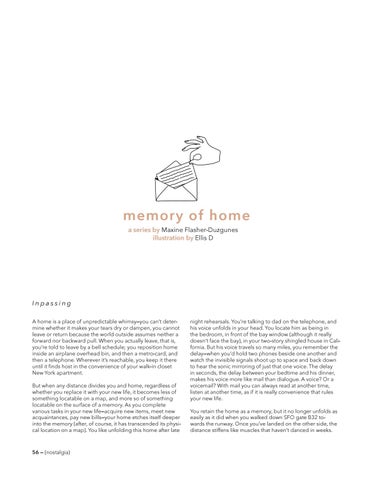 Inpassing A home is a place of unpredictable whimsy—you can’t determine whether it makes your tears dry or dampen, you cannot leave or return because the world outside assumes neither a forward nor backward pull. When you actually leave, that is, you’re told to leave by a bell schedule; you reposition home inside an airplane overhead bin, and then a metro-card, and then a telephone. Wherever it’s reachable, you keep it there until it finds host in the convenience of your walk-in closet New York apartment. But when any distance divides you and home, regardless of whether you replace it with your new life, it becomes less of something locatable on a map, and more so of something locatable on the surface of a memory. As you complete various tasks in your new life—acquire new items, meet new acquaintances, pay new bills—your home etches itself deeper into the memory (after, of course, it has transcended its physical location on a map). You like unfolding this home after late

night rehearsals. You’re talking to dad on the telephone, and his voice unfolds in your head. You locate him as being in the bedroom, in front of the bay window (although it really doesn’t face the bay), in your two-story shingled house in California. But his voice travels so many miles, you remember the delay—when you’d hold two phones beside one another and watch the invisible signals shoot up to space and back down to hear the sonic mirroring of just that one voice. The delay in seconds, the delay between your bedtime and his dinner, makes his voice more like mail than dialogue. A voice? Or a voicemail? With mail you can always read at another time, listen at another time, as if it is really convenience that rules your new life. You retain the home as a memory, but it no longer unfolds as easily as it did when you walked down SFO gate B32 towards the runway. Once you’ve landed on the other side, the distance stiffens like muscles that haven’t danced in weeks.

What’s fascinating is how when we recall a memory, we change it slightly, so each time we think of it again it is slightly different than the last. Nostalgia creates a space to grapple with our pasts in a seemingly safe way, but what are we really constantly nostalgic about? // Featuring María Bernad, Tak Kamihagi, Liv and Dome Cave-Sutherland, Bernice Mulenga, and more. 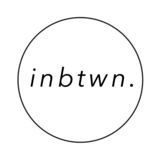