A humble SciArt view on Quantum Alphabets by Boo Kastner 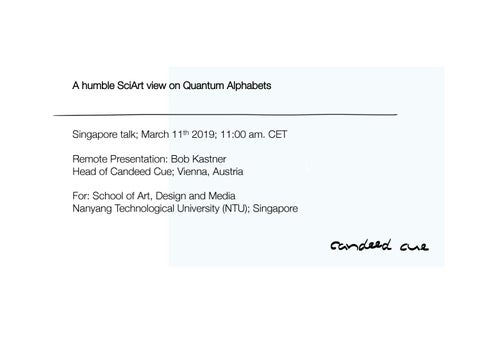 Quantum technology storyline Â Quantum technology shows promising business opportunities and is expected to become a global economic driver soon. Groundbreaking new applications will change daily life and shape our society. But quantum science is based on counterintuitive concepts and flies in the face of all human logic. Quantum realities can be expressed in mathematical equations but not fully translated into â&amp;#x20AC;&amp;#x153;understandableâ&amp;#x20AC;? language. Therefore scientists and artists develop creative formats to fully access the quantum universe and its revolutionary applications.

In the Newtonian world of classical physics we feel confortable when a bird is a bird, a dog is a dog and vegetables are healthy. In the quantum world Heisenberg described: “We are in the situation of sailors, who ended up in a far away country ... with a very strange language. The only option is to carefully feel how to find one´s way in the dark.”

New paradigms ask for new languages. Metaphors are central to human conceptual thinking and communication. Metaphors put the known into an equation with the unknown - Kepler´s cosmic rotations with Rutherford´s and Bohr´s atom as a microscopic planet.

In the scientistÂ´s laboratory Niels Bohr, Werner Heisenberg and others performed experiments and had to express their findings in abstract language - mathematical equations. Their dilemma: In the new quantum world the language of classical physics simply does not work to fully understand the contradictory quantum concepts.

In the artist´s studio In the quantum universe a particle could be a wave and vice versa - time and space could merge into space-time. Pablo Picasso: “A green parrot is also a green salad and a green parrot. Who only sees the parrot reduces his reality.” Picasso realized, that the geometry offers a new visual language to express the fourth dimension. He shows in two perspectives simultaneously full face and profile.

In the artist´s studio Picasso worked like a technologist. He performed experiments in cubism with objects beyond our perceptions. In an intensive experimental work period he extracted the essence of Minotaur.

In the artist´s studio

Artists utilize all human senses to interpret the unseen, the complex, the unimaginable, the counterintuitive and contradictions of our human logic. With one major concept at hand artists create an “alphabet” of verbal, visual, olfactory, haptic and sonic metaphors as a communicating language.

In the artist´s studio

Artists interpret the unseen, the complex, the unimaginable, the counterintuitive.

The Science- Art Equation The scientific process is not only a simple collection of single observations like taking photos with a camera. In addition to hard evidence, facts and reproducible results scientists form hypothesis with intuition. Art plays an important role to restructure thinking en route to a paradigm change. Artists cannot be relegated to subjectivity and imagination. Ludwig Wittgenstein (1922): „The limits of my language are the limits of my mind.“ Artists and scientists expand the limits of classical physics languages and coin new concepts. Both go beyond limitations of human traditional logic.

Following the Science- Art Equation The exercise: To meet in laboratories and art studios to exchange essential common talents: Logic reasoning, intuition, curiosity and social responsibility. The message: There is no reason for artists playing in the periphery or in the backyard. Artists as well as scientists are playing center court. The final “picture” for artists as well as scientists offered by Alice Major the Canadian poet: “Writing a poem is like picking a lock, poking a thin metal strip into a keyhole and maneuvering it, listening intently for the clicks that tell you, that you are in.”&quot;

A humble SciArt view on Quantum Alphabets by Boo Kastner 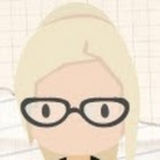