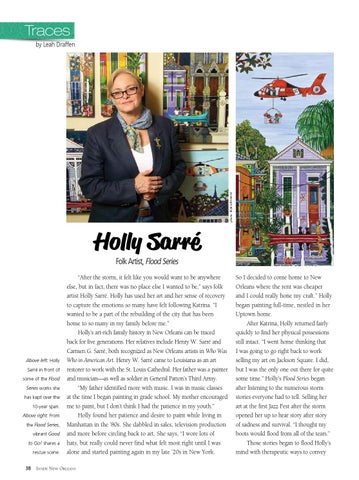 Above left: Holly Sarré in front of some of the Flood Series works she has kept over the 10-year span. Above right: From the Flood Series, vibrant Good to Go! shares a rescue scene. 38

“After the storm, it felt like you would want to be anywhere else, but in fact, there was no place else I wanted to be,” says folk artist Holly Sarré. Holly has used her art and her sense of recovery to capture the emotions so many have felt following Katrina. “I wanted to be a part of the rebuilding of the city that has been home to so many in my family before me.” Holly’s art-rich family history in New Orleans can be traced back for five generations. Her relatives include Henry W. Sarré and Carmen G. Sarré, both recognized as New Orleans artists in Who Was Who in American Art. Henry W. Sarré came to Louisiana as an art restorer to work with the St. Louis Cathedral. Her father was a painter and musician—as well as soldier in General Patton’s Third Army. “My father identified more with music. I was in music classes at the time I began painting in grade school. My mother encouraged me to paint, but I don’t think I had the patience in my youth.” Holly found her patience and desire to paint while living in Manhattan in the ’80s. She dabbled in sales, television production and more before circling back to art. She says, “I wore lots of hats, but really could never find what felt most right until I was alone and started painting again in my late ’20s in New York.

So I decided to come home to New Orleans where the rent was cheaper and I could really hone my craft.” Holly began painting full-time, nestled in her Uptown home. After Katrina, Holly returned fairly quickly to find her physical possessions still intact. “I went home thinking that I was going to go right back to work selling my art on Jackson Square. I did, but I was the only one out there for quite some time.” Holly’s Flood Series began after listening to the numerous storm stories everyone had to tell. Selling her art at the first Jazz Fest after the storm opened her up to hear story after story of sadness and survival. “I thought my boots would flood from all of the tears.” Those stories began to flood Holly’s mind with therapeutic ways to convey 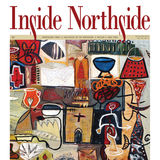