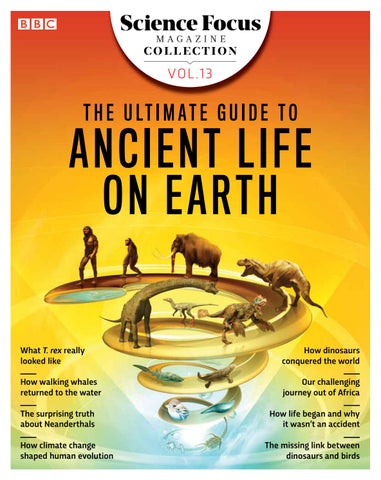 How dinosaurs conquered the world

How walking whales returned to the water

Our challenging journey out of Africa

How life began and why it wasnâ&#x20AC;&#x2122;t an accident The missing link between dinosaurs and birds

06 THE HISTORY OF LIFE And how fossils form

08 THE ORIGIN OF LIFE

The diferent theories of how it started

From sof bodies to hard shells to four legs

A journey through the Mesozoic era

The latest research reveals many surprises

How birds evolved from dinosaurs

62 DEATH OF THE DINOSAURS How their reign finally ended

How they evolved and why they survived

77 HOW EARTH MADE US

The forces that shaped our evolution

The secrets of the hominin family tree

How they met their demise

what is this? CRINOID FOSSILS Scyphocrinus elegans are an extinct species of crinoid dating from the Silurian/Devonian period, around 443-358 million years ago. Crinoids are marine echinoderms. These particular ones had stalks which they would have used to atach themselves to the seabed, capturing food with feathery arms that formed a cup. Thousands of extinct crinoid species have been found as fossils, but only a few hundred species still exist today.

ossilisation is so rare that fewer than one per cent of all the species that ever lived have ended up as fossils. Nevertheless, we have found so many in recent years that palaeontologists have pieced together many of the major evolutionary steps that were taken to arrive at the startling profusion of life we see today. Beginning with mere traces of microbes in 3.95-billion-year-old rocks from Canada, the ever-increasing complexity and diversity of life can be traced through the evolution of multicellularity and the first large animals, and then the sudden appearance of many invertebrate groups in the Cambrian Explosion 541 million years ago. Subsequent developments in vertebrates included backbones, jaws and limbs. The invasion of Earth’s landmasses by plants 470 million years ago and four-limbed tetrapods 395 million years ago, meant the journey to the modern world was well underway… 5

245 MYA DINOSAUR A NCESTORS Archosaurs (‘ruling reptiles’) evolved around 245 million years ago. They are the ancestors of dinosaurs and pterosaurs (fying reptiles) as well as modern-day crocodiles and birds. Desmatosuchus (below) was a herbivore with an armoured body that used its long spikes for self-defence.

243 MYA FIRST DINOSAUR The dog-sized Nyasasaurus (below) is either the oldest known dinosaur or the closest known relative to the earliest dinosaurs, preceding any other dinosaur by 12 million years.

Although only fossil fragments of Nyasasaurus (right) have been found, they show features unique to dinosaurs

PALAEONTOLOGISTS HAVE LEARNT MORE ABOUT DINOSAUR BEHAVIOUR FROM FOOTPRINTS THAN FOSSILS

EORAPTOR WAS ONE OF THE FIRST DINOSAURS. Its hands had five digits, but two of these were clawless stumps. Only juveniles have been found so far.

214 MYA PL ATEOSAURUS (lef) lived in herds. Graveyards, where more than 55 individuals are preserved together, show where they became stuck in the mud and starved to death.

201 MYA TRI ASSIC-JUR ASSIC Mass etinctio event Between 70 and 75 per cent of Earthâ&#x20AC;&#x2122;s species went extinct at the end of the Triassic, including many amphibians and large reptiles. The cause is unknown, but the empty niches allowed dinosaurs to proliferate in the Jurassic.

200 MYA FIRST M A MM A LS Dinosaurs began to dominate on land, but one group of mammal-like reptiles found their own successful niche. The tiny creatures tended to live in trees, and hunted at night when the dinosaurs were less active.

170-160 MYA HUAYA NGOSAURUS This armoured, herbivore had a ridge of spines along its back for self-defence. Fossils have been found in China.

Juramaia showed features that align with placental mammals. The researchers found that its paws and teeth were more similar to animals from this group, although they can’t say for sure that it didn’t have a pouch, because any pouch tissue would have degraded long ago. 2

Since teeth take so long to decompose, they are ofen the only things lef to go by, so it’s not uncommon for fossil discoveries to

be based on dentistry alone. In 2018, Brazilian palaeontologists found the first Brazilian mammal from the era of the dinosaurs – based on a single tooth – and named the new species Brasilestes stardusti in tribute to David Bowie’s character, Ziggy Stardust. The 80-million-year-old tooth belonged to 3

a large mammal from the class Theria that probably gave birth to live young rather than laying eggs. 4

Our own ancestors emerged from the sea 400 million years ago and never looked back, but somewhere along the mammal lineage,

TOP: Juramaia sinensis was the earliest known ancestor of placental mammals ABOVE: Ambulocetus was known as the ‘walking whale’ ABOVE CENTRE: Repenomamus feasted on dinosaurs RIGHT: An Indo-pacific botlenose dolphin (Tursiops aduncus) mother nursing her calf

When Chinese palaeontologists uncovered the earliest known mammal in Lianong Province in 2011, they named it Juramaia sinensis (‘Jurassic mother from China’). This small, furry, 160-million-yearold animal resembled a shrew and pre-dated what was previously the oldest mammal by 35 million years, meaning that mammals were more evolved than we thought during the age of the dinosaurs. The researchers were keen to find out what type of mammal it was. While marsupials like kangaroos and koalas nurse their babies in a pouch until they are able to survive outside, placental mammals give birth to more fully developed babies. (Today’s only other surviving branch of mammals – the monotremes – lay eggs, like platypuses.) The placental mammals are sometimes said to be more advanced. But even at this early stage in mammal evolution

things went the opposite way and the ancestors of whales headed back to the water. 49-millionyear-old Ambulocetus natans, discovered in 1992, embodies this transition – a mammal from the whale line that could walk and swim, it probably looked like a cross between a crocodile and an oter. 5

Reptiles’ jaws are made up of several bones. But in mammals, the jaw bones fused together early during our evolution to form one piece, the bones that didn’t got smaller and moved back to form part of our ears. This separation between our jaws and ears eventually made space in our skulls for bigger brains. These features can be recognised in the mouse-like cynodont Hadrocodium wui, which 6

lived around 195 million years ago, but probably evolved later in most other species. 6

The word mammal is derived from mammary glands. All mammals produce milk and use it to feed their young; even bats and dolphins breastfeed. It’s thought that ancestral animals had glands that were more like sweat glands (associated with hairs) but because there is no fossil evidence, it is hard to know for sure. Today’s platypuses have mammary ‘patches’ but no nipples, possibly resembling primitive mammary glands. 7

During the Triassic and Jurassic periods, the supercontinent Pangaea began to fragment into the modern continents we know today (see right). New oceans and mountains formed and habitats and climates became more varied. In what would become Asia, dense forests were home to gliding mammals the size of modern fying squirrels. At this time, trees were also perches for pterosaurs and feathered dinosaurs that would eventually evolve into birds.

CRETACEOUS 65 MILLION YEARS AGO Watch a clip about a fossil primate called ‘Ida’ that may be one of our earliest ancestors bbc.in/2SvmIEd by H AY L E Y B E N N E T T

Hayley is a science writer based in Bristol.

HOW WE MIGRATED H

umanity may have developed in the East African rift valley, but we didn’t remain in our cradle. Our ancestors dispersed across every continent of the planet (except for the frozen wastelands of Antarctica) to become the most widely-spread animal species on the planet. In January 2018, scientists confirmed that a jawbone fossil, which was discovered in Misliya cave at Mount Carmel, Israel, back in 2002, showed that Homo sapiens lived outside Africa around 185,000 years ago. This was 80,000 years earlier than previously thought. And yet, tools found in the cave date even further back, suggesting the first exodus of Homo sapiens could have been as early as 250,000 years ago. But these early migrations seem to have ended in dead-ends, as DNA evidence shows that modern-day humans living outside Africa only trace their ancestry to an exodus around 60,000 years ago.

EARLY HOMININ MIGRATION PATHS Most experts believe that the earliest hominins came from Africa. But it’s still up for debate exactly when they started migrating onto other continents. Fossil and other archaeological evidence suggest waves of hominin migration from around two million years ago. This map reveals some of the sites of fossil discoveries that helped us piece together the homonin journey. The arrows show the possible routes that hominins may have followed, but these are still debated.

ICE AGE INFLUENCE Our migrating ancestors moved out through t he Arabia n peninsula a nd into t he huge sprawling landmass of Eurasia. The world back then was a very different place – Earth was in the freezing grips of an ice age. At its peak, immense ice sheets up to 4 kilometres thick extended from the north to smother northern Europe and America, as well as Siberia. Great glaciers also spread down from mountain ranges such as the Alps, Andes and Himalayas, as well as the rugged backbone of New Zealand. As well as being punishingly cold close to the ice sheets, reduced evaporation from the frigid seas also made the world much drier, with howling winds driving fierce dust storms across great arid plains. Just as t he cosmic periodicities of t he Milankovitch cycles cause fluctuating aridity in equatorial East Africa, the same cycles drive rhythms in the global climate, and in 5

Fossils dating back to between 1.2 million and 800,000 years ago have been discovered at two sites. They are either Homo antecessor or a branch of Homo ergaster.

No fossils have been discovered but footprints, possibly made by Homo antecessor, suggest it may have been the first hominin to reach Britain.

A jawbone fossil suggests Homo sapiens lived outside Africa around 185,000 years ago, yet tools that have been found could push that date back further.

Fossils and artefacts were found dating back to 1.7 million years ago. Scientists are debating whether the fossils are of Homo erectus or a new species Homo georgicus.

A Homo erectus skullcap, discovered in 1937, was found to be very similar to another fossil found on Java at a site just three hours’ drive away in Trinil.

Another Homo erectus skullcap was discovered at this site. Its age has been hotly contested – estimated to be somewhere between 1.7 and 1 million years old.

This BBC Science Focus Special Edition reveals the story of how ancient life developed on Earth from the very first lifeforms through to the evolution of humans... IN THIS ISSUEÉ Why life on Earth wasn’t an accident What T. rex really looked like Piecing together our hominin family tree How walking whales returned to the water The surprising truth about Neanderthals Missing links: dino-birds and dino-bats

† UK calls will cost the same as other standard fixed line numbers (starting 01 or 02) and are included as part of any inclusive or free minutes allowances (if offered by your phone tariff). Outside of free call packages, call charges from mobile phones will cost between 3p and 55p per minute. Lines are open Mon to Fri 8am – 6pm and Sat 9am – 1pm. *Subscribers to BBC Science Focus Magazine receive FREE UK POSTAGE on this special edition. Prices including postage are: £11.49 for all other UK residents, £12.99 for Europe and £13.49 for Rest of World. All orders subject to availability. Please allow up to 21 days for delivery.

The Ultimate Guide to Ancient Life

This BBC Science Focus Special Edition reveals the story of how ancient life developed on Earth from the very first lifeforms through to the...

The Ultimate Guide to Ancient Life

This BBC Science Focus Special Edition reveals the story of how ancient life developed on Earth from the very first lifeforms through to the...