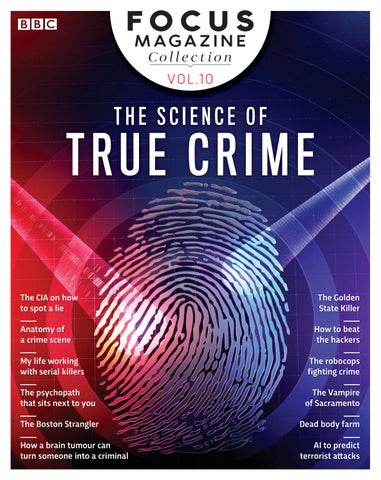 The Golden State Killer How to beat the hackers

My life working with serial killers

The psychopath that sits next to you

The Vampire of Sacramento

How a brain tumour can turn someone into a criminal

How DNA is creating photofits

32 The psychopaths among us

Who around you fits the profile?

Take the test to see if your boss is a psycho

Tips from a former CIA oficer

How brain injuries can create criminals

How MRI scanners can spot liers

68 How to beat hackers

The new techniques to foil malware

How to prevent atacks before they happen

The new police force taking to the streets

90 The future of fighting crime

The forensic psychologist on serial killers

FORENSIC SCIENCE Scene-of-crime operatives in plastic overalls are a common sight on our TV screens. But what do they actually do? WORDS: TOM IRELAND

HAT IS FORENSIC SCIENCE? Any scientific process used as part of a criminal investigation is considered forensic science. This spans both the grim, grisly procedures of the autopsy room and the cutting-edge analysis of a crime scene. But it also encompasses the less glamorous, painstaking lab work of DNA profiling, fingerprint analysis and the uncovering of hidden digital files. There is even such a thing as forensic accountancy. WHAT TECHNIQUES ARE USED TO SOLVE CRIMES TODAY? The bulk of modern forensic work involves the analysis of DNA or fingerprints left at a crime scene. In murder cases, forensic autopsies help work out how a person died.

A range of more specialised and elaborate forensic techniques can be used to identify suspects in the most serious cases, such as tracking serial killers or terrorists. These methods include forensic ecology, where tiny traces of pollen or fungal spores can be used to tell where a suspect has been, or forensic entomology, where the presence of certain insects can help reveal how long a person has been dead. As people spend more and more time on devices like sma rtphones and computers, so-called â&#x20AC;&#x2DC;digital forensicsâ&#x20AC;&#x2122; is playing an evergreater role in criminal investigations, too. The growth in this field of forensic science also reflects the fact that there are now over four million CCTV cameras in the UK.

Corpses can tell you a lot. Just like language, decomposition is dependent on location. Which is why some researchers say we need to start studying the dialect of decay in the UK

r Anna Williams wants to watch you rot. It’s nothing personal; it’s for science, specifically the science of taphonomy, which is t he study of decay a nd fossilisation. By monitoring how corpses decompose, she hopes to increase our understanding of the subtleties of the process and improve the accuracy with which we can locate and identify dead people, and determine their time of death. In order to do this, Williams, a forensic anthropologist at the University of Huddersfield, wants to establish a human taphonomy facility in the UK. There are already nine such facilities – colloquially known as ‘body farms’ – around the world: seven in the US, one in Australia and another in the Netherlands. So why do we need one here? “What we know about decomposition has come out of the American facilities,” explains Williams. “Before the first one opened in 1981,

we really didn’t know very much about how bodies decompose in different conditions. The research that’s been going on since then has really boosted our knowledge. “And one of the things we’ve learned is that decomposition is incredibly dependent upon local conditions: the surrounding temperature, rainfall, humidity, soil type, ecology, insects, scavengers. So, the information coming out of the existing facilities is very useful, but it’s not directly applicable to forensic cases in the UK.” In short, people in the UK don’t decay in the same way as they do elsewhere. In fact, people don’t always decay the same way in the same country. And we wouldn’t know that if it wasn’t for the pioneering work of forensic anthropologist Dr William Bass. Bass founded the first human decomposition research facility at the University of Tennessee after recognising how misleading the decay process could be. The realisation came in 1977 after local police contacted Bass and asked

Each attack was random. But what if within lists of attacks there was a hidden pattern â&#x20AC;&#x201C; information lurking within the statistics?

TERRORISM? Mathematicians are fnding patterns in apparently random acts of terrorism that may provide clues as to how we can thwart such attacks before they take place

arcelona, 17 August: 13 dead. London, 19 June: one dead. London, 3 June: eight dead. Manchester, 22 May: 22 dead. Paris, 20 April: one dead. Stockholm, 7 April: four dead. London, 22 March: five dead. So goes the list of terror attacks and the number of lives claimed across the UK and Europe in 2017. Each attack was shocking, unpredicted and random. But what if within lists of attacks like this, the cold, hard data of terrorism, there was a hidden pattern – information lurking within the statistics? It’s a question that came to physicist Professor Neil Johnson at the University of Miami while he was visiting Bogota in Colombia in the 1990s. Since the mid-’60s, the country has been in the grip of a conflict between the government and a host of insurgent groups. “I’d turn on the news and three were killed today, then no one, then five, then two, then six,” says Johnson. “It’s a complicated set of numbers and I thought, let’s look at them – it’s typical for a physicist to want to do that.” His efforts to find a signal in that noisy data proved fruitful. Later, when he and economist Professor Mike Spagat at Royal Holloway, University of London, analysed a database of 20,000 attacks in Columbia

and plotted the number of attacks against the number of people killed in each of them, they found that rather than seeing a classic bell curve – the graph that describes most things in nature, from height to lifespans of individual species – what they saw was a steeply sloped graph that quickly levelled off, with a long ‘tail’. It reflected the fact that there had been a large number of attacks with a small number of casualties, and a small handful of attacks with a very high death toll. When they did the same with data that followed the 2003 invasion of Iraq, it showed exactly the same pattern. What they’d discovered was a ‘power law’, a mathematical relationship found in phenomena right across science – everything from how the molecules in materials behave when they’re heated, to the frequency of earthquakes and even the masses of stars (see ‘What is a power law?’, p78). The power law’s discover y in t he realm of terrorism has a chilling consequence. But it also raises the question whether these seemingly random acts might actually be predictable in some way. At the same time as Johnson was uncovering the power law relationship between the number of terror attacks and their scale, computer scientist

Criminal masterminds had beter watch out. Scientists are on their tail and have some clever new ways to catch them. Discover the advances that are revolutionising criminology and forensics WORDS: ANDY RIDGWAY ILLUSTRATIONS: VLADO KRIZAN

TRUE CRIME This BBC Focus Special Edition reveals the cuting-edge techniques being used to catch criminals... IN THIS ISSUE… Understand how forensic science works How psychological profiling changed the FBI The DNA detectives solving unsolved crimes How brain injuries can create criminals Take a test to see if you are a psychopath How maths can help predict terrorist atacks Robocops: the future of crime fighting

Discover crime hotspots around the world that will surprise you

Find out about the psychopaths that live and work among us

Learn about the body farms where scientists are studying corpses

and quote The Science of True Crime Print 1

The Science of True Crime

This BBC Focus Special Edition reveals the cutting-edge techniques being used to catch criminals... IN THIS ISSUE… Understand how forensic...

The Science of True Crime

This BBC Focus Special Edition reveals the cutting-edge techniques being used to catch criminals... IN THIS ISSUE… Understand how forensic...