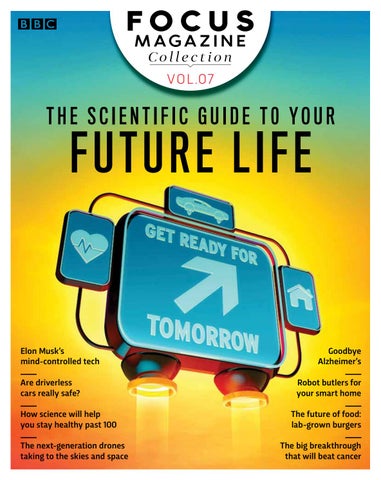 THE SCIENTIFIC GUIDE T0 YOUR

Elon Musk’s mind-controlled tech Are driverless cars really safe? How science will help you stay healthy past 100 The next-generation drones taking to the skies and space

Goodbye Alzheimer’s Robot butlers for your smart home The future of food: lab-grown burgers The big breakthrough that will beat cancer

The future of food

Secrets of the brain

How to stay healthy past 100

Fly into the future

The next giant leap

Are we on the brink of beating cancer?

The big tech trends of tomorrow

How smart cities will change our lives

Power tools to keep the lights on

More humans than ever before live in cities. Today, 54 per cent of us are urbanites. By 2050, that figure will rise to 66 per cent. And, by 2100, it will be 80 per cent. But all sorts of clever technologies are being introduced that will make city life stress-free, eficient and sustainable WORDS: JHENI OSMAN

Sensors on streetlights spot crashes and snarl-ups, alerting a central computer to coordinate trafic lights to keep you on the move.

Incredibly, up to 40 per cent of inner-city hold ups are caused by vehicles on the hunt for a parking space. Streetlightbased radars keep an eye on parking spots and relay availability in real-time to a smartphone app.

Public spaces harness ‘people power’ – the kinetic energy of pedestrians’ footsteps is captured by foor tiles that convert motion into electricity. Sport pitch foodlights could even be powered by the players running around.

Buildings are clad in photovoltaic glass, which acts like a solar panel while leting light through. The next step is coating roads and cycle paths in solar panels.

Instead of just marketing products, billboards also remove pollution from the air. In the presence of ultraviolet light from the Sun and water molecules from the air, titanium dioxide breaks down nitrogen oxides from car exhausts.

Humanoid robots patrol the streets, acting as an eye on the streets and providing a point of contact with police call centres. Robocops are already active on the streets of Dubai. Meanwhile, some cities are trialling sofware that recognises individuals by matching their clothes, skin and hair, helping to spot troublemakers.

Parked electric cars help charge electric trains at peak times and get free parking in return. An intelligent system knows your commuting hours and ensures your car is fully charged on your return.

Fed up of the stench of over-stufed rubbish bins? Well, some cities are trialling bins fited with sensors that alert the authorities when they are full.

Making use of the redundant space on top of many city buildings, spaces to land drones ensure deliveries are on time. The company Skyports has created 15 such spots on roofs across London.

Jheni Osman is a science writer, author and presenter of SciTech Voyager.

FOOD The never-ending deluge of information about our food choices can be bafing. What will we be eating in the future? Will we all become vegan? Or are there other alternatives so that we can have our steak and eat it?

iet ca n be a contentious issue, subject to the forces of personal ethics, religious beliefs and health concerns. In recent years, scientists and the public have become increasingly aware that the food we eat can have negative impacts on the planet. According to figures from the Consultative Group on International Agricultural Research (CGIAR), one-third of our greenhouse gas emissions come from agriculture. But that’s just one factor. Our food system is also the leading cause of deforestation, land use change and biodiversity loss in the world. Then there’s overfishing, pollution, groundwater depletion, excessive fertiliser use and pesticides to contend with as well. With all these issues to consider, a ‘sustainable’ diet might mean different things depending on who you talk to. However, certain trends cut through the noise – most notably, an emphasis on more plant-based diets. A paper published in 2016 in Proceedings Of The National Academy Of Sciences concluded that a mass switch to vegetarianism would bring down food-related greenhouse gas emissions

by a whopping 63 per cent, while even just sticking to global health guidelines regarding meat consumption would be enough to reduce emissions by 29 per cent. As for veganism, it does seem to be edging ahead in the planet-saving stakes. Many of the issues that arise from farming livestock for meat – methane emissions from animal digestion, pollution from farms, energy-intensive feeds – also apply to the dairy and egg industries. If widespread veganism was enacted, that 63 per cent reduction in emissions shoots up to 70 per cent. These seem like hard figures to ignore, and yet ignored they are by the vast majority of people. While plant-based diets have now been normalised, practising vegetarians and vegans are still relatively thin on the ground. It’s thought only 2 per cent of the UK population is vegetarian, and less than 1 per cent is vegan. But stop the press! Maybe cutting out animal products entirely, or even nearly entirely, isn’t necessarily the way to go. There have been studies published in reputable journals which suggest that vegetables may not be our sole

UNLOCKING THE SECRETS OF THE BRAIN FROM AUTISM AND SCHIZOPHRENIA TO ALZHEIMER’S, LAB-GROWN MINI-BRAINS COULD BE THE KEY TO SOLVING THE BIGGEST MYSTERIES ABOUT HUMAN DEVELOPMENT AND DISEASE WORDS: KAT ARNEY

tacks of petri dishes in a laboratory incubator, each one holding a blob of human brain might sound like the stuff of science fiction. But this is no flight of the imagination: these mini-brains, known as organoids, are being cultivated in labs all over the world, and researchers believe they could unlock some of the secrets of how our brains grow and what happens when they go wrong. “I don’t think that any of us set out to try and grow a brain in a dish,” says Madeline Lancaster, a neurobiologist at the MRC Laboratory of Molecular Biology in Cambridge. “If you’d asked me even just a few months before I started working on it, I’d have said it was completely nuts – but in my case, it was an accident!”

Lancaster’s accidental experiments with organoids started when she was a postdoctoral researcher working in Vienna, investigating how the brain develops in the womb. She started by growing brain stem cells in flat layers in a dish, but soon realised they lacked many of the key characteristics of nerve cells in a real brain. In search of a better method she tried a new technique for growing neural ‘rosettes’ – flat, flower-like circles of cells that were more realistic, albeit still two-dimensional. “When I put the cells in the culture dish, there was something wrong with the reagents that I was using,” she says. “Rather than forming these nice flat rosettes, mine were forming these weird, floating balls.”

AIRSHIP If you’ve heard of the Hindenburg disaster, you’ll probably question the advisability of firing up massive passenger balloons filled with flammable gas. But modern airships are filled with helium rather than hydrogen, and can fly for thousands of kilometres while burning less fuel than an aeroplane. The UK-built Airlander 10 is actually a hybrid, using helium to provide 60 per cent of its lift, while the rest is provided by its wing-like hull. The first airships have been given government grants to investigate whether they could replace long-haul freight trucks and cargo ships, but the company also has more ambitious plans for tourism.

Ready for your own Optionally Piloted Hovering Air Vehicle? New Zealand-based Martin Aircraft Company has your back. Okay, it’s the size of a small car and uses fans rather than jets, but it has a roll cage, parachute and can stay in the air for half an hour. Sadly, there’s still no firm on-sale date.

What’s bigger than a football pitch, can withstand bullets, and has been designed in the UK? The Airlander, that’s what…

Enjoy an astronaut’s view of Earth

SPACE BALLOON If you want to take a trip into space, your quickest bet might be to take a balloon. The company World View Enterprises wants to send tourists into the stratosphere, 32km above Earth, on hot air balloons. Technically passengers won’t reach ‘space’ (which is defined as 100km above sea level), but this altitude is high enough to witness the curvature of the Earth. The balloon is still in the testing stage, but tickets should be on sale soon-ish. A long nose and small wings, as seen in this artist’s impression, cut down on noise-inducing pressure waves

X-PLANE When Chuck Yeager broke the sound barrier in the Bell X-1 in 1947, a sonic boom rang out that battered the eardrums of anyone underneath the plane’s 20-second supersonic flight path. Now, NASA has just announced funding for its latest X-plane, a commercial jet capable of flying at those same supersonic speeds (faster than the speed of sound), without disturbing the peace below. NASA has awarded Lockheed Martin a $247.5m (£183m approx) contract to build

a working example of a prototype it’s been working on for a few years: the Low Boom Flight Demonstrator. Concorde was the first commercial supersonic jet, but it was soon banned from flying supersonic over land because of the defeaning noise. Lockheed Martin says the X-plane shockwaves should sound no worse than a car door closing. NASA plans to start flying the plane by 2022, with testing over highly populated areas completed by 2025.

Listen to episodes of FutureProofing bbc.in/2ydz2LX

THE SCIENTIFIC GUIDE T0 YOUR

FUTURE LIFE From smartphones to smart homes, technology and scientific breakthroughs are revolutionising our lives. In this new BBC Focus Special Edition discover the big innovations that will change your world in the years to come. IN THIS ISSUE… Home: 3D printers, robot butlers Food: lab-grown burgers, dodo kebabs Health: beat cancer, live to 100-plus Travel: drones, driverless cars, jetpacks

Discover the smart cities of the future where sensors help you work, rest and play.

Find out about the mini-brains being grown to beat Alzheimer’s.

Find out whether driverless cars should be given the green light.

and quote Guide To Your Future Life Print 1

The Scientific Guide to Your Future Life

The Scientific Guide to Your Future Life