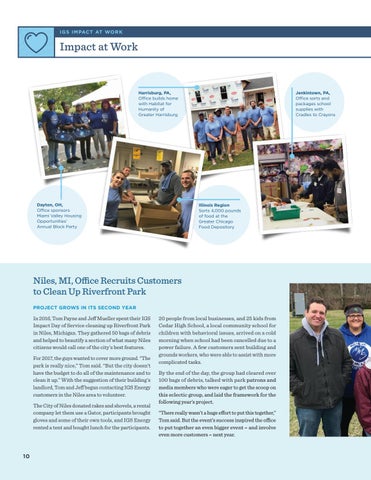 In 2016, Tom Payne and Jeff Mueller spent their IGS Impact Day of Service cleaning up Riverfront Park in Niles, Michigan. They gathered 50 bags of debris and helped to beautify a section of what many Niles citizens would call one of the city’s best features. For 2017, the guys wanted to cover more ground. “The park is really nice,” Tom said. “But the city doesn’t have the budget to do all of the maintenance and to clean it up.” With the suggestion of their building’s landlord, Tom and Jeff began contacting IGS Energy customers in the Niles area to volunteer. The City of Niles donated rakes and shovels, a rental company let them use a Gator, participants brought gloves and some of their own tools, and IGS Energy rented a tent and bought lunch for the participants.

20 people from local businesses, and 25 kids from Cedar High School, a local community school for children with behavioral issues, arrived on a cold morning when school had been cancelled due to a power failure. A few customers sent building and grounds workers, who were able to assist with more complicated tasks. By the end of the day, the group had cleared over 100 bags of debris, talked with park patrons and media members who were eager to get the scoop on this eclectic group, and laid the framework for the following year’s project. “There really wasn’t a huge effort to put this together,” Tom said. But the event’s success inspired the office to put together an even bigger event – and involve even more customers – next year. 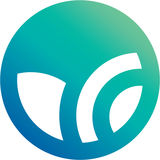