WHA68: Statement on Collaboration within the UN 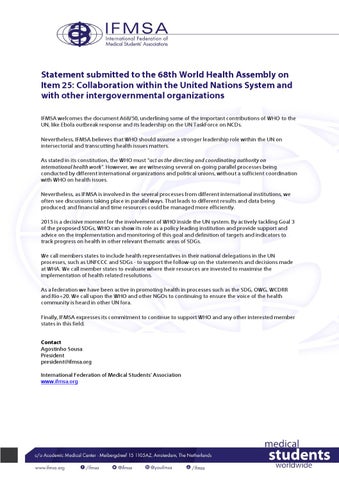 Statement submitted to the 68th World Health Assembly on Item 25: Collaboration within the United Nations System and with other intergovernmental organizations IFMSA welcomes the document A68/50, underlining some of the important contributions of WHO to the UN, like Ebola outbreak response and its leadership on the UN TaskForce on NCDs. Nevertheless, IFMSA believes that WHO should assume a stronger leadership role within the UN on intersectorial and transcutting health issues matters. As stated in its constitution, the WHO must â&amp;#x20AC;&amp;#x153;act as the directing and coordinating authority on international health workâ&amp;#x20AC;?. However, we are witnessing several on-going parallel processes being conducted by different international organizations and political unions, without a sufficient coordination with WHO on health issues. Nevertheless, as IFMSA is involved in the several processes from different international institutions, we often see discussions taking place in parallel ways. That leads to different results and data being produced; and financial and time resources could be managed more efficiently. 2015 is a decisive moment for the involvement of WHO inside the UN system. By actively tackling Goal 3 of the proposed SDGs, WHO can show its role as a policy leading institution and provide support and advice on the implementation and monitoring of this goal and definition of targets and indicators to track progress on health in other relevant thematic areas of SDGs. We call members states to include health representatives in their national delegations in the UN processes, such as UNFCCC and SDGs - to support the follow-up on the statements and decisions made at WHA. We call member states to evaluate where their resources are invested to maximise the implementation of health related resolutions. As a federation we have been active in promoting health in processes such as the SDG, OWG, WCDRR and Rio+20. We call upon the WHO and other NGOs to continuing to ensure the voice of the health community is heard in other UN fora. Finally, IFMSA expresses its commitment to continue to support WHO and any other interested member states in this field. Contact Agostinho Sousa President president@ifmsa.org International Federation of Medical Studentsâ&amp;#x20AC;&amp;#x2122; Association www.ifmsa.org

WHA68: Statement on Collaboration within the UN

Statement submitted by IFMSA to the WHA68 on Item 25: Collaboration within the United Nations Systems.