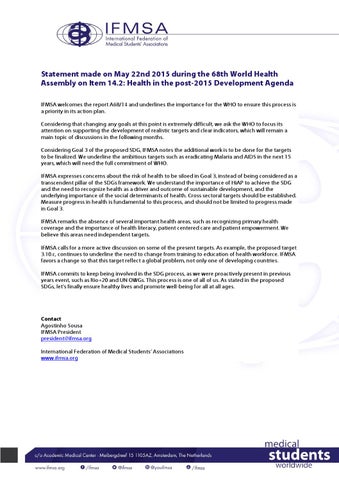 Statement made on May 22nd 2015 during the 68th World Health Assembly on Item 14.2: Health in the post-2015 Development Agenda IFMSA welcomes the report A68/14 and underlines the importance for the WHO to ensure this process is a priority in its action plan. Considering that changing any goals at this point is extremely difficult, we ask the WHO to focus its attention on supporting the development of realistic targets and clear indicators, which will remain a main topic of discussions in the following months. Considering Goal 3 of the proposed SDG, IFMSA notes the additional work is to be done for the targets to be finalized. We underline the ambitious targets such as eradicating Malaria and AIDS in the next 15 years, which will need the full commitment of WHO. IFMSA expresses concerns about the risk of health to be siloed in Goal 3, instead of being considered as a transcendent pillar of the SDGs framework. We understand the importance of HiAP to achieve the SDG and the need to recognize health as a driver and outcome of sustainable development, and the underlying importance of the social determinants of health. Cross sectoral targets should be established. Measure progress in health is fundamental to this process, and should not be limited to progress made in Goal 3. IFMSA remarks the absence of several important health areas, such as recognizing primary health coverage and the importance of health literacy, patient centered care and patient empowerment. We believe this areas need independent targets. IFMSA calls for a more active discussion on some of the present targets. As example, the proposed target 3.10.c, continues to underline the need to change from training to education of health workforce. IFMSA favors a change so that this target reflect a global problem, not only one of developing countries. IFMSA commits to keep being involved in the SDG process, as we were proactively present in previous years event, such as Rio+20 and UN OWGs. This process is one of all of us. As stated in the proposed SDGs, letâ&amp;#x20AC;&amp;#x2122;s finally ensure healthy lives and promote well-being for all at all ages.

Statement read on May 22nd during the 68th World Health Assembly on agenda item 14.2.