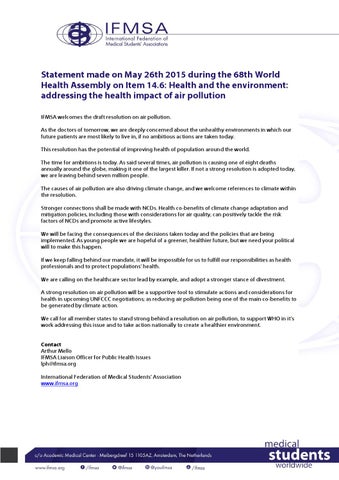 Statement made on May 26th 2015 during the 68th World Health Assembly on Item 14.6: Health and the environment: addressing the health impact of air pollution IFMSA welcomes the draft resolution on air pollution. As the doctors of tomorrow, we are deeply concerned about the unhealthy environments in which our future patients are most likely to live in, if no ambitious actions are taken today. This resolution has the potential of improving health of population around the world. The time for ambitions is today. As said several times, air pollution is causing one of eight deaths annually around the globe, making it one of the largest killer. If not a strong resolution is adopted today, we are leaving behind seven million people. The causes of air pollution are also driving climate change, and we welcome references to climate within the resolution. Stronger connections shall be made with NCDs. Health co-benefits of climate change adaptation and mitigation policies, including those with considerations for air quality, can positively tackle the risk factors of NCDs and promote active lifestyles. We will be facing the consequences of the decisions taken today and the policies that are being implemented. As young people we are hopeful of a greener, healthier future, but we need your political will to make this happen. If we keep falling behind our mandate, it will be impossible for us to fulfill our responsibilities as health professionals and to protect populationsâ&amp;#x20AC;&amp;#x2122; health. We are calling on the healthcare sector lead by example, and adopt a stronger stance of divestment. A strong resolution on air pollution will be a supportive tool to stimulate actions and considerations for health in upcoming UNFCCC negotiations; as reducing air pollution being one of the main co-benefits to be generated by climate action. We call for all member states to stand strong behind a resolution on air pollution, to support WHO in itâ&amp;#x20AC;&amp;#x2122;s work addressing this issue and to take action nationally to create a healthier environment. Contact Arthur Mello IFMSA Liaison Officer for Public Health Issues lph@ifmsa.org International Federation of Medical Studentsâ&amp;#x20AC;&amp;#x2122; Association www.ifmsa.org

Statement read by IFMSA on Item 14.6: Health and the environment, addressing the health impact of air pollution.