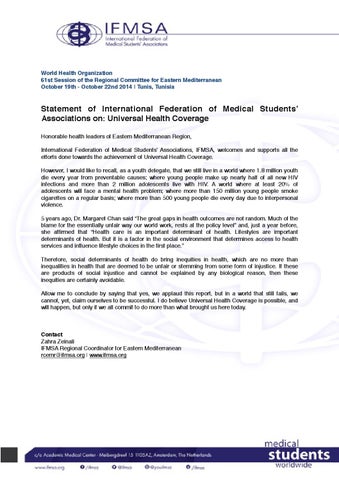 Statement of International Federation of Medical Students’ Associations on: Universal Health Coverage Honorable health leaders of Eastern Mediterranean Region, International Federation of Medical Students’ Associations, IFMSA, welcomes and supports all the efforts done towards the achievement of Universal Health Coverage. However, I would like to recall, as a youth delegate, that we still live in a world where 1.8 million youth die every year from preventable causes; where young people make up nearly half of all new HIV infections and more than 2 million adolescents live with HIV. A world where at least 20% of adolescents will face a mental health problem; where more than 150 million young people smoke cigarettes on a regular basis; where more than 500 young people die every day due to interpersonal violence. 5 years ago, Dr. Margaret Chan said “The great gaps in health outcomes are not random. Much of the blame for the essentially unfair way our world work, rests at the policy level” and, just a year before, she affirmed that “Health care is an important determinant of health. Lifestyles are important determinants of health. But it is a factor in the social environment that determines access to health services and influence lifestyle choices in the first place.” Therefore, social determinants of health do bring inequities in health, which are no more than inequalities in health that are deemed to be unfair or stemming from some form of injustice. If these are products of social injustice and cannot be explained by any biological reason, then these inequities are certainly avoidable. Allow me to conclude by saying that yes, we applaud this report, but in a world that still fails, we cannot, yet, claim ourselves to be successful. I do believe Universal Health Coverage is possible, and will happen, but only if we all commit to do more than what brought us here today.

Statement made by IFMSA during the WHO Eastern Mediterranean Regional Committee Session.