WHO EMRO 2014 - Statement on Climate Change and Air Pollution 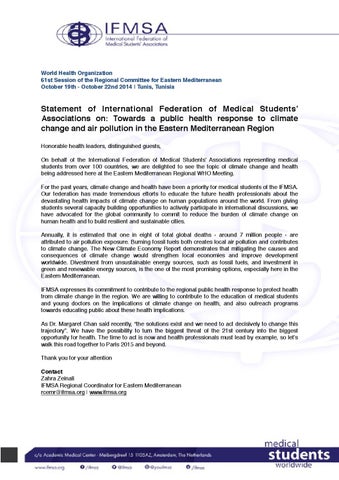 Statement of International Federation of Medical Students’ Associations on: Towards a public health response to climate change and air pollution in the Eastern Mediterranean Region Honorable health leaders, distinguished guests, On behalf of the International Federation of Medical Students’ Associations representing medical students from over 100 countries, we are delighted to see the topic of climate change and health being addressed here at the Eastern Mediterranean Regional WHO Meeting. For the past years, climate change and health have been a priority for medical students of the IFMSA. Our federation has made tremendous efforts to educate the future health professionals about the devastating health impacts of climate change on human populations around the world. From giving students several capacity building opportunities to actively participate in international discussions, we have advocated for the global community to commit to reduce the burden of climate change on human health and to build resilient and sustainable cities. Annually, it is estimated that one in eight of total global deaths - around 7 million people - are attributed to air pollution exposure. Burning fossil fuels both creates local air pollution and contributes to climate change. The New Climate Economy Report demonstrates that mitigating the causes and consequences of climate change would strengthen local economies and improve development worldwide. Divestment from unsustainable energy sources, such as fossil fuels, and investment in green and renewable energy sources, is the one of the most promising options, especially here in the Eastern Mediterranean. IFMSA expresses its commitment to contribute to the regional public health response to protect health from climate change in the region. We are willing to contribute to the education of medical students and young doctors on the implications of climate change on health, and also outreach programs towards educating public about these health implications. As Dr. Margaret Chan said recently, “the solutions exist and we need to act decisively to change this trajectory”. We have the possibility to turn the biggest threat of the 21st century into the biggest opportunity for health. The time to act is now and health professionals must lead by example, so let’s walk this road together to Paris 2015 and beyond. Thank you for your attention Contact  Zahra Zeinali  IFMSA Regional Coordinator for Eastern Mediterranean   rcemr@ifmsa.org | www.ifmsa.org

WHO EMRO 2014 - Statement on Climate Change and Air Pollution

Statement made by IFMSA during the WHO Eastern Mediterranean Regional Session.