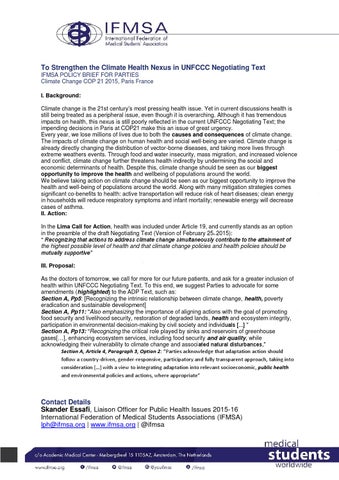 To Strengthen the Climate Health Nexus in UNFCCC Negotiating Text IFMSA POLICY BRIEF FOR PARTIES Climate Change COP 21 2015, Paris France I. Background: Climate change is the 21st century&#39;s most pressing health issue. Yet in current discussions health is still being treated as a peripheral issue, even though it is overarching. Although it has tremendous impacts on health, this nexus is still poorly reflected in the current UNFCCC Negotiating Text; the impending decisions in Paris at COP21 make this an issue of great urgency. Every year, we lose millions of lives due to both the causes and consequences of climate change. The impacts of climate change on human health and social well-being are varied. Climate change is already directly changing the distribution of vector-borne diseases, and taking more lives through extreme weathers events. Through food and water insecurity, mass migration, and increased violence and conflict, climate change further threatens health indirectly by undermining the social and economic determinants of health. Despite this, climate change should be seen as our biggest opportunity to improve the health and wellbeing of populations around the world. We believe taking action on climate change should be seen as our biggest opportunity to improve the health and well-being of populations around the world. Along with many mitigation strategies comes significant co-benefits to health: active transportation will reduce risk of heart diseases; clean energy in households will reduce respiratory symptoms and infant mortality; renewable energy will decrease cases of asthma. II. Action: In the Lima Call for Action, health was included under Article 19, and currently stands as an option in the preamble of the draft Negotiating Text (Version of February 25 2015): “ Recognizing that actions to address climate change simultaneously contribute to the attainment of the highest possible level of health and that climate change policies and health policies should be mutually supportive” th

III. Proposal: As the doctors of tomorrow, we call for more for our future patients, and ask for a greater inclusion of health within UNFCCC Negotiating Text. To this end, we suggest Parties to advocate for some amendments (highlighted) to the ADP Text, such as: Section A, Pp5: [Recognizing the intrinsic relationship between climate change, health, poverty eradication and sustainable development] Section A, Pp11: “Also emphasizing the importance of aligning actions with the goal of promoting food security and livelihood security, restoration of degraded lands, health and ecosystem integrity, participation in environmental decision-making by civil society and individuals [...] ” Section A, Pp13: “Recognizing the critical role played by sinks and reservoirs of greenhouse gases[…], enhancing ecosystem services, including food security and air quality, while acknowledging their vulnerability to climate change and associated natural disturbances,” Section A, Article 4, Paragraph 3, Option 2: “Parties acknowledge that adaptation action should follow a country-driven, gender-responsive, participatory and fully transparent approach, taking into consideration […] with a view to integrating adaptation into relevant socioeconomic, public health and environmental policies and actions, where appropriate”