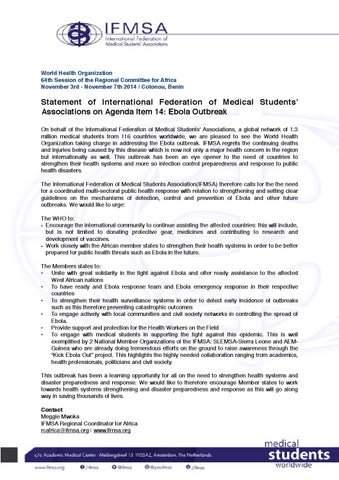 Statement of International Federation of Medical Students’ Associations on Agenda Item 14: Ebola Outbreak On behalf of the International Federation of Medical Students‘ Associations, a global network of 1.3 million medical students from 116 countries worldwide, we are pleased to see the World Health Organization taking charge in addressing the Ebola outbreak. IFMSA regrets the continuing deaths and injuries being caused by this disease which is now not only a major health concern in the region but internationally as well. This outbreak has been an eye opener to the need of countries to strengthen their health systems and more so infection control preparedness and response to public health disasters. The International Federation of Medical Students Association(IFMSA) therefore calls for the the need for a coordinated multi-sectoral public health response with relation to strengthening and setting clear guidelines on the mechanisms of detection, control and prevention of Ebola and other future outbreaks. We would like to urge: The WHO to: • Encourage the international community to continue assisting the affected countries: this will include, but is not limited to donating protective gear, medicines and contributing to research and development of vaccines. • Work closely with the African member states to strengthen their health systems in order to be better prepared for public health threats such as Ebola in the future. The Members states to: • Unite with great solidarity in the fight against Ebola and offer ready assistance to the affected West African nations • To have ready and Ebola response team and Ebola emergency response in their respective countries • To strengthen their health surveillance systems in order to detect early incidence of outbreaks such as this therefore preventing catastrophic outcomes • To engage actively with local communities and civil society networks in controlling the spread of Ebola. • Provide support and protection for the Health Workers on the Field • To engage with medical students in supporting the fight against this epidemic. This is well exemplified by 2 National Member Organizations of the IFMSA: SLEMSA-Sierra Leone and AEMGuinea who are already doing tremendous efforts on the ground to raise awareness through the “Kick Ebola Out” project. This highlights the highly needed collaboration ranging from academics, health professionals, politicians and civil society. This outbreak has been a learning opportunity for all on the need to strengthen health systems and disaster preparedness and response. We would like to therefore encourage Member states to work towards health systems strengthening and disaster preparedness and response as this will go along way in saving thousands of lives. Contact  Meggie Mwoka  IFMSA Regional Coordinator for Africa  rcafrica@ifmsa.org | www.ifmsa.org

WHO AFRO 2014 - Statement on Ebola Outbreak

Statement made by IFMSA during the WHO Africa Regional Committee Session.