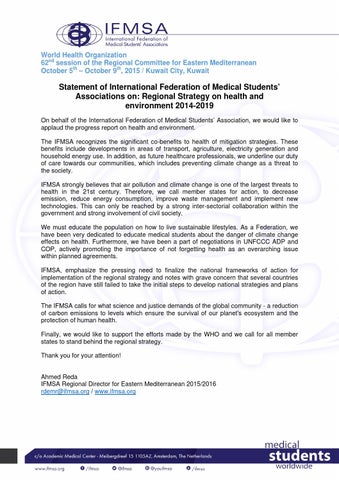 Statement of International Federation of Medical Studentsâ&amp;#x20AC;&amp;#x2122; Associations on: Regional Strategy on health and environment 2014-2019 On behalf of the International Federation of Medical Studentsâ&amp;#x20AC;&amp;#x2122; Association, we would like to applaud the progress report on health and environment. The IFMSA recognizes the significant co-benefits to health of mitigation strategies. These benefits include developments in areas of transport, agriculture, electricity generation and household energy use. In addition, as future healthcare professionals, we underline our duty of care towards our communities, which includes preventing climate change as a threat to the society. IFMSA strongly believes that air pollution and climate change is one of the largest threats to health in the 21st century. Therefore, we call member states for action, to decrease emission, reduce energy consumption, improve waste management and implement new technologies. This can only be reached by a strong inter-sectorial collaboration within the government and strong involvement of civil society. We must educate the population on how to live sustainable lifestyles. As a Federation, we have been very dedicated to educate medical students about the danger of climate change effects on health. Furthermore, we have been a part of negotiations in UNFCCC ADP and COP, actively promoting the importance of not forgetting health as an overarching issue within planned agreements. IFMSA, emphasize the pressing need to finalize the national frameworks of action for implementation of the regional strategy and notes with grave concern that several countries of the region have still failed to take the initial steps to develop national strategies and plans of action. The IFMSA calls for what science and justice demands of the global community - a reduction of carbon emissions to levels which ensure the survival of our planet&#39;s ecosystem and the protection of human health. Finally, we would like to support the efforts made by the WHO and we call for all member states to stand behind the regional strategy. Thank you for your attention! Ahmed Reda IFMSA Regional Director for Eastern Mediterranean 2015/2016 rdemr@ifmsa.org / www.ifmsa.org