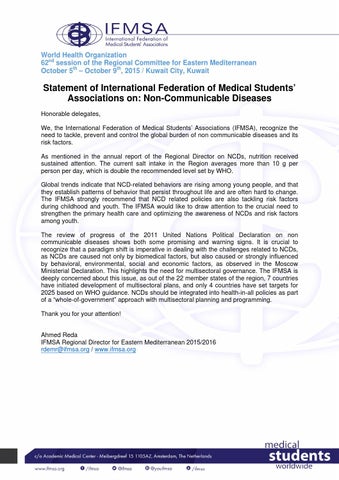 Statement of International Federation of Medical Students’ Associations on: Non-Communicable Diseases Honorable delegates, We, the International Federation of Medical Students’ Associations (IFMSA), recognize the need to tackle, prevent and control the global burden of non communicable diseases and its risk factors. As mentioned in the annual report of the Regional Director on NCDs, nutrition received sustained attention. The current salt intake in the Region averages more than 10 g per person per day, which is double the recommended level set by WHO. Global trends indicate that NCD-related behaviors are rising among young people, and that they establish patterns of behavior that persist throughout life and are often hard to change. The IFMSA strongly recommend that NCD related policies are also tackling risk factors during childhood and youth. The IFMSA would like to draw attention to the crucial need to strengthen the primary health care and optimizing the awareness of NCDs and risk factors among youth. The review of progress of the 2011 United Nations Political Declaration on non communicable diseases shows both some promising and warning signs. It is crucial to recognize that a paradigm shift is imperative in dealing with the challenges related to NCDs, as NCDs are caused not only by biomedical factors, but also caused or strongly influenced by behavioral, environmental, social and economic factors, as observed in the Moscow Ministerial Declaration. This highlights the need for multisectoral governance. The IFMSA is deeply concerned about this issue, as out of the 22 member states of the region, 7 countries have initiated development of multisectoral plans, and only 4 countries have set targets for 2025 based on WHO guidance. NCDs should be integrated into health-in-all policies as part of a “whole-of-government” approach with multisectoral planning and programming. Thank you for your attention! Ahmed Reda IFMSA Regional Director for Eastern Mediterranean 2015/2016 rdemr@ifmsa.org / www.ifmsa.org