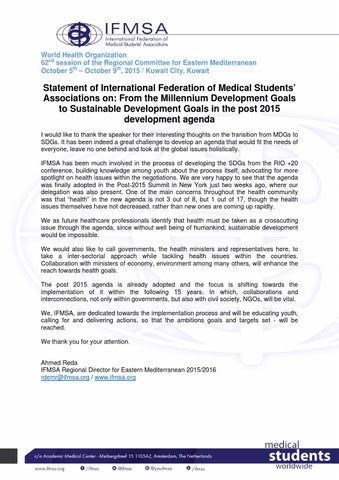 Statement of International Federation of Medical Students’ Associations on: From the Millennium Development Goals to Sustainable Development Goals in the post 2015 development agenda I would like to thank the speaker for their interesting thoughts on the transition from MDGs to SDGs. It has been indeed a great challenge to develop an agenda that would fit the needs of everyone, leave no one behind and look at the global issues holistically. IFMSA has been much involved in the process of developing the SDGs from the RIO +20 conference, building knowledge among youth about the process itself, advocating for more spotlight on health issues within the negotiations. We are very happy to see that the agenda was finally adopted in the Post-2015 Summit in New York just two weeks ago, where our delegation was also present. One of the main concerns throughout the health community was that “health” in the new agenda is not 3 out of 8, but 1 out of 17, though the health issues themselves have not decreased, rather than new ones are coming up rapidly. We as future healthcare professionals identify that health must be taken as a crosscutting issue through the agenda, since without well being of humankind, sustainable development would be impossible. We would also like to call governments, the health ministers and representatives here, to take a inter-sectorial approach while tackling health issues within the countries. Collaboration with ministers of economy, environment among many others, will enhance the reach towards health goals. The post 2015 agenda is already adopted and the focus is shifting towards the implementation of it within the following 15 years. In which, collaborations and interconnections, not only within governments, but also with civil society, NGOs, will be vital. We, IFMSA, are dedicated towards the implementation process and will be educating youth, calling for and delivering actions, so that the ambitions goals and targets set - will be reached. We thank you for your attention. Ahmed Reda IFMSA Regional Director for Eastern Mediterranean 2015/2016 rdemr@ifmsa.org / www.ifmsa.org