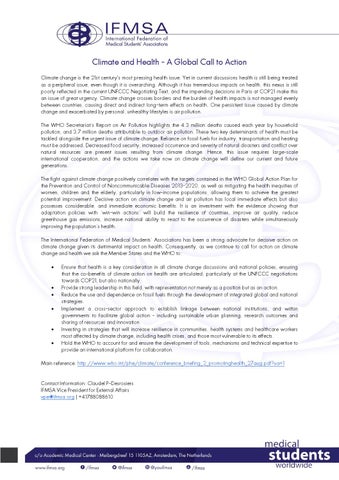 Climate and Health - A Global Call to Action Climate change is the 21st century&#39;s most pressing health issue. Yet in current discussions health is still being treated as a peripheral issue, even though it is overarching. Although it has tremendous impacts on health, this nexus is still poorly reflected in the current UNFCCC Negotiating Text, and the impending decisions in Paris at COP21 make this an issue of great urgency. Climate change crosses borders and the burden of health impacts is not managed evenly between countries, causing direct and indirect long-term effects on health. One persistent issue caused by climate change and exacerbated by personal, unhealthy lifestyles is air pollution. The WHO Secretariat’s Report on Air Pollution highlights the 4.3 million deaths caused each year by household pollution, and 3.7 million deaths attributable to outdoor air pollution. These two key determinants of health must be tackled alongside the urgent issue of climate change. Reliance on fossil fuels for industry, transportation and heating must be addressed. Decreased food security, increased occurrence and severity of natural disasters and conflict over natural resources are present issues resulting from climate change. Hence, this issue requires large-scale international cooperation, and the actions we take now on climate change will define our current and future generations. The fight against climate change positively correlates with the targets contained in the WHO Global Action Plan for the Prevention and Control of Noncommunicable Diseases 2013-2020, as well as mitigating the health inequities of women, children and the elderly, particularly in low-income populations, allowing them to achieve the greatest potential improvement. Decisive action on climate change and air pollution has local immediate effects but also possesses considerable, and immediate economic benefits. It is an investment with the evidence showing that adaptation policies with ‘win-win actions’ will build the resilience of countries, improve air quality, reduce greenhouse gas emissions, increase national ability to react to the occurrence of disasters while simultaneously improving the population’s health. The International Federation of Medical Students’ Associations has been a strong advocate for decisive action on climate change given its detrimental impact on health. Consequently, as we continue to call for action on climate change and health we ask the Member States and the WHO to:

Ensure that health is a key consideration in all climate change discussions and national policies, ensuring that the co-benefits of climate action on health are articulated, particularly at the UNFCCC negotiations towards COP21, but also nationally. Provide strong leadership in this field, with representation not merely as a position but as an action. Reduce the use and dependence on fossil fuels through the development of integrated global and national strategies. Implement a cross-sector approach to establish linkage between national institutions, and within governments to facilitate global action - including sustainable urban planning, research outcomes and sharing of resources and innovation. Investing in strategies that will increase resilience in communities, health systems and healthcare workers most affected by climate change, including health crises, and those most vulnerable to its effects. Hold the WHO to account for and ensure the development of tools, mechanisms and technical expertise to provide an international platform for collaboration.