WPRO - Healthy Ageing over the Life-Course 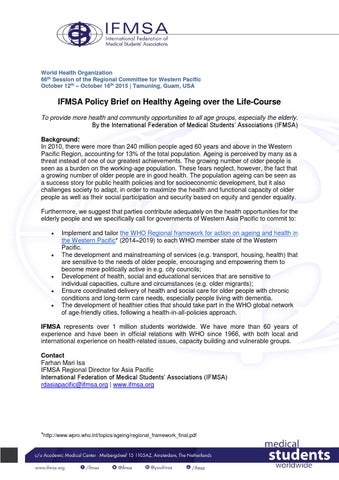 IFMSA Policy Brief on Healthy Ageing over the Life-Course To provide more health and community opportunities to all age groups, especially the elderly. By the International Federation of Medical Students’ Associations (IFMSA) Background: In 2010, there were more than 240 million people aged 60 years and above in the Western Pacific Region, accounting for 13% of the total population. Ageing is perceived by many as a threat instead of one of our greatest achievements. The growing number of older people is seen as a burden on the working-age population. These fears neglect, however, the fact that a growing number of older people are in good health. The population ageing can be seen as a success story for public health policies and for socioeconomic development, but it also challenges society to adapt, in order to maximize the health and functional capacity of older people as well as their social participation and security based on equity and gender equality. Furthermore, we suggest that parties contribute adequately on the health opportunities for the elderly people and we specifically call for governments of Western Asia Pacific to commit to: 

Implement and tailor the WHO Regional framework for action on ageing and health in the Western Pacific* (2014–2019) to each WHO member state of the Western Pacific. The development and mainstreaming of services (e.g. transport, housing, health) that are sensitive to the needs of older people, encouraging and empowering them to become more politically active in e.g. city councils; Development of health, social and educational services that are sensitive to individual capacities, culture and circumstances (e.g. older migrants); Ensure coordinated delivery of health and social care for older people with chronic conditions and long-term care needs, especially people living with dementia. The development of healthier cities that should take part in the WHO global network of age-friendly cities, following a health-in-all-policies approach.

IFMSA represents over 1 million students worldwide. We have more than 60 years of experience and have been in official relations with WHO since 1966, with both local and international experience on health-related issues, capacity building and vulnerable groups. Contact Farhan Mari Isa IFMSA Regional Director for Asia Pacific International Federation of Medical Students’ Associations (IFMSA) rdasiapacific@ifmsa.org | www.ifmsa.org

WPRO - Healthy Ageing over the Life-Course