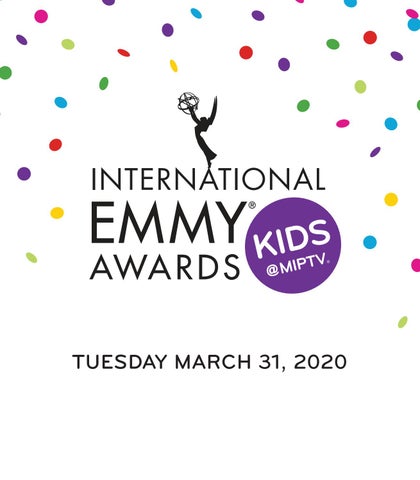 There are a lot of problems in the world right now- problems which led to the necessary if unfortunate cancellation of Miptv and our awards ceremony there. But children are still growing up and watching television and so the International Academy of Television Arts &amp; Sciences and Reed MIDEM are proud to be showcasing global excellence in children’s programming with the first ever virtual presentation of the International Emmy® Kids Awards.

This year 28 nominated programs from 16 different countries competed in the categories of Kids: Pre-School; Kids: Animation; Kids: Digital; Kids: Factual; Kids: Non-Scripted Entertainment; Kids: Series and Kids: TV Movie/MiniSeries. We congratulate the Nominees for their outstanding achievements and for inspiring their peers in their countries and the global television community with their exceptional work. The Nominees are from Australia, Belgium, Brazil, Chile, China, Denmark, France, Germany, India, The Netherlands, Nigeria, Norway, Singapore, South Korea, Thailand and the United Kingdom. We would like to thank our 2020 Presenting Partners: TV Kids, E&amp;Y and Junior@MIPTV

ZOG MAGIC LIGHT PICTURES UNITED KINGDOM Zog is the story of a keen young dragon who wants to learn how to fly, roar, and breathe fire in his first years at Dragon School. He’s desperate to impress his teacher and win a golden star, but he’s accident prone and each year he has to be helped by a kind young girl who patches up his bumps and bruises. A half-hour family film based on the picture book written by Julia Donaldson and illustrated by Axel Scheffler. Producers: Michael Rose, Martin Pope Directors: Max Lang, Daniel Snaddon Writers: Max Lang, Suzanne Lang Principal Cast: Patsy Ferran, Sir Lenny Henry, Hugh Skinner, Tracey Ullman

DIGITAL LIK MEG (LIKE ME) NRK SUPER NORWAY Like Me is a web series that combines elements of social media, instant messages and live action drama to tell a realistic story about exclusion and bullying. This program is presented with daily posts, in real time on the same website. The story unfolds from two wildly different, but equally valid, perspectives. The viewers can put themselves in the shoes of both main characters and “take over” their cell phones. When one of them receive a message, the viewer reads it on their own phone... Executive Producers: Gisle Halvorsen, Cathrine Simonsen Producer: Tone Rekdal Sperre Director: Anne Wisløff Writer: Anne Wisløff Principal Cast: Jenny Evensen, Sana Omar, Andrea Lynne

MALHAÇÃO AO VIVO (YOUNG HEARTS LIVE) GLOBO BRAZIL At the end of each story on TV, an exclusive web show is aired live on all the series’ social media and digital platforms, marking the end of one story and the beginning of a new topic. The show brings together the actors from the series, and has the help of doctors, psychologists, educators and specialists who use the net to broaden and expand the debates about every topic presented on TV. Executive Producer: Natália Grimberg Producers: Juliana Castro Director: Natália Grimberg Writer: Patrícia Moretzsohn Principal Cast: Camila Morgado, Carmo Dalla Vecchia, Daniel Rangel, Alica Milagres, Rayssa Bratillieri, André Luiz Frambach, Pally Siqueira

FACTUAL MY LIFE: HIKE TO HAPPINESS NINE LIVES MEDIA UNITED KINGDOM My Life is a CBBC strand of documentary series following the highs and lows of children across the world, each with a unique story to tell. In this documentary we follow four young people on a week-long trek with the Wilderness Foundation charity. They are determined to learn how to manage their mental health and build their resilience by carrying out a range of outdoor activities and camp in the wild. Executive Producer: Cat Lewis Producer: Kerry Allison Director: Kerry Allison Principal Cast: Ellie, Harry, Henry, Michael

A DIVISION OF World Screen

NON-SCRIPTED ENTERTAINMENT NACHTRAVEN (NIGHTHAWKS) DE MENSEN / KETNET (VRT) BELGIUM In Nighthawks, no one is afraid of the dark, but everyone wants to turn on the lights. Six children get to spend the night playing games. A mysterious character, the Nighthawk, lifts them from their beds and takes them on an adventure they won’t forget. In a dark labyrinth of puzzles, the teams look for solutions with torches, backlights and lasers. Which team is faster? Which team is fearless? Only the winning team get to spend the rest of the night at the desolate location. They are the Nighthawks of the week. Executive Producers: Hans Lovenich, Gaël Van Hoeteghem Producer: Sophie Van Bael Director: Sander Brants Writer: Mariëlle Dazler Principal Cast: Dave Nauwelaerts

PRESCHOOL PETIT PAKAPAKA / PÁJARO / SEÑAL COLOMBIA / NONSTOP CHILE Petit is a 5 year old kid who interprets everything in his own way. In each episode Petit will face a facet of the everyday world that will lead him to imaginative and unexpected conclusions, resolving conflicts in unexpected ways. Misunderstandings, questions and ideas that build his unusual world; what will Petit do this time? You never know! If I blow a lot of birthday candles will I grow many years at the same time? Will water leak into my brain if I put my head underwater?... Executive Producer: Bernardita Ojeda Producer: Daniela Ponce Director: Bernardita Ojeda Writer: Fernando Salem Principal Cast: Loló Muñoz, Agustina Cirulnik, Valeria Gómez,Luciana Falcón, Mara Campanelli, Pablo Gandolfo, Natalia Rosminati, Ariel Cister

SERIES JAMIE JOHNSON - SEASON 3 SHORT FORM FILM COMPANY UNITED KINGDOM Jamie Johnson is a family football drama about a boy who lives and breathes football. Combining drama and realistic sport, we follow Jamie’s highs and lows both on and off the pitch, as he follows his dream of being a professional footballer. Helped by cameos from some of the biggest names in football, Jamie learns that no matter your ability or the mistakes you make, what really counts is your love of the game. Executive Producer: Sam Talbot Producer: Anita Burgess Director: Julian Kemp, Joe Talbot Writer: Shaun Duggan Principal Cast: Louis Dunn, Lenna Gunning-Williams, Jonnie Kimmins, Patrick Ward

MALHAÇÃO: VIDAS BRASILEIRAS (YOUNG HEARTS) GLOBO BRAZIL The search for identity. The acceptance from others. The necessity of concealing behaviors and emotions and creating another reality to be accepted in the society. These are some common characteristics of the young-people generation craving for being everything at the same time and that absorbs a flood of information each minute. Executive Producer: Natalia Grimberg Producers: Fabiana Moreno, Simone Lamosa Director: Natalia Grimberg Writers: Patrícia Moretzsohn, Daniel Ortiz Principal Cast: Camila Morgado, Carmo Dalla Vecchia, Daniel Rangel, Alice Milagres, Rayssa Barillieri, André Luiz Frambach, Pally Siqueira

TV MOVIE / MINI-SERIES JOE ALL ALONE ZODIAK KIDS / CBBC UNITED KINGDOM Set on a south London council estate, Joe All Alone tells the story of 13 year old Joe, who is left all alone, when his mum and step dad announce they are going on holiday for a week - without him. And he mustn’t tell anyone. He doesn’t, because he’s scared of his stepdad. With only a few pounds to live on, Joe soon runs out of food and electricity... Executive Producers: Steven Andrew, Amy Buscombe Producer: Nadine Marsh-Edwards Director: Beryl Richards Writer: Guy Burt, Joanna Nadin Principal Cast: Daniel Frogson, Liani Samuel, Joe Sims, Kellie Shirley, Vas Blackwood, Erin Shanagher

INTERESTED IN BECOMING AN INTERNATIONAL EMMY® KIDS AWARDS JUROR? Contact us at awardsdept@iemmys.tv to find out more

Take a bow for adding a bit of spice to the everyday. Culture nurtures the spirit and the community. At EY we believe the arts are not an afterthought. They are the foundation for a richer life. EY is proud to tabulate the votes for the International Academy of Television Arts &amp; Sciences and we congratulate tonightâ&amp;#x20AC;&amp;#x2122;s nominees for The International EmmyÂŽ Kids Awards. Visit ey.com

AWA R D S SPECIAL THANKS TO OUR PARTNERS 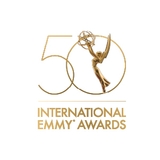