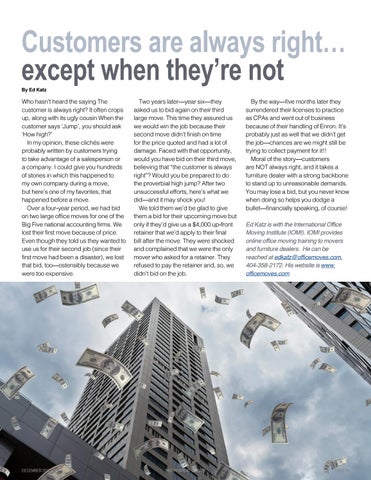 Who hasn’t heard the saying The customer is always right? It often crops up, along with its ugly cousin When the customer says ‘Jump’, you should ask ‘How high?’ In my opinion, these clichés were probably written by customers trying to take advantage of a salesperson or a company. I could give you hundreds of stories in which this happened to my own company during a move, but here’s one of my favorites, that happened before a move. Over a four-year period, we had bid on two large office moves for one of the Big Five national accounting firms. We lost their first move because of price. Even though they told us they wanted to use us for their second job (since their first move had been a disaster), we lost that bid, too—ostensibly because we were too expensive.

Two years later—year six—they asked us to bid again on their third large move. This time they assured us we would win the job because their second move didn’t finish on time for the price quoted and had a lot of damage. Faced with that opportunity, would you have bid on their third move, believing that “the customer is always right”? Would you be prepared to do the proverbial high jump? After two unsuccessful efforts, here’s what we did—and it may shock you! We told them we’d be glad to give them a bid for their upcoming move but only if they’d give us a $4,000 up-front retainer that we’d apply to their final bill after the move. They were shocked and complained that we were the only mover who asked for a retainer. They refused to pay the retainer and, so, we didn’t bid on the job.

By the way—five months later they surrendered their licenses to practice as CPAs and went out of business because of their handling of Enron. It’s probably just as well that we didn’t get the job—chances are we might still be trying to collect payment for it!! Moral of the story—customers are NOT always right, and it takes a furniture dealer with a strong backbone to stand up to unreasonable demands. You may lose a bid, but you never know when doing so helps you dodge a bullet—financially speaking, of course! Ed Katz is with the International Office Moving Institute (IOMI). IOMI provides online office moving training to movers and furniture dealers. He can be reached at edkatz@officemoves.com, 404-358-2172. His website is www. officemoves.com 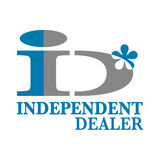