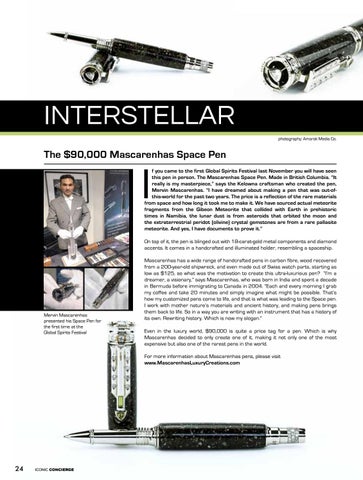 f you came to the first Global Spirits Festival last November you will have seen this pen in person. The Mascarenhas Space Pen. Made in British Columbia. “It really is my masterpiece,” says the Kelowna craftsman who created the pen, Mervin Mascarenhas. “I have dreamed about making a pen that was out-ofthis-world for the past two years. The price is a reflection of the rare materials from space and how long it took me to make it. We have sourced actual meteorite fragments from the Gibeon Meteorite that collided with Earth in prehistoric times in Namibia, the lunar dust is from asteroids that orbited the moon and the extraterrestrial peridot (olivine) crystal gemstones are from a rare pallasite meteorite. And yes, I have documents to prove it.” On top of it, the pen is blinged out with 18-carat-gold metal components and diamond accents. It comes in a handcrafted and illuminated holder, resembling a spaceship.

Mascarenhas has a wide range of handcrafted pens in carbon fibre, wood recovered from a 200-year-old shipwreck, and even made out of Swiss watch parts, starting as low as $125, so what was the motivation to create this ultra-luxurious pen? “I’m a dreamer, a visionary,” says Mascarenhas, who was born in India and spent a decade in Bermuda before immigrating to Canada in 2004. “Each and every morning I grab my coffee and take 20 minutes and simply imagine what might be possible. That’s how my customized pens come to life, and that is what was leading to the Space pen. I work with mother nature’s materials and ancient history, and making pens brings them back to life. So in a way you are writing with an instrument that has a history of its own. Rewriting history. Which is now my slogan.” Even in the luxury world, $90,000 is quite a price tag for a pen. Which is why Mascarenhas decided to only create one of it, making it not only one of the most expensive but also one of the rarest pens in the world. For more information about Mascarenhas pens, please visit www.MascarenhasLuxuryCreations.com

The Luxury Lifestyle Magazine for the Affluent Gentleman ... Motoring | Watches & Jewellery | Electronics & Gadgets | Yachts & Boats | Style & Fashion | People & Interviews | Travel ... and more! The definitive magazine helping to define affluence with high-end living, Iconic Concierge provides an amazing and unrivaled interaction and exposure with the over-the-top lifestyle in Vancouver. Filled with the best in luxury cars, travel, watches, private jets, yachts, fine dining, fashion and, of course, profiles of the city’s who’s who, Iconic Concierge is the must-read resource for those who live or aspire to live the life of a luxurista. This edition: On the cover: Sevan Agopian of LUGARO | Shanghai - The City on the Sea | The McLaren Senna | The Journey to the Center of the Earth | Perfect Pairings - Chocolates & Spirits |New Luxury Watches |New Luxury SUVs: Lamborghini Urus; BMW X5; Rolls-Royce Cullinan; Mercedes G-Class | Jewellery Special ... and more!