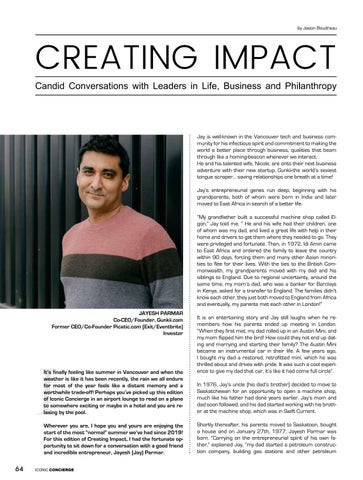 Jay is well-known in the Vancouver tech and business community for his infectious spirit and commitment to making the world a better place through business, qualities that beam through like a homing-beacon whenever we interact. He and his talented wife, Nicole, are onto their next business adventure with their new startup, Gunkii-the world’s sexiest tongue scraper… saving relationships one breath at a time! Jay’s entrepreneurial genes run deep, beginning with his grandparents, both of whom were born in India and later moved to East Africa in search of a better life. “My grandfather built a successful machine shop called Elgon,” Jay told me. “ He and his wife had their children, one of whom was my dad, and lived a great life with help in their home and drivers to get them where they needed to go. They were privileged and fortunate. Then, in 1972, Idi Amin came to East Africa and ordered the family to leave the country within 90 days, forcing them and many other Asian minorities to flee for their lives. With the ties to the British Commonwealth, my grandparents moved with my dad and his siblings to England. Due to regional uncertainty, around the same time, my mom’s dad, who was a banker for Barclays in Kenya, asked for a transfer to England. The families didn’t know each other, they just both moved to England from Africa and eventually, my parents met each other in London!” JAYESH PARMAR Co-CEO/Founder, Gunkii.com Former CEO/Co-Founder Picatic.com [Exit/Eventbrite] Investor

It’s finally feeling like summer in Vancouver and when the weather is like it has been recently, the rain we all endure for most of the year feels like a distant memory and a worthwhile trade-off! Perhaps you’ve picked up this edition of Iconic Concierge in an airport lounge to read on a plane to somewhere exciting or maybe in a hotel and you are relaxing by the pool. Wherever you are, I hope you and yours are enjoying the start of the most “normal” summer we’ve had since 2019! For this edition of Creating Impact, I had the fortunate opportunity to sit down for a conversation with a good friend and incredible entrepreneur, Jayesh (Jay) Parmar.

It is an entertaining story and Jay still laughs when he remembers how his parents ended up meeting in London. “When they first met, my dad rolled up in an Austin Mini, and my mom flipped him the bird! How could they not end up dating and marrying and starting their family? The Austin Mini became an instrumental car in their life. A few years ago, I bought my dad a restored, retrofitted mini, which he was thrilled about and drives with pride. It was such a cool experience to give my dad that car, it’s like it had come full circle”. In 1976, Jay’s uncle (his dad’s brother) decided to move to Saskatchewan for an opportunity to open a machine shop, much like his father had done years earlier. Jay’s mom and dad soon followed, and his dad started working with his brother at the machine shop, which was in Swift Current. Shortly thereafter, his parents moved to Saskatoon, bought a house and on January 27th, 1977, Jayesh Parmar was born. “Carrying on the entrepreneurial spirit of his own father,” explained Jay, “my dad started a petroleum construction company, building gas stations and other petroleum

The Luxury Lifestyle Magazine (not just) for the Affluent Gentleman ... Motoring | Watches & Jewellery | Electronics & Gadgets | Yachts & Boats | Style & Fashion | People & Interviews | Travel ... and more! The definitive magazine helping to define affluence with high-end living, Iconic Concierge provides an amazing and unrivalled interaction and exposure with the over-the-top lifestyle. Filled with the best in luxury cars, travel, watches, private jets, yachts, fine dining, fashion and, of course, profiles of the city’s who’s who, Iconic Concierge is the must-read resource for those who live or aspire to live the life of a luxurista. This edition: Acquafarina Vancouver - Modern Italian Cuisine | Invest in Paradise - The Riviera Nayavit | Publish Your Own Book | Big Watch Special | New Electric Vehicles | Record - The Most Expensive Car in the World | Summer Fashion - Be a Style Icon | Luxury Real Estate | OMEGA's Inspiring Women | The New Jet Set - An App for Flying Private ... and more