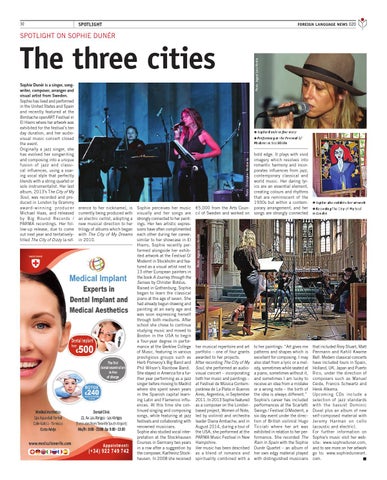 Performing at the Festival O/ Modernt in Stockholm

erence to her nickname), is currently being produced with an electric cellist, adopting a new musical direction to her trilogy of albums which began with The City of My Dreams in 2010.

Sophie perceives her music visually and her songs are strongly connected to her paintings. Her two artistic expressions have often complimented each other during her career; similar to her showcase in El Hierro, Sophie recently performed alongside her exhibited artwork at the Festival O/ Modernt in Stockholm and featured as a visual artist next to 13 other European painters in the book A Journey through the Senses by Christer Botéus. Raised in Gothenburg, Sophie began to learn the classical piano at the age of seven. She had already begun drawing and painting at an early age and was soon expressing herself through both mediums. After school she chose to continue studying music and moved to Boston in the USA to begin a four-year degree in performance at the Berklee College of Music, featuring in various prestigious groups such as Herb Pomeroy’s Big Band and Phil Wilson’s Rainbow Band. She stayed in America for a further year performing as a jazz singer before moving to Madrid where she spent seven years in the Spanish capital learning Latin and Flamenco influences. At this time she continued singing and composing songs, while featuring at jazz festivals and collaborating with renowned musicians. Sophie also studied vocal interpretation at the Stockhausen Courses in Germany two years in a row after a suggestion by the composer, Karlheinz Stockhausen. In 2008 she received

€5,000 from the Arts Council of Sweden and worked on

bold edge. It plays with vivid imagery which resolves into romantic harmony and incorporates influences from jazz, contemporary classical and world music. Her daring lyrics are an essential element, creating colours and rhythms that are reminiscent of the 1930s but within a contemporary arrangement, and her songs are strongly connected

Recording The City of My Soul in London

to her paintings: “Art gives me patterns and shapes which is excellent for composing. I may also start from a lyric or a melody, sometimes while seated at a piano, sometimes without it, and sometimes I am lucky to receive an idea from a mistake or a wrong note – the birth of the idea is always different.” Sophie’s career has included performances at the Scarlatti Swings / Festival O/Modernt, a six day event under the direction of British violinist Hugo Ticciati where her art was exhibited in relation to her performance. She recorded The Rain in Spain with the Sophie Dunér Quartet – an album of her own edgy material played with distinguished musicians

that included Rory Stuart, Matt Penmann and Kahlil Kwame Bell. Modern classical concerts have included tours in Spain, Holland, UK, Japan and Puerto Rico, under the direction of composers such as Manuel Ceide, Francis Schwartz and Henk Alkema. Upcoming CDs include a selection of jazz standards with the bassist Dominic Duval plus an album of new self-composed material with Jeremy Harman on cello (acoustic and electric). For further information on Sophie’s music visit her website: www.sophieduner.com, and to see more on her artwork go to: www.sophiedunerart. n com.

Sophie Dunér is a singer, songwriter, composer, arranger and visual artist from Sweden. Sophie has lived and performed in the United States and Spain and recently featured at the Bimbache openART Festival in El Hierro where her artwork was exhibited for the festival’s ten day duration, and her audiovisual music concert closed the event. Originally a jazz singer, she has evolved her songwriting and composing into a unique fusion of jazz and classical influences, using a soaring vocal style that perfectly blends with a string quartet or solo instrumentalist. Her last album, 2013’s The City of My Soul, was recorded and produced in London by Grammy award-winning producer Michael Haas, and released by Big Round Records / PARMA recordings. Her follow-up release, due to come out next year and tentativelytitled The City of Dizzy (a ref-

her musical repertoire and art portfolio – one of four grants awarded to her projects. After recording The City of My Soul, she performed an audiovisual concert – incorporating both her music and paintings – at Festival de Música Contemporánea de La Plata in Buenos Aires, Argentina, in September 2011. In 2013 Sophie featured as a composer on the Londonbased project, Women of Note, led by violinist and orchestra leader Diana Ambache; and in August 2014, during a tour of the USA, she performed at the PARMA Music Festival in New Hampshire. Her music has been described as a blend of romance and spirituality combined with a

Officially the largest foreign language newspaper in the Canary Islands.