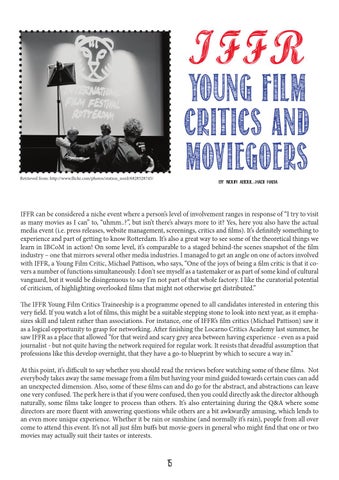 IFFR can be considered a niche event where a person’s level of involvement ranges in response of “I try to visit as many movies as I can” to, “uhmm..?”, but isn’t there’s always more to it? Yes, here you also have the actual media event (i.e. press releases, website management, screenings, critics and films). It’s definitely something to experience and part of getting to know Rotterdam. It’s also a great way to see some of the theoretical things we learn in IBCoM in action! On some level, it’s comparable to a staged behind-the scenes snapshot of the film industry – one that mirrors several other media industries. I managed to get an angle on one of actors involved with IFFR, a Young Film Critic, Michael Pattison, who says, “One of the joys of being a film critic is that it covers a number of functions simultaneously. I don't see myself as a tastemaker or as part of some kind of cultural vanguard, but it would be disingenuous to say I'm not part of that whole factory. I like the curatorial potential of criticism, of highlighting overlooked films that might not otherwise get distributed.” The IFFR Young Film Critics Traineeship is a programme opened to all candidates interested in entering this very field. If you watch a lot of films, this might be a suitable stepping stone to look into next year, as it emphasizes skill and talent rather than associations. For instance, one of IFFR’s film critics (Michael Pattison) saw it as a logical opportunity to grasp for networking. After finishing the Locarno Critics Academy last summer, he saw IFFR as a place that allowed “for that weird and scary grey area between having experience - even as a paid journalist - but not quite having the network required for regular work. It resists that dreadful assumption that professions like this develop overnight, that they have a go-to blueprint by which to secure a way in.” At this point, it’s difficult to say whether you should read the reviews before watching some of these films. Not everybody takes away the same message from a film but having your mind guided towards certain cues can add an unexpected dimension. Also, some of these films can and do go for the abstract, and abstractions can leave one very confused. The perk here is that if you were confused, then you could directly ask the director although naturally, some films take longer to process than others. It’s also entertaining during the Q&A where some directors are more fluent with answering questions while others are a bit awkwardly amusing, which lends to an even more unique experience. Whether it be rain or sunshine (and normally it’s rain), people from all over come to attend this event. It’s not all just film buffs but movie-goers in general who might find that one or two movies may actually suit their tastes or interests. 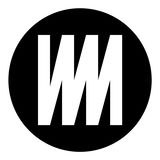