IARFC Awards - A History of Recipients 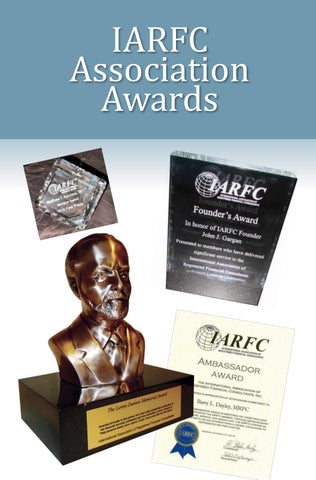 About the IARFCÂŽ Association IARFC Mission To recognize world class financial consultants and empower them to make a transformational difference in the financial lives of the families and communities they serve.

Loren Dunton 1918 -1997 From Lorenâ&amp;#x20AC;&amp;#x2122;s leadership would come an educational institution, the College for Financial Planning, and the personal financial planning curricula now taught on over one hundred campuses. In 1969 Loren Dunton convened a group of financial professionals in Chicago and founded an industry of outstanding service and commitment. As the first editor of Financial Planning magazine, he helped to publicize an emerging profession, bringing various practitioners together to a common cause, sharing practice and marketing techniques and promoting ethical conduct. That respected magazine has continued, contributing to the profession for thirty years. Loren promoted the value of the financial advisor as a professional whose quest for knowledge should never cease. He authored seven books that have helped to shape the careers and services of financial advisors. Lorenâ&amp;#x20AC;&amp;#x2122;s commitment to these principles was evidenced in the Institute for Consumer Financial Education that he nurtured for many years, and which earned a Presidential Citation for public service. It is in Lorenâ&amp;#x20AC;&amp;#x2122;s tradition of recognizing the value of professional advice and service that the IARFC each year presents the Loren Dunton Memorial Award to persons who have made a significant contribution to the financial services profession and to the public.

Criteria Those who are considered for the Award must currently meet or have met the following criteria:

Worked in a financial practice or firm more than 5 years

Provided outstanding service or leadership in the financial services industry

Promoted or participated in some aspect of financial education, either to the public or to members of the profession

Member of the IARFC

Barry L. Dayley, MRFC® Barry Dayley has worked in the financial planning and wealth management business since 1981 when he started his own Money Concepts Financial Planning Center in Las Vegas, Nevada. In 1985, he received a request from Jack Walsh, the founder of Money Concepts, to serve as a consultant for Money Concepts and CUNA Mutual to develop a financial planning program for credit unions nationwide. In this role, Barry helped lead the establishment of over 600 financial planning programs in credit unions across the United States. Later, Barry accepted a position as the Division Manager of Member Services, where he led the operations of CUNA Mutual Group in the Northwest Marketing division. In 1998, he returned to Money Concepts as a Senior Vice President with emphasis on financial institution development. Currently Barry is the Executive Vice President of Money Concepts with national and international responsibilities. Barry’s educational background includes: a Bachelor of Science from Brigham Young University with a degree in Financial and Estate Planning (1980), the Achievement of the Certified Financial Planner (1989), and the Mater Registered Financial Consultant (2017). He is a student of the business and is a frequent speaker at functions of the American Bankers Association, the National Federal Credit Union Association, and other industry conferences. In addition, Barry conducts ongoing series of training and continuing education programs nationally with the over 700 Representatives of Money Concepts Capital Corp. In spite of Barry’s demanding corporate responsibilities, he still maintains a very small financial planning client base to keep his skills sharp and maintain involvement in a profession he loves. Barry is the Chair of the MRFC Certification Board and promotes the MRFC credential to consultants.

to frankly explain what all financial consultants now recognizeâ&amp;#x20AC;Ś that the ethical sales of financial products

and delivery of competent advice is a noble calling.

FOUNDER&#39;S AWARD The Founder’s Award is bestowed in honor of the Founder of the IARFC, John J. Gargan and is presented to persons who have delivered significant service to the operations and growth of the International Association of Registered Financial Consultants.

Criteria Those who are considered for the Award must currently meet or have met the following criteria:

Past or present Board Trustee, Director, Officer, or Committee Member

Held a professional designation or credential awarded by the IARFC (i.e. RFC®, MRFC®)

Contributed to the growth of the IARFC membership by referring members, holding or attending events that additionally help expand the visibility of the Association

Burnett Marus, RFCÂŽ Retired Burnett Marus of Burnett Marus Associates in Richardson, TX has been a long time RFC from the beginning in 1984. With two terms on the IARFC Board of Directors and currently with the RFCÂŽ Retired Status, he has been a regular contributor to the Register. He has praised the IARFC for reaching beyond its geographical limits to include international chapters. Initially he was attracted to the Association by the multitude of professionals with years of experience and the concern about continuing education. The IARFC always provided a broader forum for topics that are inherent to financial consulting.

This Award is bestowed on those members who have selflessly supported the IARFC mission through extraordinary efforts, of time, service, and dedication. The Ambassador Award is an International Award to be awarded by each IARFC Chapter annually.

IARFC Member with more than 1 year of membership. Currently, ethically approved status or in good standing. Successfully supported the mission of the Association with extraordinary efforts of time, service and dedication.

Member Award for Dedication to Association Advancement Presented annually in appreciation to top IARFC members who have brought the most newly qualified professional consultants that join the ranks of the Association.

MEMBER AWARD Honored Recipients Members Award for Dedication to Association Advancement Presented annually in appreciation to top IARFC members who have brought the most new qualified professional consultants that join the ranks of the Association.

146 North Breiel Blvd. Middletown, Ohio 45042 iarfc.org 800.532.9060 Founded in 1984, the International Association of Registered Financial Consultants (IARFC®) is a non-profit 501(c)6 professional association of financial consultants in the United States and Internationally. The IARFC strengthens the financial services profession through awarding of designations/credential, adherence to ethical behavior by its members, and a focus on continuing professional education. Its mission… To recognize world class financial consultants and empower them to make a transformational difference in the financial lives of the families and communities they serve. The IARFC is a 501©6.

IARFC Awards - A History of Recipients 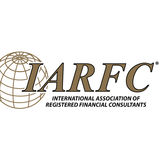