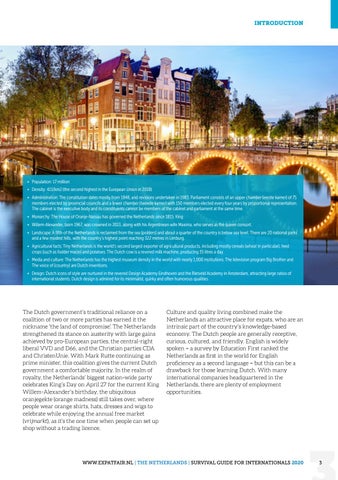 • Population: 17 million • Density: 411/km2 (the second highest in the European Union in 2018) • Administration: The constitution dates mostly from 1848, and revisions undertaken in 1983. Parliament consists of an upper chamber (eerste kamer) of 75 members elected by provincial councils and a lower chamber (tweede kamer) with 150 members elected every four years by proportional representation. The cabinet is the executive body and its constituents cannot be members of the cabinet and parliament at the same time. • Monarchy: The House of Oranje-Nassau has governed the Netherlands since 1815. King • Willem-Alexander, born 1967, was crowned in 2013, along with his Argentinean wife Maxima, who serves as the queen consort. • Landscape: A fifth of the Netherlands is reclaimed from the sea (polders) and about a quarter of the country is below sea level. There are 20 national parks and a few modest hills, with the country’s highest point reaching 322 metres in Limburg. • Agricultural facts: Tiny Netherlands is the world’s second largest exporter of agricultural products, including mostly cereals (wheat in particular), feed crops (such as fodder maize) and potatoes. The Dutch cow is a revered milk machine, producing 35 litres a day. • Media and culture: The Netherlands has the highest museum density in the world with nearly 1,000 institutions. The television program Big Brother and The voice of [country] are Dutch inventions. • Design: Dutch icons of style are nurtured in the revered Design Academy Eindhoven and the Rietveld Academy in Amsterdam, attracting large ratios of international students. Dutch design is admired for its minimalist, quirky and often humorous qualities.

The Dutch government’s traditional reliance on a coalition of two or more parties has earned it the nickname ‘the land of compromise’. The Netherlands strengthened its stance on austerity with large gains achieved by pro-European parties, the central-right liberal VVD and D66, and the Christian parties CDA and ChristenUnie. With Mark Rutte continuing as prime minister, this coalition gives the current Dutch government a comfortable majority. In the realm of royalty, the Netherlands’ biggest nation-wide party celebrates King’s Day on April 27 for the current King Willem-Alexander’s birthday, the ubiquitous oranjegekte (orange madness) still takes over, where people wear orange shirts, hats, dresses and wigs to celebrate while enjoying the annual free market (vrijmarkt), as it’s the one time when people can set up shop without a trading licence.

Culture and quality living combined make the Netherlands an attractive place for expats, who are an intrinsic part of the country’s knowledge-based economy. The Dutch people are generally receptive, curious, cultured, and friendly. English is widely spoken – a survey by Education First ranked the Netherlands as first in the world for English proficiency as a second language – but this can be a drawback for those learning Dutch. With many international companies headquartered in the Netherlands, there are plenty of employment opportunities.