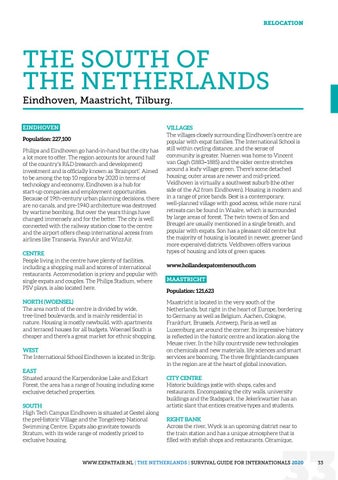 THE SOUTH OF THE NETHERLANDS Eindhoven, Maastricht, Tilburg. EINDHOVEN Population: 227,100 Philips and Eindhoven go hand-in-hand but the city has a lot more to offer. The region accounts for around half of the country’s R&D (research and development) investment and is officially known as ‘Brainport’. Aimed to be among the top 10 regions by 2020 in terms of technology and economy, Eindhoven is a hub for start-up companies and employment opportunities. Because of 19th-century urban planning decisions, there are no canals, and pre-1940 architecture was destroyed by wartime bombing. But over the years things have changed immensely and for the better. The city is well connected with the railway station close to the centre and the airport offers cheap international access from airlines like Transavia, RyanAir and WizzAir. CENTRE People living in the centre have plenty of facilities, including a shopping mall and scores of international restaurants. Accommodation is pricey and popular with single expats and couples. The Philips Stadium, where PSV plays, is also located here. NORTH (WOENSEL) The area north of the centre is divided by wide, tree-lined boulevards, and is mainly residential in nature. Housing is mostly newbuild, with apartments and terraced houses for all budgets. Woensel South is cheaper and there’s a great market for ethnic shopping. WEST The International School Eindhoven is located in Strijp. EAST Situated around the Karpendonkse Lake and Eckart Forest, the area has a range of housing including some exclusive detached properties. SOUTH High Tech Campus Eindhoven is situated at Gestel along the preHistoric Village and the Tongelreep National Swimming Centre. Expats also gravitate towards Stratum, with its wide range of modestly priced to exclusive housing.

VILLAGES The villages closely surrounding Eindhoven’s centre are popular with expat families. The International School is still within cycling distance, and the sense of community is greater. Nuenen was home to Vincent van Gogh (1883–1885) and the older centre stretches around a leafy village green. There’s some detached housing; outer areas are newer and mid-priced. Veldhoven is virtually a southwest suburb (the other side of the A2 from Eindhoven). Housing is modern and in a range of price bands. Best is a contemporary, well-planned village with good access, while more rural retreats can be found in Waalre, which is surrounded by large areas of forest. The twin towns of Son and Breugel are usually mentioned in a single breath, and popular with expats. Son has a pleasant old centre but the majority of housing is located in newer, greener (and more expensive) districts. Veldhoven offers various types of housing and lots of green spaces. www.hollandexpatcentersouth.com MAASTRICHT Population: 121,623 Maastricht is located in the very south of the Netherlands, but right in the heart of Europe, bordering to Germany as well as Belgium. Aachen, Cologne, Frankfurt, Brussels, Antwerp, Paris as well as Luxemburg are around the corner. Its impressive history is reflected in the historic centre and location along the Meuse river. In the hilly countryside new technologies on chemicals and new materials, life sciences and smart services are booming. The three Brightlands campuses in the region are at the heart of global innovation. CITY CENTRE Historic buildings jostle with shops, cafes and restaurants. Encompassing the city walls, university buildings and the Stadspark, the Jekerkwartier has an artistic slant that entices creative types and students. RIGHT BANK Across the river, Wyck is an upcoming district near to the train station and has a unique atmosphere that is filled with stylish shops and restaurants. Céramique,