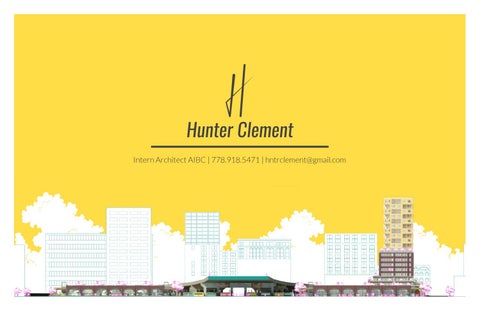 Designing space, and experiences, is when Iâ&#x20AC;&#x2122;m at my best. My design process blends human-centric principles with interactive collaboration. I enjoy creating workable solutions for clients, and enriching peopleâ&#x20AC;&#x2122;s lives, through architecture.

Evans Architecture August 2020 - November 2020 | Vectorworks, Adobe CS I had the pleasure to work on a contract basis with the team at Evans Architecture to develop a couple BC school projects. Working under a tight CP deadline, I learned Vectorworks within a weekend and assisted with overall drawing production; especially renderings and interior/exterior elevations.

Top: Lobby sketch I developed for the client using Vectorworks, hand drawing and Photoshop. Right: interior elevations made in Vectorworks for construction

This school is meant to double as a social centre for the First Nations community. I developed exterior elevations seen to the right, as well as more conceptual colour schemes like the one down below. The art I included needed to be culturally appropriate, so I did a fair amount of research and coordination with my team to ensure this need was met.

Raymond Letkeman Architects Inc. Mar 2017 - Feb 2020 | Sketchup, AutoCAD, Adobe CS My first architecture job was with RLA in 2017. I learned what goes into the typical office set and how to follow firm-wide standards of the highest quality. My focus was producting drawing sets (working drawings, permit drawings, etc.) for primarily large-scale, mid-rise part 4 and part 9 construction.

James Beard Public Market Jan 2015 - June 2015 | Revit, Sketchup, AutoCAD, Adobe CS Oregon boasts countless farms, breweries, and restaurants, but one key element has been missing for decades: a flagship public market to showcase the best of local food and products. The chosen site was prime waterfront realestate, which was bisected by the iconic Morrison Bridge. The marketâ&#x20AC;&#x2122;s design responds to the bridgeâ&#x20AC;&#x2122;s form in its design and layout, while prioritizing public support spaces over privatized ones.

The biggest design challenge was keeping a cohesive market hall on a site bisected by a bridge; connecting through the bridge was important. Instead of building over the bridge, or having two independent market halls on either side, how could I integrate the structure into my design? I decided to mimic the bridgeâ&#x20AC;&#x2122;s column spacing and material pallette.

Stalls march through one side of the market, pass beneath the concrete belly of Morrison Bridge, and reconnect to the marketâ&#x20AC;&#x2122;s other building. Wide, tree-covered sidewalks hum with activity on both sides of the market hall. Between the bridgeâ&#x20AC;&#x2122;s on-ramps is a plaza filled with movable chairs and tables. This bustling living room hosts holiday events, protests, and family gatherings.

A gradual, landscaped incline leads visitors between the bridge market to the MAX tram line below. Lights and flags run between the built environment and the bridge, forming ‘ceilings’ for outdoor ‘rooms’. Portland’s artists decorate the concrete underpass in colour and murals.

Medford Fire Station #5 Apr 2014 - June 2014 | Revit, Adobe CS I designed a fire station for Medford firefighters and the greater community. Their existing station was falling into disrepair and didnâ&#x20AC;&#x2122;t address their needs anymore. My design simultaneously acted as a second home for its volunteers and paid staff, and as a beacon of public safety.

Developing these spaces was a balancing act between essential travel distance and aesthetic considerations. The station needed to be inviting, comfortable, and calming. At the same time, every second wasted exiting the building jeapardized citizens in crisis. The station split into three general design components. The first housed community outreach spaces, a courtyard and a gym; the second, a grand hall housed all residential activities; the third, the apparatus bays with support spaces. Together, these areas served the community, while backing the couragous fierfighers and their tireless staff.

An early axonometric sketch of the spaces in context. This kind of excercise helped me get a sense of scale and placement within its context.

This great hallway is an all-in-one living room, kitchen, dining room, and rec room. Light reflects off the warm wood ceilings and walls, filtering its glow throughout the space. Large glulam beams accentuate the room’s size while adding to the space’s warmth. Morning coffee’s smell wakes up the early shift sleeping in the adjacent bunk rooms. A firefighter turns on the news while another fighter starts cooking an omlette in the kitchen nearby. Well-rested and fed, the group is ready to serve Medford.

Public groups and firefighters take orientations in this classroom. Fire engines wait restlessly in the background.

A vibrant maple grows in the courtyard, providing shade and a place to rest for a weary firefighter.

At night, lights from the firehouse put the trucks on display; a visual sign that these firefighters never stop protecting their community.

Hancock Field Station Sept 2014 - Dec 2014 | Sketchup, AutoCAD, Adobe CS I designed a campground that strengthens social bonds between its varied users, and respects the natural environment. Campers entered the Field Station and slept in cabins located nearby, forming a village at night. During the day, they learned about the world in classrooms neslted between the hills. Connecting them all was Berrie Hall, waiting at the centre of the campground.

Shown here are early sketches of teaching areas and vignettes of the campâ&#x20AC;&#x2122;s atmosphere. I wanted everyone, including children on a field trip, or astronomy buffs scouting the stars, to be awed at natureâ&#x20AC;&#x2122;s wonder. Each built structure provided minimal barriers between Earth and humans, and were built out of reusable, natural materials, like stone and wood.

I circled group cabins around the the campsiteâ&#x20AC;&#x2122;s entry, welcoming new arrivals with open arms. The classrooms were snug between the hills, forming an educational village all of its own. In the middle of the field station was Berrie Hall, where the camp gathered to eat, talk about the day, and unwind.

Cabins were organized around a central porch. Groups gathered and socialized on the covered entry patio, while separate from the rest of the field station. This central patio allowed maximum cross ventilation, naturally cooling the cabin during hot summer months.

Berrie Hall stands at the heart of the campground. Placed in the centre of the Field Station, diners look out at the fields beyond while they eat. Doors on either side of the dining area open to the outdoors, letting fresh light and air cross through the space. On either side, offices and kitchen support spaces frame views of the rest of the Field Station. Sounds of children playing and wind rustling the leaves waft through the rafters.

Thank You! For more information on myself and my projects, check out my personal website hunterclementdesign.com 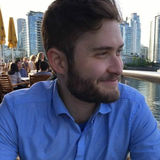