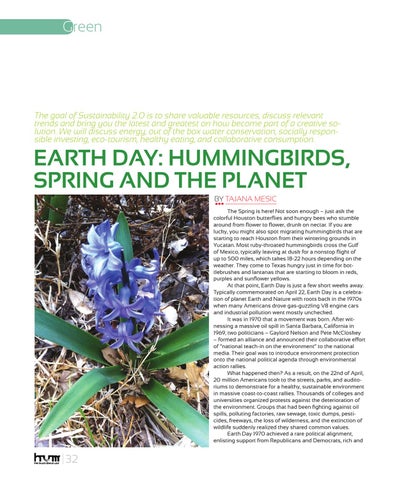 The goal of Sustainability 2.0 is to share valuable resources, discuss relevant trends and bring you the latest and greatest on how become part of a creative solution. We will discuss energy, out of the box water conservation, socially responsible investing, eco-tourism, healthy eating, and collaborative consumption.

EARTH DAY: HUMMINGBIRDS, SPRING AND THE PLANET BY TAJANA MESIC The Spring is here! Not soon enough – just ask the colorful Houston butterﬂies and hungry bees who stumble around from ﬂower to ﬂower, drunk on nectar. If you are lucky, you might also spot migrating hummingbirds that are starting to reach Houston from their wintering grounds in Yucatan. Most ruby-throated hummingbirds cross the Gulf of Mexico, typically leaving at dusk for a nonstop ﬂight of up to 500 miles, which takes 18-22 hours depending on the weather. They come to Texas hungry just in time for bottlebrushes and lantanas that are starting to bloom in reds, purples and sunﬂower yellows. At that point, Earth Day is just a few short weeks away. Typically commemorated on April 22, Earth Day is a celebration of planet Earth and Nature with roots back in the 1970s when many Americans drove gas-guzzling V8 engine cars and industrial pollution went mostly unchecked. It was in 1970 that a movement was born. After witnessing a massive oil spill in Santa Barbara, California in 1969, two politicians – Gaylord Nelson and Pete McCloskey – formed an alliance and announced their collaborative effort of “national teach-in on the environment” to the national media. Their goal was to introduce environment protection onto the national political agenda through environmental action rallies. What happened then? As a result, on the 22nd of April, 20 million Americans took to the streets, parks, and auditoriums to demonstrate for a healthy, sustainable environment in massive coast-to-coast rallies. Thousands of colleges and universities organized protests against the deterioration of the environment. Groups that had been ﬁghting against oil spills, polluting factories, raw sewage, toxic dumps, pesticides, freeways, the loss of wilderness, and the extinction of wildlife suddenly realized they shared common values. Earth Day 1970 achieved a rare political alignment, enlisting support from Republicans and Democrats, rich and 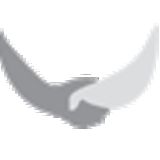