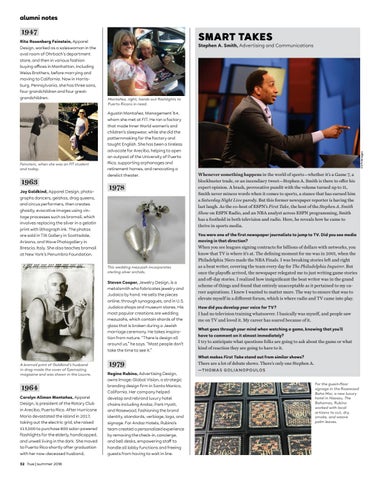 1947 Rita Rosenberg Feinstein, Apparel Design, worked as a saleswoman in the oval room of Ohrbach’s department store, and then in various fashion buying offices in Manhattan, including Weiss Brothers, before marrying and moving to California. Now in Harrisburg, Pennsylvania, she has three sons, four grandchildren and four greatgrandchildren.

Stephen A. Smith, Advertising and Communications

Montañez, right, hands out flashlights to Puerto Ricans in need.

Feinstein, when she was an FIT student and today.

whom she met at FIT. He ran a factory that made Inner World women’s and children’s sleepwear, while she did the patternmaking for the factory and taught English. She has been a tireless advocate for Arecibo, helping to open an outpost of the University of Puerto Rico, supporting orphanages and retirement homes, and renovating a derelict theater.

Steven Cooper, Jewelry Design, is a metalsmith who fabricates jewelry and Judaica by hand. He sells the pieces online, through synagogues, and in U.S. Judaica shops and museum stores. His most popular creations are wedding mezuzahs, which contain shards of the glass that is broken during a Jewish marriage ceremony. He takes inspiration from nature. “There is design all around us,” he says. “Most people don’t take the time to see it.” A bromoil print of Goldkind’s husband in drag made the cover of Eyemazing magazine and was shown in the Louvre.

1964 Carolyn Allman Montañez, Apparel Design, is president of the Rotary Club in Arecibo, Puerto Rico. After Hurricane Maria devastated the island in 2017, taking out the electric grid, she raised $13,000 to purchase 800 solar-powered flashlights for the elderly, handicapped, and unwell living in the dark. She moved to Puerto Rico shortly after graduation with her now-deceased husband, 32 hue | summer 2018

Whenever something happens in the world of sports—whether it’s a Game 7, a blockbuster trade, or an incendiary tweet—Stephen A. Smith is there to offer his expert opinion. A brash, provocative pundit with the volume turned up to 11, Smith never minces words when it comes to sports, a stance that has earned him a Saturday Night Live parody. But this former newspaper reporter is having the last laugh. As the co-host of ESPN’s First Take, the host of the Stephen A. Smith Show on ESPN Radio, and an NBA analyst across ESPN programming, Smith has a foothold in both television and radio. Here, he reveals how he came to thrive in sports media. You were one of the first newspaper journalists to jump to TV. Did you see media moving in that direction? When you see leagues signing contracts for billions of dollars with networks, you know that TV is where it’s at. The defining moment for me was in 2001, when the Philadelphia 76ers made the NBA Finals. I was breaking stories left and right as a beat writer, covering the team every day for The Philadelphia Inquirer. But once the playoffs arrived, the newspaper relegated me to just writing game stories and off-day stories. I realized how insignificant the beat writer was in the grand scheme of things and found that entirely unacceptable as it pertained to my career aspirations. I knew I wanted to matter more. The way to ensure that was to elevate myself in a different forum, which is where radio and TV came into play. How did you develop your voice for TV? I had no television training whatsoever. I basically was myself, and people saw me on TV and loved it. My career has soared because of it. What goes through your mind when watching a game, knowing that you’ll have to comment on it almost immediately? I try to anticipate what questions folks are going to ask about the game or what kind of reaction they are going to have to it. What makes First Take stand out from similar shows? There are a lot of debate shows. There’s only one Stephen A. —THOMAS GOLIANOPOULOS For the guest-floor signage in the Rosewood Baha Mar, a new luxury hotel in Nassau, The Bahamas, Rubino worked with local artisans to cut, dry, smoke, and weave palm leaves. 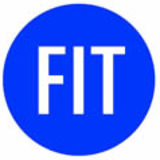