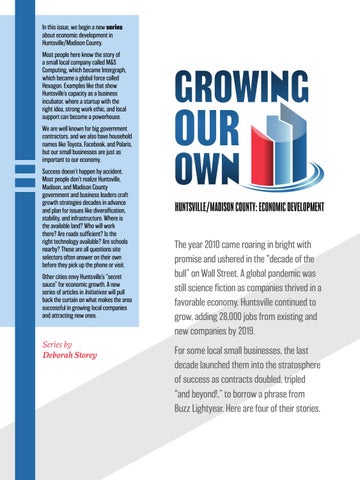 In this issue, we begin a new series about economic development in Huntsville/Madison County. Most people here know the story of a small local company called M&S Computing, which became Intergraph, which became a global force called Hexagon. Examples like that show Huntsville’s capacity as a business incubator, where a startup with the right idea, strong work ethic, and local support can become a powerhouse. We are well known for big government contractors, and we also have household names like Toyota, Facebook, and Polaris, but our small businesses are just as important to our economy. Success doesn’t happen by accident. Most people don’t realize Huntsville, Madison, and Madison County government and business leaders craft growth strategies decades in advance and plan for issues like diversification, stability, and infrastructure. Where is the available land? Who will work there? Are roads sufficient? Is the right technology available? Are schools nearby? These are all questions site selectors often answer on their own before they pick up the phone or visit. Other cities envy Huntsville’s “secret sauce” for economic growth. A new series of articles in Initiatives will pull back the curtain on what makes the area successful in growing local companies and attracting new ones.

The year 2010 came roaring in bright with promise and ushered in the “decade of the bull” on Wall Street. A global pandemic was still science fiction as companies thrived in a favorable economy. Huntsville continued to grow, adding 28,000 jobs from existing and new companies by 2019. For some local small businesses, the last decade launched them into the stratosphere of success as contracts doubled, tripled “and beyond!,” to borrow a phrase from Buzz Lightyear. Here are four of their stories.