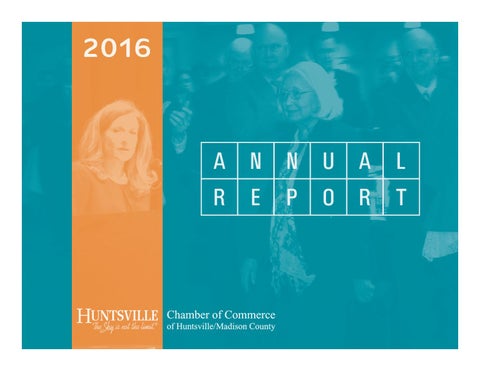 A Message from Chip

We made significant progress in a number of key areas in 2016. Two key areas impacting economic development were the certification of the Huntsville Mega Site and the completion of the CRP Master Plan. Both position us well for future growth. The reactivation of the Chamber Foundation will allow us to enhance our workforce development efforts by providing professional development to educators teaching the 9th Grade Career Prep Classes in Madison County and the Cities of Madison and Huntsville. All three of these are significant steps forward in ensuring a strong and dynamic regional economy. Our support of Small businesses was enhanced with the first full year of operation of both the Toyota Small Business Training facility and the UAH SBDC which relocated to the 3rd floor of the Chamber. We are proud of the improvements we have made in providing services to our small business members and look forward to enhancing it further in 2017. The capstone of the year was the celebration of Redstone Arsenal’s 75th Anniversary. Our community and the region are the beneficiaries of the work of many that came before us – who had a vision for what the Arsenal could become, and the work of our current leadership who are building on that foundation. Redstone is now a vital part of our Nation’s national defense and security infrastructure due to the outstanding work of the men and women who work on the Arsenal, as well as those whose vision lead to its growth and development. We look forward to an outstanding 2017!

GEEK2GEEK This Cummings Research Park After Hours event is a facilitated networking opportunity and social for member companies in the Park to discover and learn about technology being developed by other CRP companies.

Held twice a year to provide a casual and lively atmosphere for business professionals to network, this event is all about business in action and making connections – in a tabletop exhibit format and ending with a BUSINESS AFTER HOURS event. MAY 11, 2016

ALABAMA UPDATE WITH GOV. BENTLEY This annual event featured an address from Alabama Governor Robert Bentley on the State of the State and our community’s role.

ARMED FORCES CELEBRATION A week-long celebration including a Proclamation Signing, Concert in the Park, and a Chamber-hosted dinner that featured Gen. Dennis Via, U.S. Army Materiel Command. JUNE 15, 2016

BUSINESS AFTER HOURS These events offer a networking opportunity for members to come together in a relaxed social atmosphere.

This Cummings Research Park event series focuses on a different industry theme each quarter. For this particular date, CRP employees learned about the Severe Weather companies and college offerings in the Park.

Congressman Brooks’ briefing included his views on the past year’s progress APRIL 11, 2016 on the issues that impact our region and his outlook for the year ahead. CHAMBER SPRING

STATE OF THE COUNTY ADDRESS This annual event provided Chairman Dale Strong with an opportunity to give an update on critical issues facing the county and his views on the past year’s progress, the issues that will impact our region and his outlook for the year ahead.

STATE OF THE ECONOMY PRESENTATION

This fast paced, bi-monthly networking event brings Chamber members together with new business contacts in a unique and entertaining format.

ValuePenguin: Huntsville is among Most Educated Cities in 2016

Southern Living: Huntsville named as one of the South’s Best College Towns

The Chamber and its economic development partners hosted five business development representatives for a two-day tour of Huntsville’s aerospace assets.

The holiday event welcomed Chamber members, community and Redstone Arsenal senior leaders and local elected officials. Every year, it is one of the most celebrated community holiday events of the season.

WINE & CHEESE WITH THE PRESIDENT By special invitation, members are invited to a special reception with the Chamber President for updates and information about being a member.

STATE OF THE CITY ADDRESS Mayor Battle highlighted the city’s progress in economic development and presented his “annual report” to the citizens of Huntsville regarding the accomplishments from the past year and his outlook for the year ahead.

An Entrepreneur Forum – bringing together a panel of local entrepreneurs to offer insight on how to stay viable and successful through good and bad climates, followed by a Q&A session.

ALABAMA RETAILER OF THE YEAR

Mint.com: Huntsville is among Top 17 Most Affordable U.S. Cities of 2016

Forbes: Huntsville is among 25 BestPaying Cities for Software Engineers

REDSTONE UPDATE Members heard from senior leaders from Redstone Arsenal – highlighting their diverse roles and missions, and share where these commands, organizations, and the installation are headed in the future. Command briefings + luncheon with keynote speaker Gen. Gustave Perna, U.S. Army Materiel Command.

Economic Development The Chamber is the lead economic development organization for Huntsville/Madison County, one of the most dynamic economies in the United States. Through local, state and regional partnerships, we recruit and retain jobs and capital investment, focusing on aerospace, defense, advanced manufacturing, information technology and life sciences.

Cummings Research Park Cummings Research Park (CRP) is the Nationâ&#x20AC;&#x2122;s second largest research park with 3,843 acres and 300 companies. We manage, market internally and promote CRP to expand industry and recruit new companies to a vibrant and connected community that fosters ingenuity, creativity and scientific achievements that solve our Nationâ&#x20AC;&#x2122;s most complex challenges.

MASTER PLAN PROJECT In May 2016, drafts of the new comprehensive master plan and design guidelines were unveiled for CRP followed by 21 stakeholder meetings and two public open houses for review/ comment on the draft master plan and design guidelines. As part of our master planning effort, we led a rebranding effort for CRP that included a new identity package featuring new messaging, a new logo, and a suite of creative elements for the Park. Following stakeholder feedback, the revised and final master plan was approved by the CRP Board of Directors and the City of Huntsville Planning Commission.

DRIVEN BY SCIENCE. POWERED BY PEOPLE.

Organized and launched the first-ever CRP Trolley Tech Tours â&#x20AC;&#x201D; trolley nighttime tours of CRP companies â&#x20AC;&#x201C; to highlight and build awareness around the amazing companies and technologies/products that exist in CRP. We hosted three.

HudsonAlpha groundbreaking for the Paul Propst Center for Personalized Medicine and 4th new building on their biotech campus in CRP.

Government & Public Affairs The Chamber represents the business interests of the Huntsville and Madison County area on the local, state and national levels of government, promoting policies and legislation that allow for the continued economic prosperity of the region. Roughly half of the local economy is a function of federal spending on military, space and homeland security concerns, consequently much of the Chamberâ&#x20AC;&#x2122;s government and public affairs efforts are focused on the growth and protection of these activities and the Redstone Arsenal. The division also conducts a number of events which are intended to enhance relationships with elected local, State and Federal officials and key federal partners.

Workforce & Education We are passionate about developing, employing and retaining the smart, talented people we have in our region. Through partnerships with industry, education and public sector stakeholders, we ensure our region has the quantity and quality of talent to meet employer needs and support sustained growth.

Huntsville/Madison County was selected by the U.S. Chamber of Commerce Foundation as the inaugural community to highlight the importance of high education standards and community engagement through the Achieving Tomorrowâ&#x20AC;&#x2122;s Voices campaign.

350 attended this annual event, bringing together

our business and education communities to highlight the Pre-K-12 education programs that are preparing students for long-term success in our region.

40+ employers participated in the annual College & Career Fair; reached 6,000+ high school juniors and seniors from all three public school districts in our community with information about regional careers.

Membership As the largest chamber in Alabama, the Chamber of Commerce of Huntsville/Madison County relies on a base of highly engaged members-from global corporations to middle-market companies to local entrepreneurs and small businesses-to support the organizationâ&#x20AC;&#x2122;s mission of making Huntsville one of the worldâ&#x20AC;&#x2122;s best places to live, work and build a business. As a champion of the entrepreneurial spirit, the Chamber provides an array of opportunities for small and medium-sized enterprises to participate in programs, events and activities designed to support and encourage growth in their companies as well as their contribution to the economic vitality of the region.

Marketing & Communications The Chamber facilitates a strategic and purposeful flow of communication to our highly engaged members and general public. We communicate using a progressive, multifaceted marketing strategy that includes traditional media, print, digital, and social media. Our strategy was designed to maximize reach to members and non-members, and to expand our sphere of influence in the community and around the globe.

Huntsville named Top 5 destination to get you psyched for hiking. – REI CO-OP, JANUARY 2016

Small Business & Events 2016 was the year of change – we refreshed several events/programs, such as replacing Business After Hours with Business & Brews – turning the latter into the most popular networking event of the year. We recharged the Small Business Awards and increased both nominations and attendees by more than 46 percent and increased revenue from 2015 by 213 percent. Collaboration continued as we partnered with the public library to offer computer application classes, and with ALDOL to inform and educate members and the community about the new Overtime Final Ruling Law. We also created the ‘Doing Business with…’ sessions to inform members about all of the procurement opportunities available in the region.

BOARD OF DIRECTORS Bill Bailey

CHAMBER OF COMMERCE OF HUNTSVILLE/MADISON COUNTY • 2016