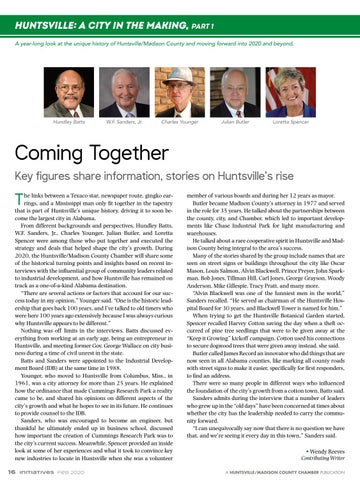 HUNTSVILLE: A CITY IN THE MAKING, PART 1 A year-long look at the unique history of Huntsville/Madison County and moving forward into 2020 and beyond.

he links between a Texaco star, newspaper route, gingko earrings, and a Mississippi man only fit together in the tapestry that is part of Huntsville’s unique history, driving it to soon become the largest city in Alabama. From different backgrounds and perspectives, Hundley Batts, W.F. Sanders, Jr., Charles Younger, Julian Butler, and Loretta Spencer were among those who put together and executed the strategy and deals that helped shape the city’s growth. During 2020, the Huntsville/Madison County Chamber will share some of the historical turning points and insights based on recent interviews with the influential group of community leaders related to industrial development, and how Huntsville has remained on track as a one-of-a-kind Alabama destination. “There are several actions or factors that account for our success today in my opinion,” Younger said. “One is the historic leadership that goes back 100 years, and I’ve talked to old timers who were here 100 years ago extensively because I was always curious why Huntsville appears to be different.” Nothing was off limits in the interviews. Batts discussed everything from working at an early age, being an entrepreneur in Huntsville, and meeting former Gov. George Wallace on city business during a time of civil unrest in the state. Batts and Sanders were appointed to the Industrial Development Board (IDB) at the same time in 1988. Younger, who moved to Huntsville from Columbus, Miss., in 1961, was a city attorney for more than 25 years. He explained how the ordinance that made Cummings Research Park a reality came to be, and shared his opinions on different aspects of the city’s growth and what he hopes to see in its future. He continues to provide counsel to the IDB. Sanders, who was encouraged to become an engineer, but thankful he ultimately ended up in business school, discussed how important the creation of Cummings Research Park was to the city’s current success. Meanwhile, Spencer provided an inside look at some of her experiences and what it took to convince key new industries to locate in Huntsville when she was a volunteer

member of various boards and during her 12 years as mayor. Butler became Madison County’s attorney in 1977 and served in the role for 35 years. He talked about the partnerships between the county, city, and Chamber, which led to important developments like Chase Industrial Park for light manufacturing and warehouses. He talked about a rare cooperative spirit in Huntsville and Madison County being integral to the area’s success. Many of the stories shared by the group include names that are seen on street signs or buildings throughout the city like Oscar Mason, Louis Salmon, Alvin Blackwell, Prince Preyer, John Sparkman, Bob Jones, Tillman Hill, Carl Jones, George Grayson, Woody Anderson, Mike Gillespie, Tracy Pratt, and many more. “Alvin Blackwell was one of the funniest men in the world,” Sanders recalled. “He served as chairman of the Huntsville Hospital Board for 30 years, and Blackwell Tower is named for him.” When trying to get the Huntsville Botanical Garden started, Spencer recalled Harvey Cotton saving the day when a theft occurred of pine tree seedlings that were to be given away at the “Keep it Growing” kickoff campaign. Cotton used his connections to secure dogwood trees that were given away instead, she said. Butler called James Record an innovator who did things that are now seen in all Alabama counties, like marking all county roads with street signs to make it easier, specifically for first responders, to find an address. There were so many people in different ways who influenced the foundation of the city’s growth from a cotton town, Batts said. Sanders admits during the interview that a number of leaders who grew up in the “old days” have been concerned at times about whether the city has the leadership needed to carry the community forward. “I can unequivocally say now that there is no question we have that, and we’re seeing it every day in this town,” Sanders said. ■ Wendy Reeves Contributing Writer A HUNTSVILLE/MADISON COUNTY CHAMBER PUBLICATION