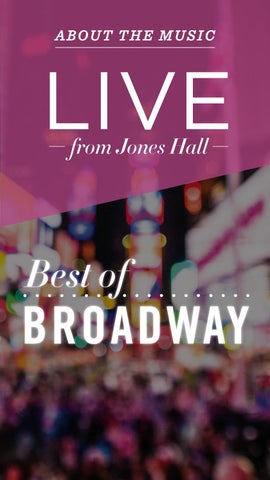 THIS PERFORMANCE IS BROUGHT TO YOU BY

LIVESTREAM OF HOUSTON SYMPHONY CONCERTS IS MADE POSSIBLE BY

THIS PERFORMANCE IS GENEROUSLY SUPPORTED BY

THE HOUSTON SYMPHONY WOULD LIKE TO THANK OUR GENEROUS SEASON SPONSORS

The Houston Symphony is funded in part by the City of Houston through Houston Arts Alliance.

THE HOUSTON SYMPHONY WOULD LIKE TO THANK OUR GENEROUS SERIES SPONSORS

THEATRE UNDER THE STARS

On Tonight’s Program Selections to be announced from the stage.

Broadway theatres often do not include a “Row I,” as eager theatergoers confused “I” with the number one and would clamor to the front row, only to be disappointed when they realized their seat was further back.

While there are over 40 Broadway theaters in New York City, only 4 are located on the actual Broadway street.

PRINCIPAL POPS CONDUCTOR Steven Reineke has established himself as one of North America’s leading conductors of popular music. In addition to his role as Principal POPS Conductor of the Houston Symphony, this season, he celebrates his 10th anniversary as music director of The New York Pops at Carnegie Hall. Additionally, he is principal pops conductor of the National Symphony Orchestra at the John F. Kennedy Center for the Performing Arts and the Toronto Symphony Orchestra. Steven is a frequent guest conductor with The Philadelphia Orchestra and his extensive North American conducting appearances include Atlanta, Cincinnati, Edmonton, San Francisco, and Sarasota. On stage, he has created programs and collaborated with a range of leading artists from the worlds of hip hop, Broadway, television, and rock, including Common, Kendrick Lamar, Nas, Sutton Foster, Megan Hilty, Cheyenne Jackson, Wayne Brady, Peter Frampton, and Ben Folds, among others. In 2017, he was featured on NPR’s All Things Considered leading the National Symphony Orchestra, in a first for the show’s 45-year history, performing live music excerpts between news segments. In 2018, Steven led the same orchestra and hip hop legend Nas performing his seminal album, Illmatic, on PBS’s Great Performances. As the creator of more than 100 orchestral arrangements for the Cincinnati Pops Orchestra, Steven’s work has been performed worldwide, and can be heard on numerous Cincinnati Pops Orchestra recordings on the Telarc label. His symphonic works Celebration Fanfare, The Legend of Sleepy Hollow and Casey at the Bat are performed frequently in North America, including performances by the New York Philharmonic and Los Angeles Philharmonic. His Sun Valley Festival Fanfare commemorated the Sun Valley Summer Symphony’s pavilion, and his Festival Te Deum and Swan’s Island Sojourn were debuted by the Cincinnati Symphony and Cincinnati Pops Orchestras. His numerous wind ensemble compositions are published by the C.L. Barnhouse Company and are performed by concert bands worldwide. A native of Ohio, Steven is a graduate of Miami University of Ohio, where he earned Bachelor of Music degrees with honors in both trumpet performance and music composition. He lives in New York City with his husband, Eric Gabbard.

Simone has appeared in several live and theatrical productions. You may have recently seen her opening the Houston Thanksgiving Day parade as well as TUTS’ productions of Elf, The Wiz, and Memphis to name just a few. Simone’s love for the stage has blessed her with the ability to travel the world with Royal Caribbean cruise lines and even tour with Todrick Hall! Currently, Simone is singing with The Drywater Band and you can look forward to seeing her soon as Deloris Van Cartier in TUTS’ production of Sister Act. A native of Arlington, TX, Simone has been in Houston for 6 years and couldn’t be happier. A special thank you to her family for always being not only her support but her peace, and to her TUTS family for always thinking of her and providing a safe place where artists can grow! Simone can be reached at @simonegundy on Instagram and @simonejasmine on Facebook.

Courtney Markowitz is thrilled to be making her Houston Symphony debut for such a special and much-needed event for the arts. Now a proud Houston native, Courtney made her Broadway debut in Jekyll & Hyde alongside Constantine Maroulis and Deborah Cox. She also appeared in National Touring productions of Jekyll & Hyde, Spring Awakening, and Neil Berg’s 100 Years of Broadway. Previously in Houston, she starred as “Mother” in the awardwinning production of Ragtime at Theatre Under The Stars. Other favorite TUTS shows include Mary Poppins, Into the Woods, Bonnie & Clyde, and Lizzie the Musical. This holiday season, she was seen as Doris Walker in Miracle on 34th Street at Stages. As a vocalist, Courtney has performed with the San Francisco Symphony, Pittsburgh Symphony POPS, Wheeling Symphony, and as a National Anthem soloist for the San Francisco Giants and Pittsburgh Pirates. She holds a BFA in Music Theatre from Elon University and is a proud member of Actor’s Equity Association. A huge thank you to Houston Symphony and Theatre Under The Stars for bringing the arts back to all of us.

Noah J. Ricketts is an actor and singer originally from Louisville, KY. Heâ&#x20AC;&#x2122;s enjoyed roles on Broadway in Beautiful, the Carole King Musical and most recently Kristoff in Frozen, on Broadway. In addition to theatre, Noah has played roles on television and film, such as Kai in American Gods on STARZ; River in High Fidelity on Hulu; and Nico in The Sixth Borough. He believes that the next generation of young artists will save us, so he spends his down time teaching students private acting, singing, and audition technique with Online Arts Advancement NYC. He recently established the #theaterincolor challenge to promote change in the theatre and to properly diversify the experiences of theatregoers everywhere. You can check him out on Instagram @noah_jrkts.

Nick Szoeke is over the moon excited to join the Houston Symphony and Theatre Under The Stars in this beautiful concert! Nick has been seen around the US in regional houses such as Theatre Under The Stars (TX), The Public Theatre (TX), The Playhouse San Antonio (TX), Queensbury Theatre (TX), Coeur dâ&#x20AC;&#x2122;Alene Summer Theatre (ID), and The Trinity Repertory Company (RI). Favorite credits include Curly in Oklahoma!, Robert Kincaid in The Bridges of Madison County, and Quasimodo in The Hunchback of Notre Dame. You can also hear Nick on the upcoming release of the original cast recording of Sole Mates: The Musical set to debut in September. Nick is a diehard FRIENDS fan who never turns down a snow cone. A huge thank you to my family for believing in and supporting me on this journey. Insta:@hokeypokeyszoeke; www.nickszoeke.com.

Sean Holshouser is a 21-year-old baritone from Houston, TX. An undergraduate student at University of Houston’s Moores School of Music, Sean has already performed with the likes of TUTS’ Humphreys School of Musical Theatre, the Houston Grand Opera, HITS Theatre, the Houston Symphony, and the Grand Teton Music Festival in major performances as a soloist. The firstplace $3,000 winner in the Houston Grand Opera’s High School Voice Studio in May of 2019, Sean has also performed in over 30 productions at Houston’s HITS Theatre (including 3 starring roles at Miller Outdoor Theatre). Musical theatre roles include Billy Crocker in Anything Goes, The Baker in Into the Woods, Edward Rochester in Jane Eyre, Bobby Child in Crazy for You, Rev. Shaw Moore in Footloose, Ebenezer Scrooge in Scrooge, Sweeney Todd in Sweeney Todd, and Lord Farquaad in Shrek: The Musical; for the latter two of these, he received BroadwayWorld Award nominations in 2018 for Best Leading Actor and Best Supporting Actor in a Musical, respectively. He performed the National Anthem at the NCAA Division I Men’s Soccer College Cup Tournament in 2016, and similarly performed the Anthem at the start of the Houston Symphony’s 2017 “Star Spangled Salute” concert. He was an auditioned member of the St. Paul’s Choral Scholars and was the youngest auditioned member of the Houston Symphony Chorus, of which he is a 5-year member. His vocal YouTube channel currently has over 2.7 thousand subscribers, with his performance of “In Dreams” having over 200,000 views.

Alyssa Sunew is a 17-year-old student at TUTS’ Humphreys School of Musical Theatre and a senior at Seven Lakes High School in Katy, TX. She was the only student from Texas to be named a 2020 Finalist in Theater from the National YoungArts Foundation. As a musical theatre performer, Alyssa has performed in numerous professional and community productions with Theatre Under The Stars (Jerome Robbins Broadway, Spring Awakening, Oklahoma!, Memphis), the MUNY in St. Louis (Footloose), and HITS Theatre in Houston (Anything Goes, Side Show). She is a 2-year member of TMEA Texas All-State Choir, and studies voice and piano with Jeannine Rowden. 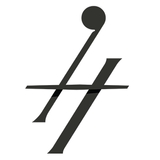