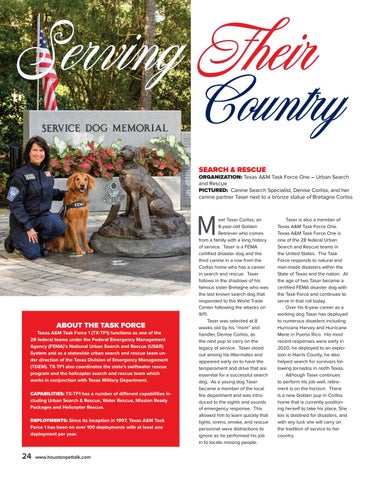 ABOUT THE TASK FORCE

Texas A&amp;M Task Force 1 (TX-TF1) functions as one of the 28 federal teams under the Federal Emergency Management Agency (FEMA)’s National Urban Search and Rescue (US&amp;R) System and as a statewide urban search and rescue team under direction of the Texas Division of Emergency Management (TDEM). TX-TF1 also coordinates the state’s swiftwater rescue program and the helicopter search and rescue team which works in conjunction with Texas Military Department. CAPABILITIES: TX-TF1 has a number of different capabilities including Urban Search &amp; Rescue, Water Rescue, Mission Ready Packages and Helicopter Rescue. DEPLOYMENTS: Since its inception in 1997, Texas A&amp;M Task Force 1 has been on over 100 deployments with at least one deployment per year.

eet Taser Corliss, an 8-year-old Golden Retriever who comes from a family with a long history of service. Taser is a FEMA certified disaster dog and the third canine in a row from the Corliss home who has a career in search and rescue. Taser follows in the shadows of his famous sister Bretagne who was the last known search dog that responded to the World Trade Center following the attacks on 9/11. Taser was selected at 8 weeks old by his “mom” and handler, Denise Corliss, as the next pup to carry on the legacy of service. Taser stood out among his littermates and appeared early on to have the temperament and drive that are essential for a successful search dog. As a young dog Taser became a member of the local fire department and was introduced to the sights and sounds of emergency response. This allowed him to learn quickly that lights, sirens, smoke, and rescue personnel were distractions to ignore as he performed his job in to locate missing people.

Taser is also a member of Texas A&amp;M Task Force One. Texas A&amp;M Task Force One is one of the 28 federal Urban Search and Rescue teams in the United States. The Task Force responds to natural and man-made disasters within the State of Texas and the nation. At the age of two Taser became a certified FEMA disaster dog with the Task Force and continues to serve in that roll today. Over his 6-year career as a working dog Taser has deployed to numerous disasters including Hurricane Harvey and Hurricane Marie in Puerto Rico. His most recent responses were early in 2020; he deployed to an explosion in Harris County, he also helped search for survivors following tornados in north Texas. Although Taser continues to perform his job well, retirement is on the horizon. There is a new Golden pup in Corliss home that is currently positioning herself to take his place. She too is destined for disasters, and with any luck she will carry on the tradition of service to her country. 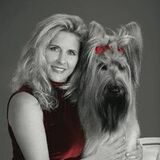