A / AS Level Psychology - 2 - MEDIA PSYCHOLOGY: Media and Persuasion 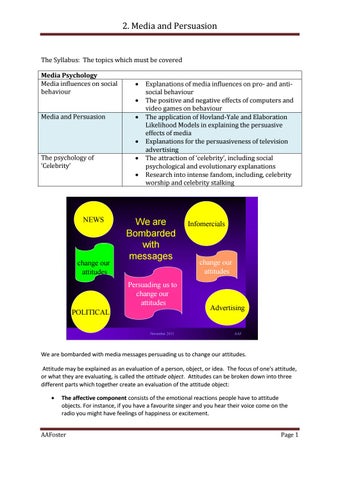 The Syllabus: The topics which must be covered Media Psychology Media influences on social behaviour

The psychology of ‘Celebrity’

Explanations of media influences on pro- and antisocial behaviour The positive and negative effects of computers and video games on behaviour The application of Hovland-Yale and Elaboration Likelihood Models in explaining the persuasive effects of media Explanations for the persuasiveness of television advertising The attraction of ‘celebrity’, including social psychological and evolutionary explanations Research into intense fandom, including, celebrity worship and celebrity stalking

We are Bombarded with messages Persuading us to change our attitudes

The affective component consists of the emotional reactions people have to attitude objects. For instance, if you have a favourite singer and you hear their voice come on the radio you might have feelings of happiness or excitement.

The behavioural component consists of actions or observable behaviour that is the result of an attitude object. If you hear a song you like on the radio then you might go home and research the singer so you can buy their album. You might then spend all your free time listening to this album. The attitude object has changed your behaviour and actions. The cognitive components are the thoughts and beliefs people have about an attitude object. For instance, you might like a singer because he or she has a melodic voice and catchy lyrics. You might also believe that the singer is a lot like you are which makes the music easier to relate to. The main purpose of the media is to persuade us to feel, behave and think in certain ways. Two models can be used to explain how effective the media can be.

Factors influencing persuasiveness of a message

Created by researchers at Yale University. It involves analysing who is making the communication, the quality of the communication and what kind of people the communication is intended for. This method of study has produced a lot of information about what makes people&#39;s attitudes change. It examines the: 1. Source of the Message: The Communicator The Model predicts that the effectiveness of a communicator would depend on his/her expertise, trustworthiness, likeability, status and race Features of the Message

2. Impact of message Depends on whether the appeal is emotional, the order in which arguments are presented: onesided or two–sided; whether there is an explicit (clear) conclusion Activity: Put forward arguments for the following: Teen pregnancy, the need for gun control, avoiding student debt; is there an alternative for prison? Which subject can you put forward in order to have the greatest appeal? 3. Characteristics of recipient The extent to which message produces attitude change depends on the recipient’s prior knowledge, their intelligence, personality, self-esteem and locus of control. 4. Recipients: People who are intelligent are more likely to understand and remember a message and become more evaluative and critical thereby reducing attitude change. On the other hand Hovland et al said persuasive communications produce changes within the recipients; these include changes in opinion, behaviour and emotion. People with high self-esteem are more likely to be persuaded by complex arguments backed up with evidence.

5. Channel: How the message is sent

Which has the greatest impact? How can the influence be increased?

A study of advertisements on TV will show that:  

Findings based on the Hovland-Yale Model: Hovland and Weiss (1951) examined the importance of the communication source. 

Participants were given information about drug taking and led to believe the source was a prestigious medical journal or newspaper.

The attitude change produced was greater when the source was thought to be the medical journal.

Trustworthiness is an important characteristic of the communication source. When the message source was untrustworthy individuals did more thorough processing of the message. Hovland et al (1949) also found that presenting both sides of the argument produced more attitude change than a one-sided broadcast. However attitude change depends on the nature of the communication and the characteristics of the recipient. Sturges and Rogers (1996) tested whether emotional messages were more persuasive. Young people were asked to listen to persuasive messages arguing that the dangers of smoking were either modest or great, and that it was either easy or hard to keep away from smoking. The greatest attitude change occurred among participants who were given a high threat message that the dangers of smoking were great arguing that avoidance was easy. Eagly and Carli found that women were more influenced by messages on topics which men were familiar. However the opposite was the case with messages on topics which women are familiar. Therefore familiarity and knowledge makes us less susceptible to attitude change. The Hovland-Yale theory predicts that individuals with high self esteem should be more resistant to attempts at persuasion than those with low self-esteem. However research has found that those with high self-esteem were as easy to persuade as those with low self-esteem. Those high in self esteem were unwilling to admit to having been persuaded. It has been found that the relationship between attitudes and behaviour to be weak. Findings by Wicker (1969) showed a correlation of +.15 between attitudes and behaviour.

The Hovland-Yale Model was the first approach to understand the factors responsible for attitude change. Many predictions of the model have been supported. However it is difficult to analyse the model. It appears to be weak, with very little substance and the results seem obvious. Most researchers testing the model have focussed on external factors, such as emotions and attractiveness, as leading to attitude change and ignored internal factors. The approach fails to say which aspects of a persuasive communication are more important than other aspects. For instance, are the arguments made in the communication more important than the person who is making the arguments, or vice versa?

The problems with the Yale Attitude Change approach have been addressed by the elaboration likelihood model, which explains two ways in which persuasive communication can cause attitudinal change:

Low personal relevance of the message

According to the model, recipients of message can be persuaded in two distinct routes:

1. Centrally - When a person is motivated and pays attention to the persuasive communication, they are being centrally affected. There is detailed consideration and elaboration of the message. People are likely to take this route when there is no distraction for them and they are truly interested in what the persuasive communication has to say. 2. Peripherally - When a person does not pay attention to the arguments in the speech but is Influenced by non-content aspects of message; eg the number of arguments, context eg attractiveness of communicator. When using this route little attention paid to the message. Those who are not motivated to pay attention to the arguments, but are interested in the surface characteristics of a message will not have an attitude change because of logic, but rather because of superficial aspects. This is called the peripheral route to persuasion. Some people have a need for cognition, meaning their personality is one that demands engaging and mind activating activities. Those with the need for cognition are much more likely to take the central route to persuasion since they like mulling over arguments and facts to reach their conclusions.

The central – peripheral routes were examined in the’ M&amp;M’ study by Lanmers (2000).

In the 1980s M&amp;M’s sold in the USA were relaunched with new packaging with the claim “new larger pack”. This was true but the pack contained fewer M&amp;M’s than the original. The new design was dropped after complaints.

Lanmers investigated the impact of the deception on consumers using ELM. 40 undergraduates took part in a study they were told was about ‘candy preferences’. Participants were first assessed for attitudes towards M&amp;M’s (‘involvement’) using the Personal Involvement Inventory. They were then shown either the deceptive M&amp;M’s (and informed of the deception) or the original M&amp;M packaging. They were asked to indicate on a scale of 0% to 100% the likelihood they would buy M&amp;M’s within the next 30 days. Findings: Those deceived and assessed as low in involvement rated their intention to purchase lower than participants assessed as highly involved. Conclusion: He argued that people who are highly involved with the product were more likely to disregard package deception as they consider such peripheral things as secondary to the central values of M&amp;M’s – they tasted good. On the other hand those people with low involvement more susceptible to peripheral cues like package deception when considering future purchase (Holt &amp; Lewis 2009)

Evaluation: The participants were deceived and not told truth about the study; sample size quite small; students therefore difficult to generalise; however many young people do eat M&amp;Ms. However if the idea of advertisements is to encourage people to buy it would be difficult to persuade new people due to the deception. One consequence for people involved in marketing who may be tempted to deceive in a similar way is that they could lose a lot of potential new buyers. AAFoster

message repetition is an example of elaboration

The influence of prior knowledge

What is the role of arousal. how does it work ?

Make comments of your own

Raises emotions in order to encourage people to like the product e.g. music ........

Elaboration best when info can be related to self

How important is the type of media used in persuasive advertising?

What determines which processing route will be taken?

They use central route if motivation and ability are high: If interested in topic &amp; possess relevant knowledge likely to use central processing

•She might influence attitude change via peripheral route because attractiveness creates a positive association with the shampoo.

•The use of attractive model might increase recipients motivation to attend to her message.

•Represents clear progress compared to HovlandYale •Two routes are more realistic than one •It is important to know that attitude change often depends on contextual information, i.e. likeability of communicator. •The impact of any factor varies from situation to situation has received support and is an advance on Hovland-Yale model. WEAKNESSES:

•The notion of two forms of processing is oversimplified. Petty said, It is better to view the central and peripheral routes as falling along a continuum of attitude change strategies •It is assumed that central and peripheral processes can occur at the same time. But it is not clear how. •The model is complex. It is difficult to predict which processing route will be used by most people

Do persuasive messages influence you via the central or the peripheral route? Image of Batman used in the Got Milk Campaign designed to encourage audience to buy milk without having to think about its benefits. Which route?

Explanations for the persuasiveness of television advertising is on the powerpoint.

A / AS Level Psychology - 2 - MEDIA PSYCHOLOGY: Media and Persuasion

A / AS Level Psychology - 2 - MEDIA PSYCHOLOGY: Media and Persuasion Psychology in Action - Media 2 of 4 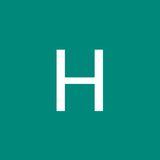