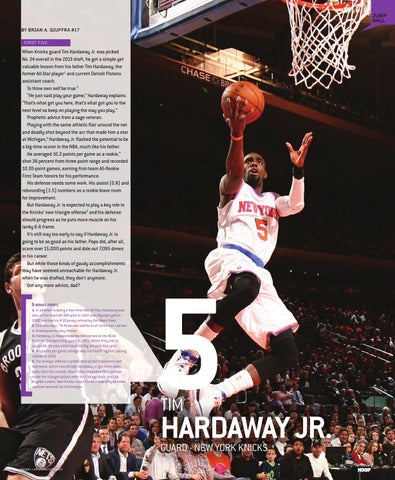 When Knicks guard Tim Hardaway Jr. was picked No. 24 overall in the 2013 draft, he got a simple yet valuable lesson from his father Tim Hardaway, the former All-Star player1 and current Detroit Pistons assistant coach. To thine own self be true.2 “He just said play your game,” Hardaway explains. “That’s what got you here, that’s what got you to the next level so keep on playing the way you play.” Prophetic advice from a sage veteran. Playing with the same athletic ﬂair around the net and deadly shot beyond the arc that made him a star at Michigan,3 Hardaway Jr. ﬂashed the potential to be a big-time scorer in the NBA, much like his father. He averaged 10.2 points per game as a rookie,4 shot 36 percent from three-point range and recorded 10 20-point games, earning ﬁrst-team All-Rookie First Team honors for his performance. His defense needs some work. His assist (0.8) and rebounding (1.5) numbers as a rookie leave room for improvement. But Hardaway Jr. is expected to play a key role in the Knicks’ new triangle offense5 and his defense should progress as he puts more muscle on his lanky 6-6 frame. It’s still way too early to say if Hardaway Jr. is going to be as good as his father. Pops did, after all, score over 15,000 points and dole out 7,095 dimes in his career. But while those kinds of gaudy accomplishments may have seemed unreachable for Hardaway Jr. when he was drafted, they don’t anymore. Got any more advice, dad? BONUS POINTS 1. In addition to being a ﬁve-time NBA All-Star, Hardaway was also a First Team All-NBA pick in 1997, won Olympic gold in 2000 and has his #10 jersey retired by the Miami Heat. 2. Polonius says, “To thine own self be true” to his son Laertes in Shakespeare’s play Hamlet. 3. Hardaway Jr. helped lead the Wolverines to the NCAA National Championship game in 2013, where they lost to Louisville. He was a ﬁrst-team All-Big-Ten pick that year. 4. His points per game average was the fourth highest among rookies in 2014. 5. The triangle offense is predicated on ball movement and teamwork, which should help Hardaway Jr. get more open looks from the outside. New Knicks president Phil Jackson made the triangle famous with the Chicago Bulls and Los Angeles Lakers. New Knicks coach Derek Fisher played under Jackson and will run the triangle. 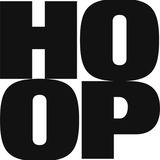