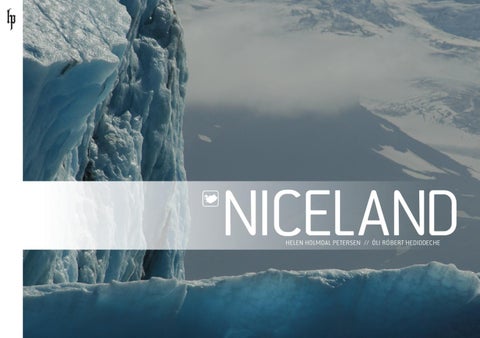 Iceland Explorer offers you experiences for life, made by heart. Our travel agents have a passion for Iceland and will make your personal dream trip. Explore Iceland by Heart! www.icelandexplorer.dk

Just Framing what is allready there 6 // nICELAND

Reykjavík // Smoke Bay Reykjavík is believed to be the location of the first permanent settlement in Iceland, which Ingólfur Arnarson is said to have established around 874 C.E.

Nature that is not playing hard to get 14 // nICELAND

Heating The first house to be warmed up by hot water from the underground was built in 1927, and today approximately 95% of all houses are heated by geothermal power plant stations.

An immense amount of Limitless nothing nICELAND // 19

Warm from the inside out 20 // nICELAND

geysirs The word geyser originates from Geysir, an erupting spring at Haukadalur, named from the Icelandic verb geysa, â&amp;#x20AC;?to gushâ&amp;#x20AC;?, which is a verb from Old Norse. Geyser-areas in Iceland were formed by earthquakes. The Great Geysir (the second biggest one in the world, it stood up to 90 meters tall) stopped erupting in 2000, but Strokkur (30 meters) is still alive and spraying.

Son and Dóttir All Icelanders are named as to clearly reflect that they are “daughter of” or “son of”. For example Gurún Halldórsdóttir is the daughter of Halldór Jökullsson who is the son of Jökull Sóleyjarson. And Gurúns son could be Óli Gurúnsson.

Bj贸r From 1 March 1989 Icelanders were officially allowed to drink light beer (1% alcohol) and able to buy it legally. So in the first years of pubs it was light beer and vodka in the drafts.

The shooting sound of silence 34 // nICELAND

Water The water in Iceland is very pure and tasty, and drinkable everywhere. So donâ&amp;#x20AC;&amp;#x2122;t buy it, just drink it.

Myth According to Norse myth, the beginning of life was fire and ice, with the existence of only two worlds: Muspelheim and Niflheim. When the warm air of Muspelheim met the cold ice of Niflheim, the giant jรถtunn ร mir and the icy cow Auรฐhumla were created.

Amen! 80% of the population belong to the Lutheran church. 80% believe that elves exist.

the endless changes of The landscapes 48 // nICELAND

An overwhelming abundance of beauty nICELAND // 51

GLACIERS Glaciers cover 11% of Iceland’s total area – Vatnajökull, the biggest glacier in Europe, in itself covering around 9%.

changing of landscape Vigdís Finnbogadóttir was the first elected women president in the world (1980). Today the prime minister is a woman, Jóhanna Sigurðardóttir. The bishop of the Lutheran church is a women, Agnes M. Sigurðardóttir.

WEATHER The weather changes fast in Iceland. So if you donâ&amp;#x20AC;&amp;#x2122;t like the weather, just wait 10 minutes. If will often rain or snow 10 times a day, and only 10 days a year where the Sun gets to shine all day.

there is a reason for all that happens 64 // nICELAND

EYJAFJALLAJĂ&amp;#x2013;KULL Probably the most famous volcano around after the eruption in April 2010, that caused enormous disruption to air travel across western and northern Europe for many days. Leading to an enormous output of humorous comments in regard to the icesave dispute asking Icelanders to send cash, not ash.

Meltdown According to some scientific researchers the glaciers in Iceland will disappear during the next 50 years. When glaciers go, the risk of more eruptions increases. Beware!

Obey nature and stand together 74 // nICELAND

wiseland The Norwegian Hrafna Fl贸ki named Iceland because he saw an iceberg floating far away in the sea. And Erik the Red was the smart guy who named Greenland, so it would be more attractive for farmers to move there.

JÖKULSÁRLÓN The large glacial lagoon Jökulsárlón was formed in the 1930s. At first farmers went there to hunt seals and fish trout. Now hundreds of people come here daily to sail around the icebergs and spot the seals.

JÓLASVEINN Santa Claus in Iceland has competetion from the Jólasveinar, believed to be 13 sons of the evil troll Grýla. Originally scary and mean, with time they changed and all became good. Each morning the last 13 days before Christmas, all kids will put their shoes in the window and receive small gifts if they behave well, otherwise they will get a potato.

coherence between man and nature 92 // nICELAND

MORE SHEEP THAN MEN In Iceland there are more sheep (about half a million) than people. They walk around freely in the landscape during the summer months and in September the farmers collect them. All are marked so it is easy to see whom they belong to. The free conditions make for extremely tender and tasteful lamb and mutton.

Nothing must be a synonym of everything 98 // nICELAND

Foss There are more waterfalls (called fosses) than trees in Iceland. It is said that Icelanders call of gathering of more than three trees a forest. So if you ever get lost in an Icelandic forest ... stand up!

The power of natural beauty 112 // nICELAND

The sound of iceland In Iceland there are more bands than cars in the garage. You might have heard some of them like BjĂśrk, Sigur RĂ˛s, Of Monsters and Men.

loose yourself in the strange and desolate landscapes 124 // nICELAND

The clean air The air of Iceland is so pure that often it makes distant things seem much closer than they actually are.

Thank you! your name is tattooed in my heart 128 // nICELAND

Just Framing what is allready there

Photobook: Just framing what is allready there 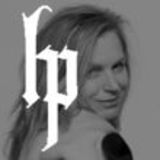