Who Is The Ganja Witch From Thailand? 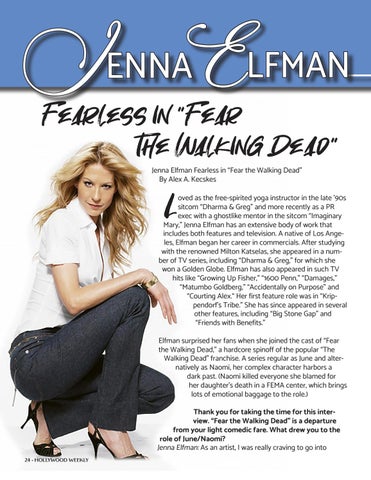 oved as the free-spirited yoga instructor in the late &#39;90s sitcom “Dharma &amp; Greg” and more recently as a PR exec with a ghostlike mentor in the sitcom “Imaginary Mary,” Jenna Elfman has an extensive body of work that includes both features and television. A native of Los Angeles, Elfman began her career in commercials. After studying with the renowned Milton Katselas, she appeared in a number of TV series, including “Dharma &amp; Greg,” for which she won a Golden Globe. Elfman has also appeared in such TV hits like “Growing Up Fisher,” “1600 Penn,” “Damages,” “Matumbo Goldberg,” “Accidentally on Purpose” and “Courting Alex.“ Her first feature role was in “Krippendorf&#39;s Tribe.” She has since appeared in several other features, including “Big Stone Gap” and “Friends with Benefits.” Elfman surprised her fans when she joined the cast of “Fear the Walking Dead,” a hardcore spinoff of the popular “The Walking Dead” franchise. A series regular as June and alternatively as Naomi, her complex character harbors a dark past. (Naomi killed everyone she blamed for her daughter’s death in a FEMA center, which brings lots of emotional baggage to the role.) Thank you for taking the time for this interview. “Fear the Walking Dead” is a departure from your light comedic fare. What drew you to the role of June/Naomi? Jenna Elfman: As an artist, I was really craving to go into 24 • HOLLYWOOD WEEKLY

Who Is The Ganja Witch From Thailand?

The Ganja Witch is none other than the world renowned natural cancer therapy practitioner Dr. Gamhom Nalanchang. Dr. Gamhom serves as the President and Founder of Cancer Hope Village in Laos and Thailand. Read the story. Order this issue before it hits newsstands, worldwide.