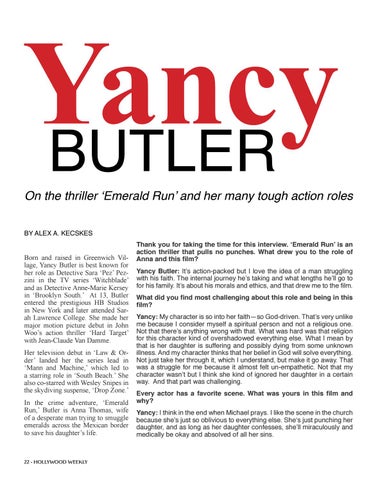 On the thriller ‘Emerald Run’ and her many tough action roles

BY ALEX A. KECSKES

Born and raised in Greenwich Village, Yancy Butler is best known for her role as Detective Sara ‘Pez’ Pezzini in the TV series ‘Witchblade’ and as Detective Anne-Marie Kersey in ‘Brooklyn South.’ At 13, Butler entered the prestigious HB Studios in New York and later attended Sarah Lawrence College. She made her major motion picture debut in John Woo’s action thriller ‘Hard Target’ with Jean-Claude Van Damme. Her television debut in ‘Law &amp; Order’ landed her the series lead in ‘Mann and Machine,’ which led to a starring role in ‘South Beach.’ She also co-starred with Wesley Snipes in the skydiving suspense, ‘Drop Zone.’ In the crime adventure, ‘Emerald Run,’ Butler is Anna Thomas, wife of a desperate man trying to smuggle emeralds across the Mexican border to save his daughter’s life.

Thank you for taking the time for this interview. ‘Emerald Run’ is an action thriller that pulls no punches. What drew you to the role of Anna and this film? Yancy Butler: It’s action-packed but I love the idea of a man struggling with his faith. The internal journey he’s taking and what lengths he’ll go to for his family. It’s about his morals and ethics, and that drew me to the film. What did you find most challenging about this role and being in this film? Yancy: My character is so into her faith—so God-driven. That’s very unlike me because I consider myself a spiritual person and not a religious one. Not that there’s anything wrong with that. What was hard was that religion for this character kind of overshadowed everything else. What I mean by that is her daughter is suffering and possibly dying from some unknown illness. And my character thinks that her belief in God will solve everything. Not just take her through it, which I understand, but make it go away. That was a struggle for me because it almost felt un-empathetic. Not that my character wasn’t but I think she kind of ignored her daughter in a certain way. And that part was challenging. Every actor has a favorite scene. What was yours in this film and why? Yancy: I think in the end when Michael prays. I like the scene in the church because she’s just so oblivious to everything else. She‘s just punching her daughter, and as long as her daughter confesses, she’ll miraculously and medically be okay and absolved of all her sins.