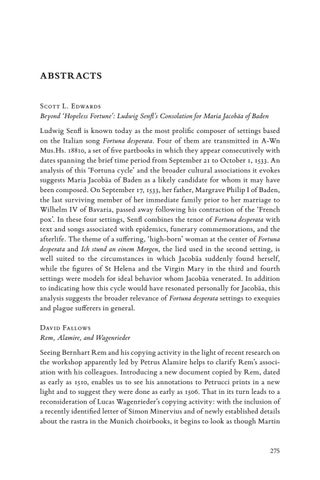 ABSTRACTS Scott L. Edwards Beyond ‘Hopeless Fortune’: Ludwig Senfl’s Consolation for Maria Jacobäa of Baden Ludwig Senfl is known today as the most prolific composer of settings based on the Italian song Fortuna desperata. Four of them are transmitted in A-Wn Mus.Hs. 18810, a set of five partbooks in which they appear consecutively with dates spanning the brief time period from September 21 to October 1, 1533. An analysis of this ‘Fortuna cycle’ and the broader cultural associations it evokes suggests Maria Jacobäa of Baden as a likely candidate for whom it may have been composed. On September 17, 1533, her father, Margrave Philip I of Baden, the last surviving member of her immediate family prior to her marriage to Wilhelm IV of Bavaria, passed away following his contraction of the ‘French pox’. In these four settings, Senfl combines the tenor of Fortuna desperata with text and songs associated with epidemics, funerary commemorations, and the afterlife. The theme of a suffering, ‘high-born’ woman at the center of Fortuna desperata and Ich stund an einem Morgen, the lied used in the second setting, is well suited to the circumstances in which Jacobäa suddenly found herself, while the figures of St Helena and the Virgin Mary in the third and fourth settings were models for ideal behavior whom Jacobäa venerated. In addition to indicating how this cycle would have resonated personally for Jacobäa, this analysis suggests the broader relevance of Fortuna desperata settings to exequies and plague sufferers in general. David Fallows Rem, Alamire, and Wagenrieder Seeing Bernhart Rem and his copying activity in the light of recent research on the workshop apparently led by Petrus Alamire helps to clarify Rem’s association with his colleagues. Introducing a new document copied by Rem, dated as early as 1510, enables us to see his annotations to Petrucci prints in a new light and to suggest they were done as early as 1506. That in its turn leads to a reconsideration of Lucas Wagenrieder’s copying activity: with the inclusion of a recently identified letter of Simon Minervius and of newly established details about the rastra in the Munich choirbooks, it begins to look as though Martin

Bente’s 1968 analysis was correct with just one tiny modification, namely that this too was a workshop with several scribes involved, albeit probably led by Wagenrieder. Wolfgang Fuhrmann Senfl’s Quid vitam sine te and the Consolations of Music Ludwig Senfl’s motet Quid vitam sine te mourns the death of Anna Rehlinger, the wife of Augsburg patrician Christoph Ehem. The motet’s text (by the humanist Johannes Koler) is divided into two parts: in the first, Ehem laments the death of his wife; and in the second, Anna herself answers him from Heaven. In this paper, I first investigate Salminger’s possible intentions in editing this print – especially with regard to the inclusion of Quid vitam sine te. The figure of Christoph Ehem, who most likely commissioned Senfl’s motet, is hereby placed in its historical context. Furthermore, the rhetorical device used in the text (the dead consoling the living) is contextualized in a consideration of both confessional and gender-related implications. Finally, I analyze Senfl’s motet with special attention to Senfl’s approach to mode (Phrygian), metrics (elegiac distichs), and text expression. Andrea Horz Hymns and Metre around 1500 in the German-speaking lands Conrad Celtis’s Melopoiæ (1507) have already been located in a variety of contexts. However, the Christian facet of Celtis’s print has gone unnoticed so far. In this article, I argue that Celtis’s strictly metrical four-part settings are also part of the humanist claim to reform liturgical practice. Even Celtis wanted to offer models for the Christian-sacral sphere with his Melopoiæ, which reflect in music the humanist work of his colleagues and students on the metres of the hymn texts. Birgit Lodes Horizons of Listening in Augsburg: Senfl’s Missa super Nisi Dominus as Christo­ logical Exegesis of a Psalm in the Time of Early Confessional Pluralism In this article, I argue that Senfl composed his four-voice motet Nisi Dominus (ps. 127) and his only parody mass, the Missa super Nisi Dominus for the sumptuous wedding of Anton Fugger and Anna Rehlinger in March 1527. The pieces were performed by 28 singers in the Augsburg cathedral.

Martin Luther’s German exegesis of this psalm, printed in 1524, might well have served as an initial source of inspiration for the choice of text, and even for the specific architecture of the pieces. The concern, however, for a new understanding of the Book of Psalms in humanistic circles (promoted by such varying personalities as Erasmus, Luscinius, Fugger, Luther, and Senfl) also forms a broader and more comprehensive framework for understanding these psalm compositions: Senfl’s Mass setting can be perceived intertextually as a christological interpretation of the psalm. This innovative kind of Bible-based polyphonic music must have been heard in Augsburg in 1527 as a plea for polyphonic music in sacred services, a practice rejected by Zwinglians, but supported by Lutherans and Catholics alike. Grantley McDonald Meet Mrs Senfl This chapter explores Senfl’s social surroundings and status from the perspective of his two wives. New documentary evidence presented here dates his first marriage to early 1527. It also describes the social position of his first wife in the upwardly-mobile mercantile Neunburger family of Passau, where Senfl was working temporarily at the Augustinian monastery of St Nikola. It also suggests that Senfl’s second wife Maria Halbhirn was probably related to one or more of the several men of the same surname who worked in close proximity to Senfl, such as Conrad Halbhirn, who had dealings with Georg Slatkonia, Maximilian’s chapel master, or Georg Halbshirn, a hunter in the employment of the Dukes of Bavaria. Such data provide suggestive information about the social status and mobility of non-clerical members of imperial or ducal chapels. Grantley McDonald and Sanna Raninen The Songbooks of Peter Schöffer the Younger and Arnt von Aich: A Typographical Assessment In this chapter we argue that the songbook of Arnt von Aich is a composite pirate reprint of two or more lost editions by Peter Schöffer the Younger. The decorative initials, the style of script in the text incipits and the staff height of Arnt’s woodcut music notation closely resemble Schöffer’s surviving music books. Arnt’s woodcuts, though imperfect copies of Schöffer’s pages, nevertheless provide important information about the development of Schöffer’s music typography. Since Arnt’s renderings of Schöffer’s originals contain several elements not found in Schöffer’s surviving music books, such as variant clefs and custodes, we posit that the originals copied by Arnt predate the earliest

extant polyphonic music books by Schöffer (1513). Moreover, we propose that one of the originals pirated by Arnt was a reprint of Oeglin’s Sixty-eight songs (c. 1512/13?) printed by Schöffer himself. The poor musical readings in the twenty-six concordant songs may indicate that this lost Schöffer edition was one of the first he attempted, before he or his compositor was in full technical control of the process of setting mensural notation in type. The presence of ‘undesirable’ features such as the collision of note-stems, decorative initials and underlaid text in Arnt’s woodcut renderings of Schöffer’s pages also suggests that these lost collections were early products of Schöffer’s musical output, since he consciously strove to avoid such infelicities in his 1517 songbook. Although these findings do not provide the basis for dating Arnt’s book precisely, they provide a terminus post quem of about 1512. Kateryna Schöning Intabulation as an Intertextual Dialogue: Lute Intabulations from the Krakow Lute Tablature UKR-LVu 1400/I Using the Krakow lute tablature UKR-LVu 1400/I (around 1550–92) as an example, the paper examines the possible application of the concept of intertextuality in literary studies to the field of instrumental intabulations. As a methodological basis, a summary model of literary intertextuality (Manfred Pfister) and particularly structuralist and hermeneutical theories (especially those from Gérard Genette) are used, based on the relationships between the texts or groups of texts: the relationship between the text of the original vocal model and the text of the intabulation is discussed in reference to the technique of so-called ‘literal’ intabulation (i.e. with little or no added embellishment). It becomes apparent that an intabulation is not a mere transcription of a vocal piece. In parallel with the field of literature, intabulations illustrate the work with all syntactic, stylistic, formal-compositional, and instrumental-idiomatic components in a dialogue between the text and the recipient. One can as well observe intertextual techniques such as citation, paraphrase, insertion, omission, and compression. In order to grasp the intensity of the reception and the position of the intabulator in relation to the original vocal material, an attempt is made to apply Genette’s intertextual dialogue in the forms of ‘through’, ‘beside’, and ‘across’ to the pretext.

Johannes Schwarz Bernhard Rem’s organ books Bernhard Rem, member of an old Suevian merchant family, was organist in the service of Jakob Fugger at the Augsburg Carmelite monastery St Anne. He is mainly known as the author of a pamphlet, in which he espouses the Lutheran doctrine. Recently, he has been identified as the scribe of several polyphonic manuscripts from the circle of Ludwig Senfl. The objects of comparison for this attribution are four liturgical manuscripts, demonstrably written by Rem during the second decade of the 16th century and connected to his occupation as organist. They contain plainchant with only little text underlayed, except for the incipits. Furthermore, only the parts that might have been performed by the organ in alternatim practice are notated. These manuscripts are the oldest among those known today with such a strong reference to organ practice. They are of great interest as they reveal details of this practice, such as the repertory and disposition of chants and the use of musica ficta. Examination of the repertoire shows different connections between the several manuscripts as well as to the rite of the Carmelite order and the Augsburg diocese, and therefore to St Anne, the place of Bernhard Rem’s employment. No other liturgical sources from this monastery seem to have survived – hence, Bernhard Rem’s organ books are the only evidence for the Augsburg Carmelite liturgy. Nicole Schwindt The Fabulous Five. Well-known Facts and Some News on Senfl’s Colleagues A few years after the dissolution of the Imperial Chapel following Maximilian’s death in 1519, five former colleagues find themselves at the Bavarian court of Duke Wilhelm IV. The first to gain employment at the chapel was the trombonist Hans Steudel, followed by the singers Ludwig Senfl, Caspar Pircker, and eventually Lucas Wagenrieder. They all promoted their careers through the manufacture of portrait medals. The one representing Pircker is shown in a hitherto unknown moulding from Tartu, Estonia. Last but not least, Senfl provided assistance in Munich to his choirboy friend Hans Türkhamer. Tracing the entangled biographies of these five musicians and the long-lasting connections of chapel members, it is possible to demonstrate the importance of personal relationships in the Early Modern era.

Sonja Tröster A Song for a Lady from Augsburg: ‘Kein Adler in der Welt so schön’ During the first half of the 16th century, several settings based on the lied Kein Adler in der Welt so schön were composed; 18 of them are known today. Those compositions can be roughly divided into two groups: settings with German text composed around 1535 (among them five settings by Ludwig Senfl) and settings with Latin or French text composed in the 1540s. One of the lied settings is transmitted in a hitherto little-known source: five circular drawings (D-ERu Graphische Sammlung, Inv.­nos. B 1064–1068), each presenting a musician in front of a large panel with musical notation. By means of a coat of arms on those drawings, it is now possible to identify the initial addressee of Kein Adler. Her name is Katharina Adler, she was the daughter of a wealthy Augsburg merchant, and it is very likely that several of the German-texted settings were commissioned for her wedding to a Silesian nobleman in 1534. 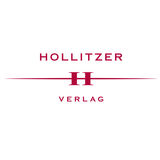